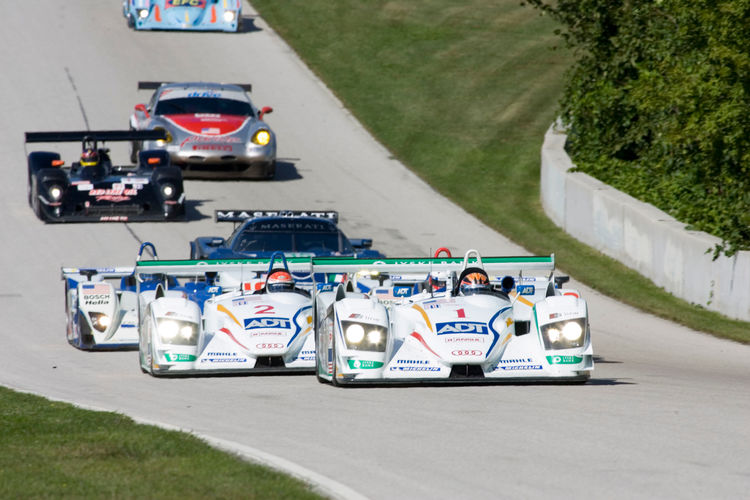 Audi does not only have its first “match ball” on the opening weekend of October in the DTM: At the “Petit Le Mans” race in Road Atlanta (US state of Georgia) the Audi works drivers Frank Biela and Emanuele Pirro could clinch the American Le Mans Series (ALMS) title early. Biela/Pirro lead Lola driver Andy Wallace by 18 points with just two ALMS races to go, they can not be ousted from the head of the drivers championship if they arrive at the finale in Laguna Seca (15 October) with a lead of more than 20 points.

For Audi it is not only a matter of winning the title with a race to spare. Petit Le Mans is the last important endurance race of the year and, alongside the 12 Hours of of Sebring and the 24 Hours of Le Mans, one of the three sportscar highlights. The Audi R8 has never been beaten at Petit Le Mans – and, if possible, this successful run should continue at its sixth appearance.

The American Audi importer team ADT Champion Racing competes with two Audi R8 prototypes, which are driven by JJ Lehto/Marco Werner and Frank Biela/Emanuele Pirro. Dave Maraj’s team has won the US endurance classic twice in succession and could, as a result, score a second hat-trick: Champion Racing has already won at Sebring and Le Mans this year. In 2002, the Audi factory team Joest Racing was the last team to win all three long distance classics in the same year. Furthermore, JJ Lehto and Marco Werner have the chance to become the first drivers in the history of Petit Le Mans to win the race three times in succession.

JJ Lehto (Team ADT Champion Racing Audi R8 #1): “I’ve driven four times with the Audi R8 in Road Atlanta already, and have won Petit Le Mans twice, so I certainly want to win for a third consecutive time particularly as no other driver has managed this before. It would also be a great feeling to have won the three most important sportscar races of the year: The 12-hours of Sebring, the 24 Hours of Le Mans and Petit Le Mans.”

Marco Werner (Team ADT Champion Racing Audi R8 #1): “JJ and I have no real chance of winning the championship – so it’s now only a question of winning individual races. A Petit Le Mans victory would be some consolation for all the bad luck that we’ve had recently. However, what’s more important is that we make sure that the Audi R8 remains unbeaten in what will probably be its last Petit Le Mans race.”

Frank Biela (Team ADT Champion Racing Audi R8 #2): “Road Atlanta is a fantastic track for the Audi R8, even if we had a few problems with the set-up during the race in April. However, after some good races we are now leading the championship which makes us optimistic. Petit Le Mans is a very long race at which the last two hours are of particular importance.”

Emanuele Pirro (Team ADT Champion Racing Audi R8 #2): “Our main target is to get to the finish. Petit Le Mans is a very tricky and demanding race. The two of us drive for ten hours. There are usually lots of incidents because overtaking is difficult. I have fond memories of Petit Le Mans, because I clinched the Drivers’ Championship here with a win in 2001.”

Dave Maraj (Team owner Team ADT Champion Racing): “It’s clear that we want to win Petit Le Mans. I think that we’ll be better than our rivals over the distance, which doesn’t mean however that we’ve already won the race. If we win, it would be a hat-trick for Champion Racing, which would be fantastic.”

Dr Wolfgang Ullrich (Head of Audi Motorsport): “The championship could be decided already at Road Atlanta. As at Sebring, additional points are awarded. Petit Le Mans holds a very special place in the American Le Mans Series calendar because of its long distance. It would be fantastic if we could also win the last endurance classic of the season with the R8."