Audi: full speed ahead in motorsport too 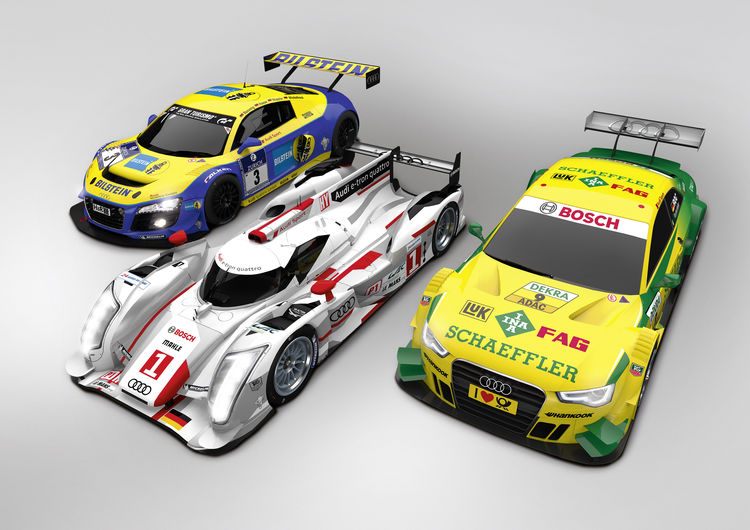 With more than 1.34 million worldwide deliveries, Audi equaled last year’s sales record after only eleven months. And in motorsport, the brand with the four rings continues to charge full speed ahead too. The title defense in the FIA World Championship (WEC), the commitment in the DTM and extended activities in US racing are particularly in focus in the 2013 season.

“Successful motorsport is part of our brand DNA,” stated Wolfgang Dürheimer, Member of the Management Board for Technical Development at AUDI AG, on Wednesday night at the “Audi Sport Finale” held at the Audi Forum Ingolstadt. “The victories on the world’s race tracks underscore our technical expertise in a particularly authentic way – and they strengthen our position on the most important world markets.”

In the FIA World Endurance Championship (WEC), Audi is competing as the title defender in 2013. Audi Sport Team Joest will be fielding two updated Audi R18 e-tron quattro cars, a third R18 e-tron quattro will be running at the Le Mans 24 Hours and the WEC race at Spa.

At Le Mans and in the WEC, Audi is thus exclusively banking on hybrid technology that was successfully introduced in 2012. The flywheel energy storage system is becoming even more powerful without any substantial increase in weight and size. Strictly in terms of its exterior, the Audi R18 e-tron quattro will hardly differ from this year’s winning car although numerous technical innovations are again assembled under the vehicle’s ultra-light carbon fiber skin. In a parallel project, Audi Sport is already intensively working on the successor car for the new LMP1 regulations that will come into effect as of 2014.

Contrary to the WEC, the technology in the DTM was frozen for the 2013 season by the regulations. Therefore, Audi Sport’s DTM squad is primarily concentrating on unlocking the Audi A5 DTM’s full potential by the time the season opens at the Hockenheimring on May 5. “We’re convinced that we were clearly beaten below our capabilities in 2012,” stresses Head of Audi Motorsport Dr. Wolfgang Ullrich. “In the DTM it’s about a few tenths of a second – and we need to find these few tenths in 2013 with the A5 DTM.”

A strengthened driver lineup is to support this endeavor. In the Briton Jamie Green (30), Audi has signed one of the quickest present-day DTM drivers. “Together with our established drivers and stars we should be in an even better position than before,” adds Dr. Wolfgang Ullrich.

Remaining on board are the two-time DTM Champions, Mattias Ekström (Sweden) and Timo Scheider (Germany), Race of Champions winner Filipe Albuquerque (Portugal), the two-time season winner Edoardo Mortara (Italy), Le Mans winner Mike Rockenfeller (Germany) and youngster Adrien Tambay (France), who by finishing the round at Valencia as the runner-up immediately clinched a podium position in his first DTM season. The decision about filling the eighth cockpit is still pending.

Factory drivers from the WEC and the DTM are playing a role in AUDI AG’s customer sport program as well. In the 24-hour race at Daytona (Florida) on January 26/27, Filipe Albuquerque, Oliver Jarvis and Edoardo Mortara will be driving an Audi R8 GRAND-AM of the Alex Job Racing team. The cockpits of two other R8 cars will be occupied by high-caliber racers as well. Marc Basseng, René Rast and Frank Stippler will be driving for APR Motorsport, Frank Biela, Christopher Haase and GT1 World Champion Markus Winkelhock for Rum Bum Racing. In addition, each squad will be joined by an American driver.

With the 24-hour race at Daytona and an intensified commitment in the GRAND-AM Series, Audi is ringing in its return to US racing. In the United States, the brand with the four rings is recording stronger growth than the US market as a whole, particularly in the prestigious large-premium-car segment. The racing activities in the United States are intended to support this trend over the long run.

Therefore, an entry of the Audi R18 e-tron quattro in the 12-hour race at Sebring (Florida), which Audi has won on ten occasions, on March 16 is in planning as well. “It looks like this may be the last opportunity to compete with an LMP1 car at Sebring,” says Head of Audi Motorsport Dr. Wolfgang Ullrich. “We’d really like to use this chance and say goodbye to the fans with a nice showing after our fantastic success story in recent years.”

This may not have to be a final farewell, though. In 2014, the GRAND-AM Series and the American Le Mans Series will merge to form a new North American Sports Car Championship that might be of interest to Audi. Furthermore, the US fans will have another opportunity in 2013 to watch the Audi R18 e-tron in action as the FIA World Endurance Championship (WEC) will visit Austin (Texas) on September 22.

But Audi is not neglecting the customer sport market in Europe and the rest of the world either. An evolution version of the Audi R8 LMS ultra GT3 sports car that mainly differs from the current model in the area of the rear section will start to be delivered to customers by quattro GmbH in February 2013.

Customer teams supported by Audi Sport customer racing will be competing in the 24-hour races at the Nürburgring (Germany) and at Spa-Francorchamps (Belgium) in 2013. The increasingly diverse customer sport program of AUDI AG will be complemented by the Audi R8 LMS Cup in China that was successfully launched in 2012.

“We’ve got a very attractive offering for our customers with the updated versions of the R8 GRAND-AM and the R8 LMS ultra plus the Cup in China,” says Romolo Liebchen, Head of Audi Sport customer racing. “We’re expecting to deliver the 100th customer car during the course of 2013.”