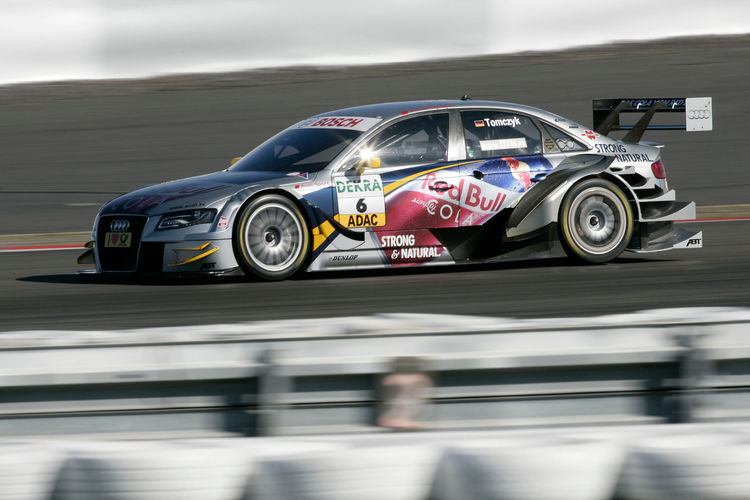 Audi continued its impressive string of pole positions in the DTM at the Nürburgring as well. For the eighth time in a row, an Audi A4 DTM will start from grid position one in the most popular international touring car series. DTM history has so far only seen such a string of fastest times in qualifying twice: In 2002/2003 by Mercedes and in 2007/2008 also by Audi.

In mid-summer weather conditions with air temperatures of almost 30 and track temperatures of 40 degrees centigrade, the Audi drivers set the pace from the outset on Saturday. In the morning’s free practice, the first six positions went to Audi. In qualifying, as many as six Audi drivers managed the leap into the top eight.

The driver who by far outperformed everyone else was Martin Tomczyk from Audi Sport Team Abt Sportsline. By posting fastest times in free practice and in three of the four qualifying sections, the 2007 Nürburgring winner emphasized that the 3.629-kilometer sprint track in the Eifel suits him particularly well. In the crucial shoot-out for the top four grid positions he set a commanding best time of the day at 1m 23.489s, relegating Mercedes driver Bruno Spengler to grid position two by almost two tenths of a second.

“I’m overjoyed,” beamed the 27-year-old driver from Rosenheim after clinching his seventh pole position in the DTM. “At the moment I’m on a roll, it seems like just about everything I set out to do is successful. My Audi was perfect again today. The team performance was strong as well so that the grid tomorrow will present a great picture for the Audi fans.”

Mattias Ekström and Timo Scheider will share the second row on Sunday (starting at 1:45 pm – local time – live on “Das Erste”). The two Audi drivers thus have optimum chances of taking the lead of the standings since the current leader, Gary Paffett (Mercedes), failed as early as in the first part of qualifying and will start from position 16, behind all nine Audi “factory” drivers.

The quickest driver of a year-old car was again the Briton Oliver Jarvis, who secured fifth place on the grid for Audi Sport Team Phoenix at its home round. Markus Winkelhock and Tom Kristensen on positions seven and eight completed the good qualifying result for Audi.

“Six Audi A4 DTM cars among the top eight are an extremely strong team performance and a good starting base for the race,” said Head of Audi Motorsport Dr. Wolfgang Ullrich. “I’m particularly happy for Martin (Tomczyk), who delivered a sensational lap showing how strong he is and how much he likes the Nürburgring.”

Mike Rockenfeller, Alexandre Prémat and Katherine Legge will start to the race from positions nine, twelve and 14. Prémat’s qualifying was handicapped by his engine misfiring which resulted in the engine electronics and the shifting force sensor being exchanged. Katherine Legge owed the fact that she made it into the second qualifying segment (Q2) to her mechanics who managed to repair her Audi A4 DTM after an accident in free practice in time for qualifying.