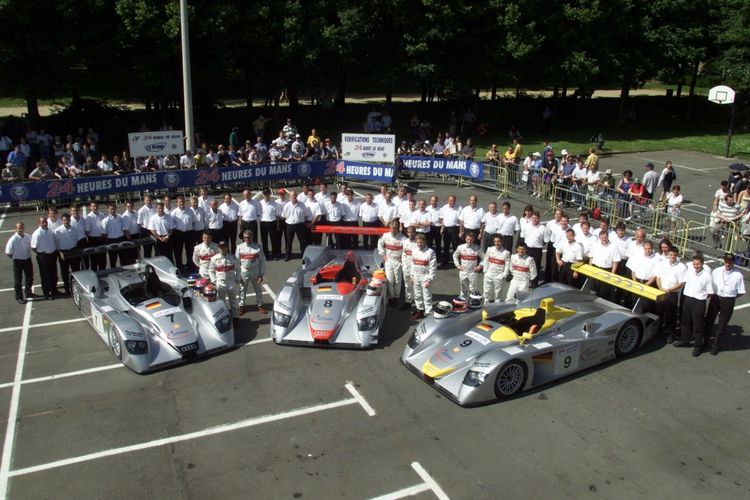 A good start for Audi Sport Team Joest at the Le Mans 24 Hours. The three Audi R8s are placed first, second and third fastest after the opening qualifying session held in warm, dry conditions this evening.

Not only were the Audi R8s able to achieve their fast times around the 8.45-mile road circuit, despite a “dirty” surface making conditions slippery at the beginning, but the team were delighted to find that detailed work made since the pre-test in April had worked.

“All of our drivers and our technical staff around the circuit reported the same story: that the car was smooth and stable and we´d made a big step forward since we were here at the pre-test,” confirmed Audi´s Head of Sport, Dr Wolfgang Ullrich.

The best time of the evening was set by Audi R8 no.7 by Rinaldo Capello who claimed provisional pole-position as dusk approached with a time of 3mins 37.523secs. Frank Biela
(Audi R8 no.8) and Allan McNish (Audi R8 no.9) were only 72 and 130 thousands of a second slower.

But first qualifying was not completely trouble-free for Audi Sport Team Joest. The no.8 Audi R8 suffered a rear puncture with Emanuele Pirro at the wheel. Christian Abt (no.7) had to stop his Audi R8 after three hours because of an engine failure.

Christian Abt (no.7): “This is a dream car and our team works perfectly together. Everybody knows exactly what to do. That´s how work is real fun.”

Michele Alboreto (no.7): “That was a great first day at Le Mans. The car feels very good, the great development since last year´s race is paying rewards.”

Rinaldo Capello (no.7): “Especially at the beginning the track was very dirty because of other cars going off the track. About my quickest time: I think I´ve never had such a free lap at Le Mans before.“

Frank Biela (no.8): “I´m very satisfied. We were able to complete our programme. At the end of the session I did a long-run during which I even set my fastest lap. “

Tom Kristensen (no.8): “I was out having my first stints this year because I was not at the preliminary test. When I went out it was getting dark already but I felt like home from the first moment on.“

Emanuele Pirro (no.8): “I´m quite happy with the car and our performance here at Le Mans. I did my fastest laps on race tyres so there is clearly more potential for the second qualifying.“

Laurent Aiello (no.9): “I could not find a perfect lap. I always had to slow down or even brake. We have to sort out some things at the car. But on the first day at Le Mans this is very normal.”

Allan McNish (no.9): “I´m sure we will be faster tomorrow. Because we didn´t use qualifying tyres today. Generally the track is not as fast as last year. But I don´t know yet why that is.“

Stéphane Ortelli (no.9): “I did my fastest laps in the darkness. We are getting better from lap to lap because experience is growing and we are getting more used to the track. The car is very easy to drive. I guess the Audi R8 is the best car I´ve ever driven at Le Mans so far.”

Dr. Wolfgang Ullrich, Head of Audi Sport: “Our cars are very close together at the front. All three teams found their best setup very quickly. We could also drive fast times during the night so the light is working alright. But we also recognised that within two minutes problems can occur which were not expected: Emanuele Pirro had a tyre puncture at the fastest part of the track after driving over a debris. Two minutes later Christian Abt suffered a problem with the engine which we have not identified yet.”

Reinhold Joest, Team Director Audi Sport Team Joest: “Despite of the engine problem with car number 7 which we will have sorted out before second qualifying everything worked out fine. The times fit, all three cars are leading, I simply have to be satisfied.”