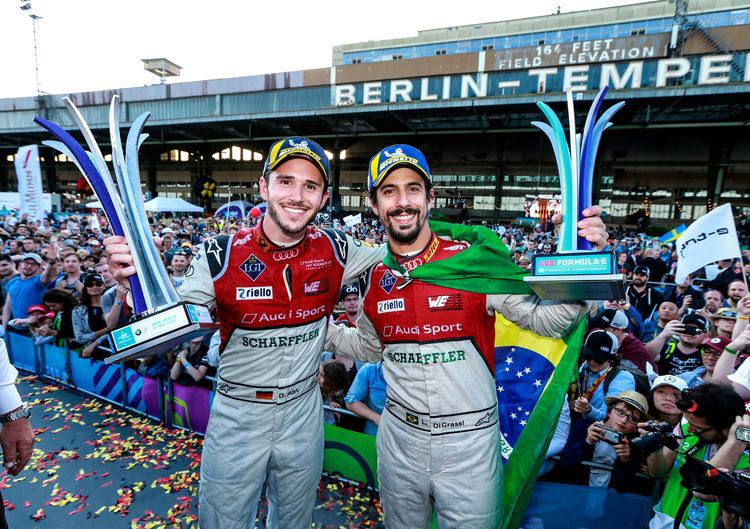 Audi electrified Berlin with a fairytale finish at the Formula E home race. Thanks to pole position, a dominant one-two finish and the fastest race lap, Audi Sport ABT Schaeffler is the first team to score maximum points on a race day of the electric racing series.

The beaming and enthusiastically celebrated winner by the Berlin public was called Daniel Abt. The 25-year old German produced a perfect performance at his home race. Despite having to qualify in the unfavored first group, Abt qualified effortlessly for the single timed lap for the fastest five, where he threw down the gauntlet and easily clinched the first three points for the second pole position of his Formula E career. This was followed by a dominant start-finish victory and as crowning glory the point for the fastest race lap.

“That was probably the most important win of my career so far and an incredible day from beginning to end,” said Daniel Abt, after having been presented with the winner’s trophy from Transport Minister Andreas Scheuer. “Maximum points with pole position, victory and the fastest lap and then on top of this a one-two for Audi – my thanks go to everybody who supported us. Today there will be a party like never before!”

The Audi one-two finish in the home race in Berlin was made perfect by Lucas di Grassi. The defending Champion set the fastest lap in qualifying with his Audi e-tron FE04, but then had a short slide that dropped him down to fifth on the grid. After the start, the Brazilian needed only twelve laps to move his way up to second place. Thanks to a faster pit stop, the Brazilian caught up with his team mate and subsequently drove effortlessly home in second place. The third placed Jean-Eric Vergne in Techeetah was already more than twelve seconds behind at the checkered flag.

“First of all congratulations to Daniel who really deserved to win today,” said di Grassi after his fourth consecutive podium result. “Our Audi was super fast today and superior to the competition, so we only actually had to fight between ourselves for the victory. After the pit stop I was right behind Daniel, but I had a problem with my second car that we have to analyze. A dream came true with this one-two for Audi. After the year started so badly for us we are now second in the teams’ championship.”

In the drivers’ championship, both Daniel Abt and Lucas di Grassi improved before the last three races in Zürich (June 10) and New York (July 14/15) to take fourth and sixth places respectively. Abt is only one point shy of third place in the standings.

“It was a fantastic race for us,” said Head of Audi Motorsport Dieter Gass. “The first one-two for Audi since the Formula E factory program started and the first ever for the team – and all this in the home race! Daniel achieved the maximum possible and Lucas made the day perfect for us. My congratulations go to everybody who has worked so hard for this. It’s very rare that you see such a big advantage in a Formula E race.”

“A one-two for Audi in Berlin is just unbelievable,” said Team Principal Allan McNish. “A clean sweep on home soil, a day just can’t be better than this Saturday in Tempelhof. I’m incredibly proud of the entire team!”