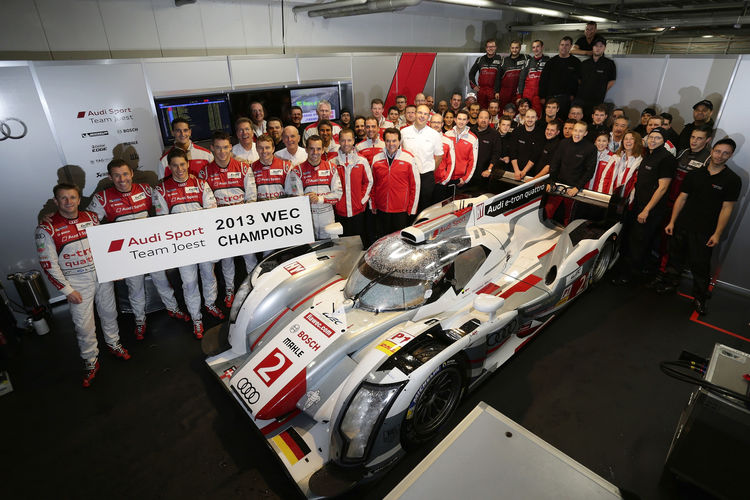 Audi has defended its titles early in the FIA World Endurance Championship (WEC) in Japan. The success with the R18 e-tron quattro was achieved by Audi Sport Team Joest in odd circumstances: Heavy rain at Fuji meant that not a single lap could be completed under the Green Flag. In the end, the leaders of the standings, Loïc Duval/Tom Kristensen/Allan McNish (F/DK/GB), as the best Audi team took second place overall in the race, their team-mates Marcel Fässler/André Lotterer/Benoît Tréluyer (CH/D/F) were classified in fourth place in the LMP1 category. Consequently, the drivers’ classification will be decided between the two Audi squads at the remaining rounds.

At the sixth of eight WEC rounds, difficult weather conditions prevailed. Steady rain had prompted race control to start the endurance race behind the safety car. But the 4.563-kilometer track at the foot of Mount Fuji was too wet for the race to be released in these conditions, so the stewards of the meeting interrupted the race after eight laps. A resumption behind the safety car after two and a half hours ended in another interruption 22 minutes later. Another two hours later, the participants again started behind the safety car before the race was finally stopped after just one lap. The stewards decided that force majeure had prevented a regular course of the race. As a result, the drivers, due to the shorter race distance, were awarded half the points equating to their positions – even if they had not been in the cockpit at all. With two remaining rounds, Audi is out of reach in the manufacturers’ World Championship with a 66.5-point advantage.

As the best Audi squad in the race, the leaders of the standings, Loïc Duval/Tom Kristensen/Allan McNish, who had started from position four, achieved second place. They extended their lead in the Championship to 40.75 points. Among other things, the Audi designated as car number ‘2’ benefited from the fact that the number ‘8’ Toyota, which had qualified in position two, could not assume its place on the grid. As a result, the car had to start from the pit lane and was unable to overtake under safety car conditions.

The number ‘1’ Audi suffered misfortune. André Lotterer/Marcel Fässler/Benoît Tréluyer initially led the race from position one on the grid. When debris impaired the intake duct of the engine Audi Sport Team Joest decided to perform a repair for safety reasons. The team used a second caution period to do so when there were prospects for a weather improvement and thus a resumption of the race. However, since this did not occur and the rain became heavier again, last year’s World Champions had to settle for fourth place in their class and 26th place overall. For the first time in almost exactly one year, the Audi LMP sports cars thus had to formally admit defeat. At Shanghai, the next WEC round will be on the agenda in three weeks from now. There, Audi could have another reason to celebrate, as an early title decision in the drivers’ classification is probable in China.

Dr. Wolfgang Ullrich (Head of Audi Motorsport): “We’d very much have liked to offer a great race to the many enthusiastic Japanese fans. Unfortunately, the weather today prevented this. Nobody can be blamed for this. And that the race was ultimately stopped was the only reasonable decision – safety always takes top priority. We’re happy about the World Championship title even though we’d have liked to have clinched it under different circumstances. I’m sure that the Japanese fans can look forward to a great sports car race at Fuji next year.”

Chris Reinke (Head of LMP): “We deserve to have won the World Championship title because we’ve been showing very good performances throughout the season. For Fuji we’d been planning a different outcome but the weather got in our way. It was a very unusual race. The squad can be proud of having defended the World Champion’s title.”

Ralf Jüttner (Technical Director Audi Sport Team Joest): “We’ve become World Champions but there’s no sheer joy after this race today. Unfortunately, we didn’t drive a single lap under green flags. Naturally, we’d have liked to have pitted ourselves against our opponent in a genuine competition but there was no chance of doing that today. Although points were awarded it subjectively feels as if we hadn’t driven a race at all.”

Loïc Duval (Audi R18 e-tron quattro #2): “I’ve often driven in Japan. There have been a lot of races that were canceled in such weather conditions. Our cars are not drivable in such heavy rain. It’s as though you were in a boat. Of course we’re racers and want to drive in front of our fans but this was the right decision today by race control.”

Tom Kristensen (Audi R18 e-tron quattro #2): “I’ve driven many races before at Fuji. It’s always been one of the most difficult race tracks in rain. The clouds hang in the mountains for a long time, there’s fog and poor visibility. The layout of the track with hilltops and peaks and valleys, that we love very much, causes many water streams. This means you’ve got a lot aquaplaning. I didn’t even sit in the cockpit. Loïc Duval and other drivers reported that our cars are simply not drivable here.”

Allan McNish (Audi R18 e-tron quattro #2): “In this heavy rain, it was the right thing to start behind the safety car and to stop the race. Our cars are designed for driving in dry conditions. Obviously, it’s a shame for the fans who had turned out here to watch the duel between Audi and Toyota. But even if we had driven, there wouldn’t have been many cars left after a few laps.”

Marcel Fässler (Audi R18 e-tron quattro #1): “When you see how much water is pouring down it was no doubt the right decision. Obviously the spectators who remained in the grandstands and wanted to see the race are the ones who lost out. But it doesn’t do anybody any good because the aquaplaning makes for critical situations. I can understand that the race was stopped.”

André Lotterer (Audi R18 e-tron quattro #1): “We’re all sorry but there was too much water on the track. We floated in our cars instead of driving them. There’s simply nothing you can do. Neither our cars nor the tires have been designed for such conditions. In addition, we suffered a bit of misfortune today but such weekends exist as well.”

Benoît Tréluyer (Audi R18 e-tron quattro #1): “It’s difficult to make such a decision. But it was no doubt the right choice because the track at Fuji is extremely dangerous in heavy rain. It’s better to stop the competition than to risk accidents. There have been too many serious accidents in various racing disciplines this season. That’s why the decision was right.”