Audi e-tron FE06 meets with rivals for the first time 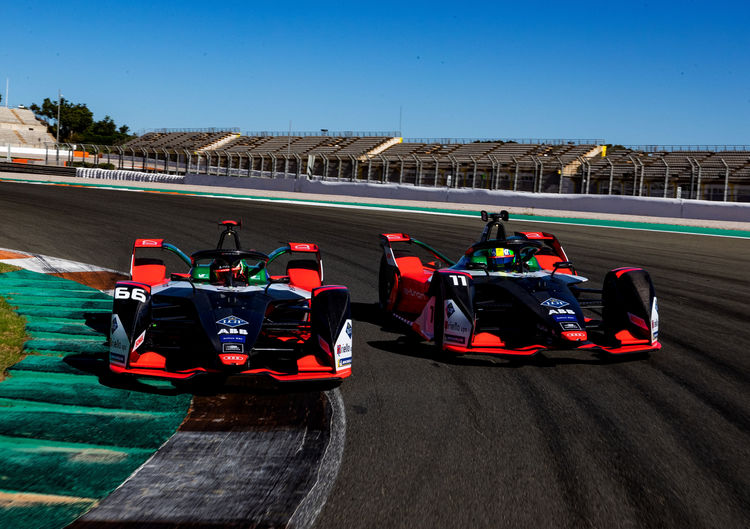 At Valencia, the new Audi e-tron FE06 is meeting with its competitors for the first time this week: until Friday, all twelve teams will continue the joint test, before the new season kicks off in Diriyah (Saudi Arabia) on November 22 and 23.

Formula E’s summer break is finally over: This week, Daniel Abt and Lucas di Grassi are testing together with the other teams and drivers for the first and only time before the season begins. During the pre-season test, the pairing also shows its #11 (di Grassi) and #66 (Abt) Audi e-tron FE06 race cars sporting their final liveries for the first time. As an additional distinguishing feature, the German has received neon-orange rear-view mirrors.

With twelve teams, 24 drivers and a total of ten manufacturers – including the four German premium brands Audi, BMW, Porsche and Mercedes – fans can expect to see what will arguably be the most thrilling season of all time. As a founding member of Formula E, Audi Sport ABT Schaeffler takes on its old and new competitors with a proven team: Daniel Abt and Lucas di Grassi are the only pairing to have jointly contested all of the Formula E races so far in the same team and are jointly entering the sixth season. “This consistency and the cooperation within our well-gelled squad are our great strengths in such a dynamic and vibrant championship as Formula E,” says Team Principal Allan McNish.

In addition to the action on the race track on Tuesday, Wednesday and Friday this week, Abt and di Grassi have a busy schedule on Thursday: during the Media Day, all of the official photographs and videos will be shot in which the drivers will subsequently be featured on posters, on Formula E’s social media channels and during television broadcasts.

Following the pre-season test at Valencia and the conclusion of the preparations, the two Audi e-tron FE06 cars and all of the equipment will be made ready for shipping. Initial clarity about the real relative strengths of the teams will be provided at the season opener in Diriyah (Saudi Arabia), where on November 22 and 23 the first two races will be held, before Formula E embarks on its world tour with twelve more races being held on five continents until the end of July 2020.