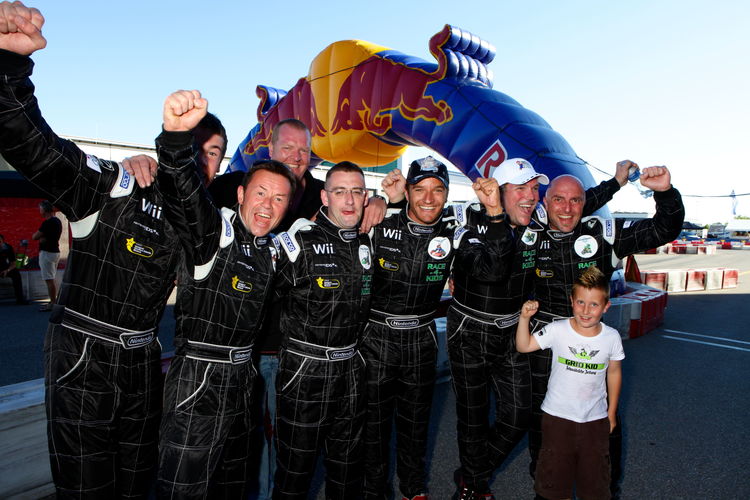 From the Rhineland Evening with delicious specialties from Cologne all the way to a parade of 24 Audi A5 Coupé cars – the spectators at the DTM race at the Nürburgring (August 6 to 8) will get to see a lot from Audi above and beyond racing.

One week before their round at the Nürburgring Timo Scheider and Oliver Jarvis contested a celebrity kart race for a charitable purpose. Scheider with his Nintendo team won the “Race-4-Kids” in Friedrichshafen, the proceeds of which go to the “Stunde des Herzens” (“Hour of the Heart”) foundation, in front of 21 other teams. Among the visitors at the event, during which Timo Scheider also did a demo drive with the Audi A4 DTM, was team director Hans-Jürgen Abt.

Markus Winkelhock was engaged in a charitable activity as well, performing the part of an “Angel in Action.” For the German TV show “Engel im Einsatz” hosted by Verona Pooth the Swabian visited a family in Simmern in the Hunsrück region, whose home had been severely damaged by flooding. During his mission the Audi “factory” driver spontaneously invited the victims to the Nürburgring.

“Kom loss mer fieere op kölsche Art” (“Let’s celebrate the way they do in Cologne”) – quattro GmbH chose this colloquial motto for the Rhineland Evening which the company traditionally hosts at the Nürburging. Starting at 7 p.m. on Friday original culinary specialties from Cologne, accompanied by music, will be served at quattro GmbH’s sales booth in the paddock.

On Sunday, spectators will experience an entire parade of the Audi A5 Coupé on the track shortly before the race: two dozen Coupé cars, which Audi Sales, Germany, will be handing over to dealerships, will complete a lap around the Grand Prix circuit in the Eifel during the “Audi Drive Away” at 12:15.

At the press conference held before the DTM race at the Nürburgring Mike Rockenfeller proved his fitness. On Tuesday, the Audi “factory” driver underwent a differential power diagnostics program on a bench at the Sporthochschule Köln (Cologne Sport University) under the supervision of Dr. Heinz Kleinöder, Head of the Department for Power Diagnostics and Motion Research. In addition, the DTM professional tested a vest for electrical stimulation and proved his sense of balance on a Posturomed platform.

Alexandre Prémat took advantage of the DTM summer break to marry his partner of many years, Cléo. The wedding bells rang for the couple on July 24.

Fans at the Nürburgring can look forward to a veritable feast for the eyes and a spectacular show on Saturday night: after the “Meet the Media” event at 9 p.m. the Audi “factory” drivers will be piloting nine RC model race cars directly in front of the Audi Team & Media Hospitality. Each of the Audi A4 models, which are furnished by the Model Car Club Adenau, has been painted according to the color schemes of the original Audi DTM race cars. Guest entrants may try out the 1:10-scale touring cars on the club’s new indoor race track in Leimbach near Adenau as well.

The Audi drivers are not the only ones who are fascinated by RC cars. Jörg Baldes, the data engineer for Mike Rockenfeller’s car with Audi Sport Team Phoenix, contested the world championship for 1:10-scale remote-controlled touring cars with internal combustion engines from July 22 to August 1. In the field of 122 entrants from 25 nations the technician finished 44th overall in his model race car with a top speed of about 100 km/h at the Gulf Coast Raceway in the U.S. state of Texas, which made the former German champion the fifth-best of the ten German entrants.