{{ activeItem() }}
Twitter
05/17/21
MEDIACENTER: Audi Sport mourns the death of Volker Nossek &gt;&gt; https://t.co/G9K5N5aOUY #PerformanceIsAnAttitude #DTM https://t.co/zyZH1bitxy
05/17/21
MEDIAINFO: Audi Sport customer racing newsletter: Audi R8 LMS GT2 celebrates second double victory &gt;&gt;… https://t.co/NCaBNZQOB3
05/16/21
Audi Sport driver @vanthoordries1 qualified third for the second ADAC @GTMasters race of the weekend at… https://t.co/uyfSTHN1Me
05/15/21
Podium at @MotorspArenaOC: Audi Sport driver @MiesChris and teammate Ricardo Feller finished third in today’s ADAC… https://t.co/fBO8WEE5DK
Audi Sport on Twitter
{{ activeItem() }}
Facebook
05/13/21
Looking back on the next chapter of our history at the ADAC TOTAL 24h-Rennen Nürburgring. Together with Christopher Haase - Fanpage, join us as we relive the race in 2014, which resulted in a faultless victory and a new race distance record. #PerformanceIsAnAttitude #24hNBR
05/10/21
Victories for the Audi R8 LMS in Europe and Australia were just some of the highlights for our customers worldwide during the most recent race weekend. Well done to all! 🇫🇷 🇦🇺 🇸🇰 🇩🇪 🇳🇴 🇳🇿 🇨🇳 🇧🇷 🇧🇪 🇮🇹 >> audi.com/GT3 >> audi.com/GT4 >> audi.com/TCR #PerformanceIsAnAttitude
05/08/21
From the back and into the points for Lucas Di Grassi in Monaco: Lucas moved forward from 17th to score a point in 10th, while René Rast’s kiss with the wall unfortunately ended his race. Up next: Puebla in Mexico from June 19–20. >> audi.com/FormulaE #FutureIsAnAttitude #MonacoEPrix
05/08/21
RACE DAY in Monaco, the first time that ABB Formula E is running on the full-length circuit. Don’t miss today’s Monaco E-Prix at 16:04 CEST. >> audi.com/FormulaE #FutureIsAnAttitude #MonacoEPrix
Audi Sport on Facebook 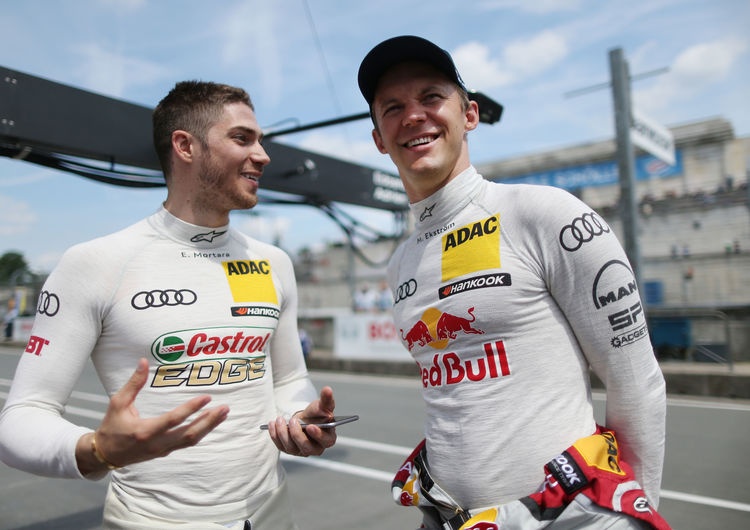 The Audi drivers Edoardo Mortara (Italy) and Mattias Ekström (Sweden) have promised the DTM fans to leave no stone unturned in the finale at Hockenheim next weekend to make the title race as thrilling as possible.

The two drivers from Audi Sport Team Abt Sportsline are entering the last two races of the year, in which a total of 50 points are yet to be awarded, with a deficit of 37 and 38 points, respectively, to Mercedes driver Pascal Wehrlein. “Obviously, it’s going to be very difficult for us and we have to hope that Wehrlein will be encountering problems. But in motorsport, anything’s possible,” Mortara said on Wednesday during an Audi telephone press conference. “As long as we’ve still got a chance, we’re going to battle. It’s clear that Mattias or I will have to win the first round on Saturday to keep the title race open.”

His teammate Mattias Ekström, who managed to secure the second DTM title in his career in the last race at Hockenheim in 2007, views the situation in a similar vein. “Under my own power, I won’t be able to become Champion anymore this time because two victories alone won’t be enough for me,” says the Swede. “Our opponent will no doubt have to be struck by two bad days. But it doesn’t take much to score zero points twice in the DTM. I know this from past experience and it can easily happen to others too. For the sake of entertainment, it would be good if Edo and I took first and second place on Saturday to make up a large number of points. In that case, the fans would get to see a tremendous battle for the Championship on Sunday.”

In the manufacturers’ and the teams’ classifications, the decisions in the 2015 DTM are still pending as well. ARD will air live coverage of the two final races from Hockenheim: on Saturday starting at 13.00 and on Sunday starting at 15.00 CEST.