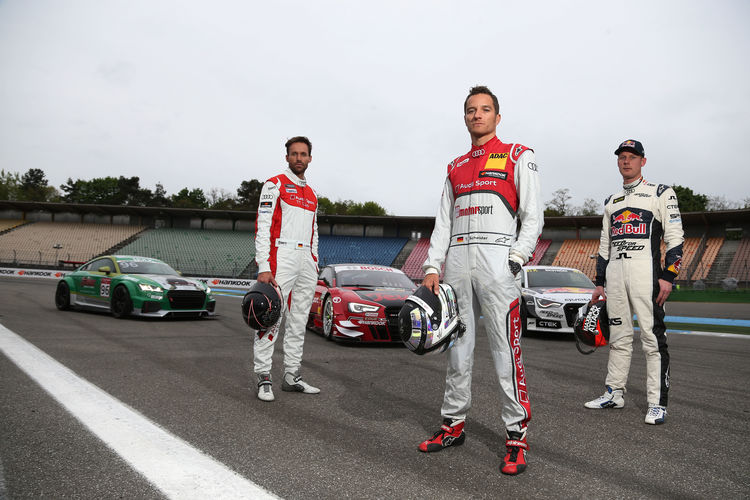 Season opener of the DTM, world premiere of the Audi Sport TT Cup, plus ‘World Rallycross Championship meets circuit racing’ – the Hockenheimring will be the venue of a motorsport festival this weekend. In the middle of the action: Audi drivers such as Timo Scheider, Sven Hannawald and Edward Sandström. All of them agree: “This is going to be a huge spectacle for the fans.”

“Starting the season with such a highlight after a long winter break is awesome,” the two-time DTM Champion Timo Scheider raves about the event in a conversation with his fellow race drivers Hannawald (Audi Sport TT Cup) and Sandström (World RX). And, with his eyes wandering toward the three race cars parked in the background, he adds: “That Audi is the only manufacturer represented in three different racing series here shows the intensity of the brand’s motorsport spirit.”

Obviously, the main act this weekend is the eagerly awaited DTM season opener that will see Scheider contest his 150th race on Saturday (live on ‘Das Erste’ starting at 14.30, local time) – followed by the next one on Sunday. But the new Audi Sport TT Cup, also featuring two races, plus the FIA World Rallycross Championship will be attracting additional fans to Hockenheim as well.

Ski jump legend Sven Hannawald is part of the Audi motorsport family that combines various series this weekend. The 40-year-old is involved in the on-track action during the world premiere of the Audi Sport TT Cup. “This is a great opportunity to get rid of some bottled-up adrenaline,” says Hannawald, looking forward to the two races. “The racing version of the TT is perfect for an outing following a longer break from racing. I could even imagine taking up a larger commitment in the cup.” But the former Olympic gold medalist and world champion would not be opposed to a stint in the Audi S1 EKS RX quattro of rallycross racer Edward Sandström either. “I’ve never driven a car like this but if Edward invited me to try it, I wouldn’t say no.” DTM star Timo Scheider already had this unique experience last winter. “It was sensational fun,” he says.

Edward Sandström can only confirm this. At Hockenheim, the Swede takes over driving duties in the Audi S1 EKS RX quattro of Mattias Ekström, who is fully concentrating on the DTM season opener this weekend. “The chance to present ourselves to such a large motorsport audience at Hockenheim is a fantastic opportunity for the World Rallycross Championship to win new fans,” says Edward. “We’re going to give our all to deliver a tremendous show.” Sandström is the only driver in the paddock to be  involved in all three series: as a racer in the World Rallycross Championship, as a driver of one of the two Audi RS 5 DTM race taxis in the DTM and as coach of his Swedish compatriot Anton Marklund in the Audi Sport TT Cup.