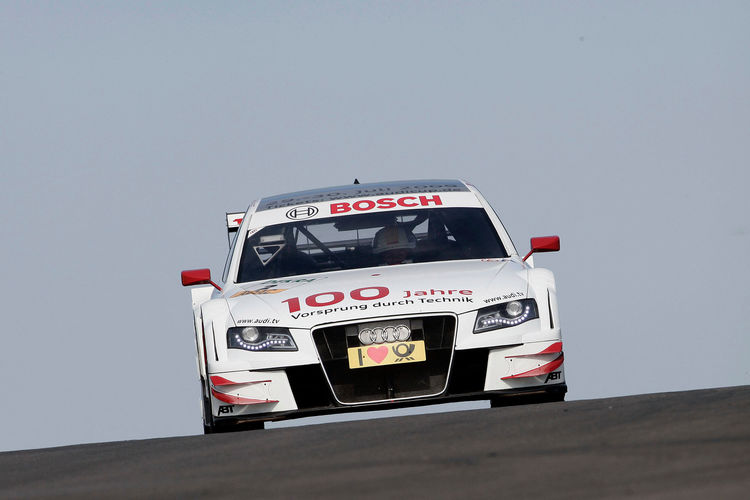 Only two weeks after the Dutch DTM round in the dunes of Zandvoort the most popular international touring car racing series returns to Germany – or putting it more precisely, to East Germany: The Motorsport Arena Oschersleben will play host to the fifth round of the 2009 DTM season on August 2.

Almost all Audi drivers have particularly fond memories of the circuit situated in the “Börde” flatlands near Magdeburg – especially Tom Kristensen, who contested four DTM races at Oschersleben, starting to each one from the front row and finishing twice at the very top of the podium. Similar to his nickname “Mister Le Mans,” the eight-time Le Mans winner is often called “King of Oschersleben” by fans.

Mattias Ekström is another driver who enjoys returning to Oschersleben again and again – although the Motorsport Arena is one of the circuits on which the two-time DTM Champion has not yet clinched victory. Nevertheless, the Swede has a positive Oschersleben track record: The Audi driver has started there six times so far, and each time he finished in the points.

For Timo Scheider, Oschersleben evokes very special feelings: The reigning champion celebrated his long awaited first victory at a DTM race in the Magdeburg flatlands last year. The win made him take the lead of the standings which he successfully defended up to the finale at Hockenheim.

Martin Tomczyk has good memories of the Motorsport Arena as well: As many as two times the Bavarian started from the front row there. In 2004 and 2008 he completed one-two wins for Audi by finishing both races as the runner-up.

But not only the drivers of the current Audi A4 DTM cars enjoy returning to this circuit – in 2007, Mike Rockenfeller in a year-old car sensationally started to what was just his second DTM race from the front row and in the race secured third place after a captivating duel with Mika Häkkinen. Last year, Oliver Jarvis shone with grid position four – also achieved at his DTM run. Markus Winkelhock took his first DTM points in 2008 at Oschersleben; Alexandre Prémat just barely missed scoring points after a strong race.

Katherine Legge is particularly taken with the circuit at the Motorsport Arena. And she is at the wheel of the Audi A4 DTM in which Timo Scheider won at Oschersleben last year. It was the third Oschersleben exploit for the brand with the four rings since its comeback as a manufacturer in the 2004 season.

To ensure that nothing is left to chance, Mattias Ekström and Timo Scheider tested at Misano, Italy, between the races at Zandvoort and Oschersleben because the first four rounds of the 2009 season have shown that the DTM field is even more competitive this year than it was last year. To the spectators’ delight, predictions are nearly impossible.

Quotes before the DTM race at Oschersleben

Dr. Wolfgang Ullrich (Head of Audi Motorsport): “I hope that the feathers ruffled after the race at Zandvoort will have smoothed again before Oschersleben. I’m convinced that the spectators will again get to see an exciting race because experience has shown that the time gaps at Oschersleben are particularly close. I think that every one of our nine ‘factory’ drivers has a chance of finishing on the podium. The 50th victory of an Audi in the DTM continues to be our goal. But despite our positive Oschersleben track record we will not underestimate our rivals. Mercedes was unexpectedly strong most recently at Zandvoort – primarily Gary Paffett of course.”

Mattias Ekström (Red Bull Audi A4 DTM #5): “I like driving at Oschersleben. Compared to the competition, we will have a weight advantage. And the circuit suits our car. Although I was always fast on this track I’ve never clinched victory there. I’ll give all I’ve got to finally win this year.”

Timo Scheider (GW:plus/Top Service Audi A4 DTM #1): “I took my first victory in the DTM at Oschersleben. That’s why I’ll always have special memories of this circuit. I’m well aware of the dominance which Audi and I demonstrated there last year. We dominated all the practice sessions, qualifying, the warm-up and the race there. This means that we definitely made a special mark. In addition, we have a little weight advantage this year. That’s why I’m going to Oschersleben with a pretty good feeling.”

Tom Kristensen (100 Jahre Audi – A4 DTM #2): “I’m very much looking forward to Oschersleben and hope that we’ll be able to continue our traditionally good showings there. It’s the only circuit on the DTM calendar on which I’ve won as many as two times. The track is great and I’m hoping that it’ll also suit our 2009-spec model. Still, it’ll be a very closely fought race which will hopefully produce a victory for Audi.”

Oliver Jarvis (Audi Cup A4 DTM #15): “At Oschersleben I drove my best qualifying of the season last year. Unfortunately, I collided in the race with Jamie Green, who hit the rear of my car and turned me around. Nevertheless, I’m looking forward to going back there. I’m hoping for us to be fast again, being able to score additional points and achieving further improvement in the championship.”

Martin Tomczyk (Red Bull Cola Audi A4 DTM #6): “Oschersleben will probably be good. This year, however, Mercedes is difficult to judge because at Zandvoort they were running well across the entire racing distance despite their higher weight. But Oschersleben should actually be a good track for us.”

Markus Winkelhock (Playboy Audi A4 DTM #12): “I’ve got fond memories of Oschersleben, where I scored my first DTM points last year and also took my very first Formula 3 pole in the past. It’s a circuit that suits me well, even though its characteristics are not necessarily favorites of mine. I prefer driving on fast and fluid tracks. But I always managed handling Oschersleben well and am hoping that things will continue going well.”

Mike Rockenfeller (S line Audi A4 DTM #11): “In the past two years Oschersleben was a good track for my team and me. The circuit suits me, and it should be suiting the car as well. That’s why I’m optimistic about clinching another good result after the disappointing outcome at Zandvoort. I want to again convert a good qualifying into a good race result.”

Katherine Legge (Audi Collection A4 DTM #21): “I really like the circuit at Oschersleben – and my car was very good there last year.”

Alexandre Prémat (Audi Bank A4 DTM #14): “Oschersleben is a nice circuit on which I’ve experienced good tests and races. It’s very demanding from a physical point of view. My goal is clear: I want to score points. The cars Oliver (Jarvis) and I drive are capable of that. We’ll try and clinch the best result for Phoenix and Audi.”

Hans-Jürgen Abt (Team Director Audi Sport Team Abt Sportsline): “We’re all looking forward to Oschersleben. The circuit really suits us well and we’ve got a small advantage as far as additional weight goes. In the point standings we’re close to the leader, Gary Paffett. I’m hoping for a thrilling race.”

Ernst Moser (Team Director Audi Sport Team Phoenix): “The performances at Zandvoort are a great base to build on, even though in the end the result was not what we’d been looking for after the first laps of the race. If we go into qualifying with the same level of concentration we showed at Zandvoort and start as far at the front again, quite a bit will be possible at Oschersleben.”

Arno Zensen (Team Director Audi Sport Team Rosberg): “Of course I’ve got fond memories of Oschersleben because two years ago we were on the front row of the grid here with ‘Rocky’ and finished on the podium. Oschersleben suits our car, so I’m optimistic that we’ll take the momentum from Zandvoort with us. I also have memories of a good GT race with the Audi R8 LMS when we mounted the podium. It would definitely be great to be able to repeat that in the DTM.”

Audi clinched its 50th pole position in a DTM race at Zandvoort. At Oschersleben, Audi has the chance to celebrate its 50th victory in the DTM ... At each of the last six DTM races an Audi was sitting on the pole position ... In 2002 and 2003 no DTM races were held at Oschersleben, since 2004 the circuit in the Magdeburg “Börde” flatlands has been a firm element on the DTM calendar ... In 2005 the “super pole” qualifying of the top ten had to be cancelled due to a storm ... Tom Kristensen managed a “hat-trick” at Oschersleben in 2006: the pole position, fastest lap and victory ... In 2007 Alexandre Prémat and Tom Kristensen were not able to start at Oschersleben after an accident in the season opener at Hockenheim ... As usual, ARD will broadcast qualifying and the race live on “Das Erste.”

Tom Kristensen about the circuit at Oschersleben: “Oschersleben is a fluid track with some fast turns and many directional changes throughout. I like the circuit. Achieving good lap times requires highly spirited driving there. You’ve got to aggressively enter the slow turns in particular and exit them with a lot of momentum. In addition, the circuit is very tight. This means there is no room for mistakes. A good vehicle set-up is particularly important at Oschersleben. The tarmac generally has relatively low grip, but grip increases with each lap. In rain the track is very slippery – particularly in the first turn. The triple left-hander, which is truly a challenge on each lap, is the most interesting place.”


The schedule at Oschersleben