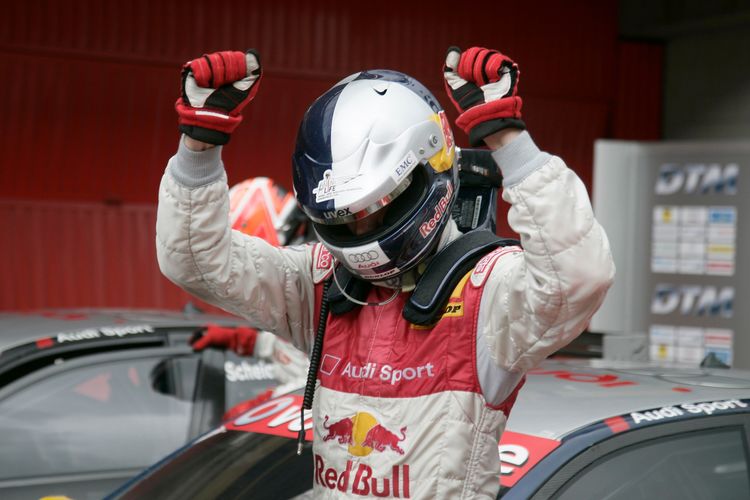 With a superior qualifying performance in the rain for the DTM race at Barcelona (Spain) Audi driver Martin Tomczyk underpinned his ambitions for the DTM title. Like last year, the 25-year-old German secured the pole position for Audi at the Circuit de Catalunya in a commanding drive.

After five Audi A4 DTM cars had made it into the top six in the morning’s Free Practice, rain that set in before the qualifying completely changed the conditions, which Martin Tomczyk handled best: From the very beginning, the Audi driver set the pace, at times being almost a second faster than anyone else on the slippery track. In the end, he secured the sixth pole position in his DTM career with a 0.179-second lead over two-time Formula 1 World Champion Mika Häkkinen.

The joy of Audi Sport Team Abt Sportsline’s fourth consecutive pole position (Mugello, Zandvoort, Nürburgring and Barcelona) was contrasted by the disappointment over the results achieved by the other Audi drivers: Besides Tomczyk, only Timo Scheider managed to make it into the last qualifying segment. The German claimed seventh place.

Leader of the standings Mattias Ekström for the second time in a row had to settle for tenth place on the grid.

Barcelona could bring an early decision in the fight for the DTM title on Sunday: If the contenders finish the race in the same order as the qualifying practice, Audi would be sure of the title.

Considering the grid positions, however, the squad is still in for some hard work. 58 race laps are on the agenda on Sunday. ARD will broadcast live from Spain on “Das Erste” starting at 1:45 p.m. (local time).

Dr Wolfgang Ullrich (Head of Audi Motorsport): “I’m very happy for Martin (Tomczyk), who drove a superb qualifying. Everything fit perfectly together, he didn’t make the slightest mistake, and the timing was perfect as well. Unfortunately, he was the only to manage this. With the others, things didn’t work out as well as we’d been hoping. But in changing conditions simply every details has to fit – Martin and his team were the only ones to get this right.”

Martin Tomczyk (Red Bull Audi A4 DTM #4)
1st place, 1m 18.689s
“It was pretty strenuous, but I’m incredibly happy. The track kept getting dryer, which didn’t make things any easier with regard to the tyres and air pressure. Nevertheless, we got everything right. In the last session, the situation was hairy. We were only able to set the times in the beginning, then the tyres got too warm and the air pressure rose too much. In such conditions, you also need a bit of luck, as we were able to see with the other Audi drivers.”

Timo Scheider (Gebrauchtwagen:plus/Top Service Audi A4 DTM #8)
7th place, 1m 19.766s
“The beginning was pretty good. In the heavy rain the car wasn’t bad at all. For the second session, we changed a few things and that it made it very difficult. So we changed back again to the first variant. That was obviously the wrong decision. The main problem was that the rear axle was performing very poorly in the last third of the qualifying. A better result would have been possible with the car. Congratulations to Martin (Tomczyk). He showed a great performance. Tomorrow I want to make up ground as quickly as possible.”

Mike Rockenfeller (S line Audi A4 DTM #11)
9th place, 1m 19.685s
“Ninth place and barely missing the top eight: too bad! But in these conditions it’s really difficult to manage a good lap at the right time. The track was getting drier and drier. That doesn’t necessarily mean that you get faster and faster yourself, because it’s very slippery out there and the tyre pressure rises heavily. In the end we didn’t have the perfect tyre pressure. Nevertheless, by securing ninth place I made the best of the situation. It would have been great to be in the top eight. But this is still a good starting base for tomorrow.”

Mattias Ekström (Red Bull Audi A4 DTM #3)
10th place, 1m 19.744s
“That’s not what we were shooting for, tenth place – the same result as at the Nürburgring. Any more than this wasn’t possible with my set-up in these conditions. This means hard work on Sunday. At the Nürburgring we managed to move to the front of the field, we want to achieve this again tomorrow.”

Tom Kristensen (Siemens Audi A4 DTM #7)
11th place, 1m 20.164s
“I was very satisfied with the car in the morning when it was dry, as my second place in Free Practice shows. The shower came at the wrong time for me. In the rain I started having problems with the drive axle because I had oversteer and little traction in all my trials – that wasn’t a very good qualifying. It’ll be a tough race.”

Christian Abt (Playboy Audi A4 DTM #16)
13th place, 1m 20.251s
“I think we did everything right. But the tyre sets are very different. That causes the car to completely lose balance. They’ve got to work on improving that – if you’re lucky you end up all the way in front, if not, you end up at the rear. I don’t think there’s anyone here in the field who’s lost their ability to drive.”

Markus Winkelhock (Audi A4 DTM #20)
15th place, 1m 20.306s
“Because rain suits me pretty well, I’d hoped for a better result and was looking forward to the qualifying after the shower. But then I was having problems as we hardly had any traction. After two laps, the tyre had a lot less grip. The times were getting slower, although I got more and more used to the track. Unfortunately, there was not enough time to change anything on the car. You’ve got to stay outside and tackle your problems.”

Alexandre Prémat (Audi Bank Audi A4 DTM #17)
16th place, 1m 20.319s
“I’m very disappointed. On a dry track we were very strong at Barcelona. In the rain the situation was altogether different. My car was understeering too much. Our set-up for wet conditions was simply not good. Tomorrow will be another day.”

Lucas Luhr (Philips Audi A4 DTM #12)
17th place, 1m 20.483s
“Unfortunately, the show was over again very early. That’s really too bad. I had traction problems while accelerating out of corners and lost about three tenths of a second in the process. From position 17, it will be another tough
race.“

Vanina Ickx (Audi A4 DTM #21)
20th place, 1m 21.403s
“Unfortunately, that was a poor qualifying. And I’d even been waiting eagerly to go out, because I was looking forward to rain. Unfortunately, no grip developed and I was not doing well. That’s really too bad and doesn’t reflect our day either, because in dry conditions in the morning we were doing pretty well.”

Hans-Jürgen Abt (Team Director Audi Sport Team Abt Sportsline): “It was a qualifying with all the ups and downs. Martin Tomczyk delivered a commanding performance that showed the car’s potential. The others were wrestling with problems. We need to analyse this in order to solve it before the race. But we know that all of them are strong fighters and won’t let their spirits drop.”

Ernst Moser (Team Director Audi Sport Team Phoenix): “With neither of our two cars we managed to come up with enough grip. The drivers just kept slipping and sliding – no matter what set of tyres they used or what air pressure. In the constraints of time we didn’t manage to get the tyres working. That’s why we’re starting from 13th and 16th place – a big disappointment.”

Arno Zensen (Team Director Audi Sport Team Rosberg): “It was a gamble. Too bad because in the rain everyone had to take their chances. Lucas (Luhr) unfortunately dropped out early. ‘Rocky’ was doing great. Had he been six hundreths quicker he would have bumped Bruno Spengler form his position. That would have been sensational. Nevertheless, I’m satisfied with his performance.”

The starting grid at Barcelona