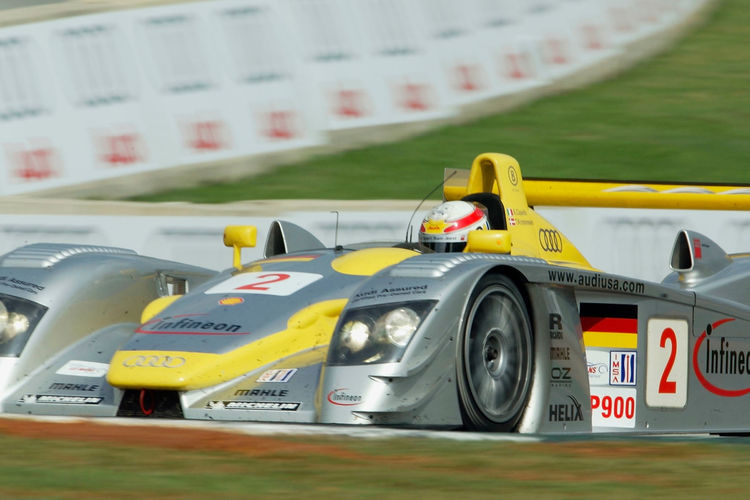 The new ALMS (American Le Mans Series) Champion is Tom Kristensen. As it was already clear before the final round at Road Atlanta, that only Audi drivers could achieve this years’ title, the 35-year-old Dane together with partner Rinaldo Capello won the classic “Petit Le Mans” to clinch the title and follow in the wheeltracks of Allan McNish and Emanuele Pirro. The companion Infineon Audi R8 of Frank Biela and Emanuele Pirro dropped back after a collision and the resulting lengthy repair stop but ultimately fought back to sixth position.

The race over 1000 miles in the US state of Georgia delivered all the ingredients of a real motorsport classic: Several safety-car-periods brought the 50 car field together again and again, the fight of the sport prototypes when lapping slower cars on the 2.540 mile long circuit added extra tension to the race. Rinaldo Capello and Tom Kristensen kept clear of every fight during the entire 9:27 race, chosing the right strategy with their pitstops to win by a 59.972s margin ahead of the 2001-spec Champion Audi R8.

Frank Biela, who had slim title hopes before the final round, and Emanuele Pirro, had less luck at Road Atlanta. On lap 150 of the 394 lap race, the Italian couldn’t avoid a collision with another car after its engine blew and seized. In record time, the Team Audi Sport North America changed the front left suspension as well as the front splitter and sent the Infineon Audi R8 back on the track after 26 minutes. Although their championship was over, the German-Italian duo recovered well and finally finished sixth.

After third place in the 2001 “Petit Le Mans“, the Champion team this year fought for the victory until they crossed the finish line. Even during the last hour of racing, the two leaders were seperated by only a few seconds. Only after the final pitstops it was clear that Johnny Herbert and Stefan Johansson had to be satisfied with second place. Herbert thus takes fifth position in the Driver’s championship just behind the Audi works drivers Tom Kristensen, Rinaldo Capello, Frank Biela and Emanuele Pirro.

With victory at Road Atlanta, one of the most successful years in Audi’s motorsport histoy comes to an end. For the third time in a row the Team Audi Sport North America has clinched the Driver’s, Teams’ and Manufacturers’ titles in the American Le Mans Series. This season, Audi drivers have conquered pole position at every race and brought home eight victories in a total of ten races. Highlight of the year 2002 remains the triple victory at the Le Mans 24 Hour race, which Audi won for the third consecutive time with the same driver pairing.

Rinaldo Capello (Infineon Audi R8 #2): „I want to congratulate Tom and I’m happy for him winning the title. I think I did a very good race today: When I took over the car from Tom we were in fifth position but ultimately claimed the victory. For me this is a nice finish of another great season with Audi. I would like to dedicate this race to our team coordinator who retires after this race. This victory is for Jürgen Däwel.”

Tom Kristensen (Infineon Audi R8 #2): “I’m so happy about my title, but it belongs as much to Dindo as it belongs to me. Once again, he made our victory possible with his fantastic speed. I want to thank everybody at Audi and the team for giving me the chance to win the Le Mans 24 Hour race and the ALMS Championship in this tremendous car.”

Frank Biela (Infineon Audi R8 #1): “The race was even more tough after the long pit-stop, because then we knew our championship hopes were finally gone. But at least we have tried everything and took some risks while fighting for the title. But even without an ALMS trophy we had a great year: We won Le Mans as well as several races in North America and fought for the championship until the very last round.”

Emanuele Pirro (Infineon Audi R8 #1): “Of course you always want to win a race or a title. But today I’m really happy with our season, because I think we can be proud of what we have achieved: We claimed eight pole positions and won three races. Last year we were lucky, this year sometimes we were a little unlucky.”

Johnny Herbert (ADT Champion Audi R8 #38): “Twice we were unbelievably unlucky with caution periods. Having just made scheduled pit-stops, on both occasions the full course yellows enabled the #2 Audi to make their stops without losing much time. Stefan and I duelled with Dindo and Tom for much of the race. It’s a shame that we didn’t win this race.”

Stefan Johansson (ADT Champion Audi R8 #38): “Normally I’d be satisfied with second place but not today. I’m gutted for the Champion Racing team who deserved a victory after finishing second so many times this season. I had sliced down Dindo’s lead from a minute to less than 30 seconds before I made a late short stop for fuel in the closing stages. The only thing we needed to do to the car during the race was change a damaged nose section - apart from that it ran like clockwork and never missed a beat.”

Ralf Jüttner, Technical Director Team Audi Sport North America: “Today the race could not have been more exciting. We had a tough fight with Champion and I would have been pleased to see them win, but of course I am more delighted that we could finish the season with a victory. Frank and Emanuele had a lot of bad luck, but they fought their way back to sixth position, which secured third and fourth places in the Driver"s championship ahead of Johnny Herbert. At the end of the race we did everything right, both cars came to the finish with almost a dry tank. Everyone in our team did a fantastic job througout the year. So many victories and titles we won in the last three years has never been achieved before. “

Dr Wolfgang Ullrich, Head of Audi Sport: “The race was extremely exciting. Frank and Emanuele had a lot of bad luck today - for them the race was almost over at mid-distance. Dindo and Tom did a great job. Congratulations to both of them. I am proud of what we have achieved: three times Le Mans winners, three times Sebring winners, three times Road Atlanta winners and three times winner of the ALMS Championship. I believe no one ever has achieved that before. I am very proud of the entire team.”