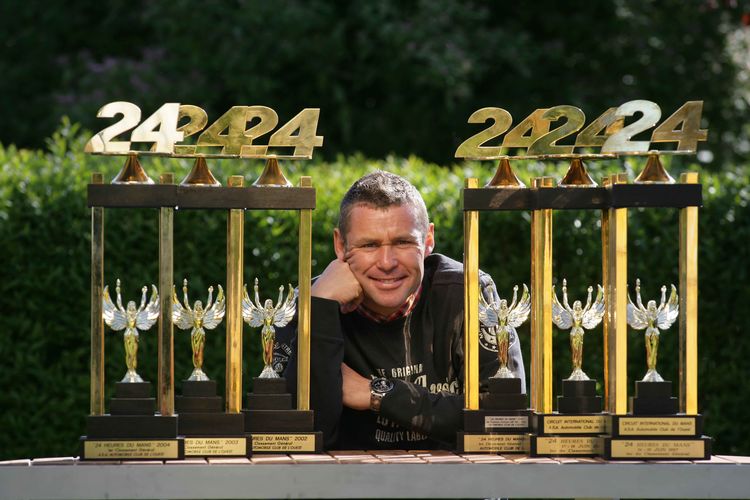 Tom Kristensen rarely finds peace and quiet during a brief pause in his favourite café, however cosy and peaceful the Café Adel, located in the small town centre of Hobro, may appear. Many of the 13,000 inhabitants living in the peaceful town in Northern Denmark saunter past the sunlit tables at lunch time, and almost all of them know the man who savours an espresso with his partner or friends. Barely a minute passes without someone offering congratulations for the most recent success or friendly motivation for the following race weekend.

There are ample reasons for this: Six Le Mans victories and, not forgetting, a few other titles, his excellent start in the DTM and his sincerity do not only make him Hobro’s most famous citizen, but also one of the most popular. Over the course of the next few days the moral support for the 37-year old Dane reaches a new peak: If Kristensen wins the 24-hour race in Le Mans again on 18/19 June, his seventh triumph, he would finally stand alone at the top of the winners’ list of the world’s most famous motor race – and therefore, even when he does not like to hear it, will become what his DTM team mates sometimes jokingly call him: a legend.

Kristensen fills his high demands again and again with life, for example with an impressive balance: “Irrespective of which race series I have previously competed in, I have always scored at least one victory.” Latest example: With fourth place as “Rookie” in Europe’s most popular touring car series, the DTM, he made a strong debut. And he obviously also claimed a victory, in Oschersleben, so that the statistics read correctly.

This is not only true for the race track, where he gained his reputation as a skilled all-rounder after starting in karts, competing in Formula 3 and Formula 3000, various touring car series’ and last, but by no means least, his job as a Formula 1 test driver. Tom Kristensen is also a professional out of the cockpit: He trains frequently on a bicycle – but only with the best equipment. He receives guests at his second home Hobro – every detail is perfectly organised. And he even looks after and checks his Internet page, one of the scenes most up-to-date and interesting, every day.

Not the Dane’s only hobby. Jet-ski numbers among Tom Kristensen’s passions just as playing football, at which his son Oliver is becoming an increasingly serious rival. “I think he is more likely to be a footballer than a racing driver. But that’s okay,” says the papa about his blonde haired heir, who already possesses his father’s humour and typical Danish coolness. The story about the DTM race last year remains unforgotten, when Oliver, armed with only 50 Euro and a mobile telephone, travelled alone in a sponsor’s fan bus from Denmark to Oschersleben. After his father’s victory a ringing mobile phone fervently disturbed the press conference, until Oliver irritatingly fumbled the telephone out of his pocket and reprimanded the caller rather harshly: “Mama, not now! I’m in the press conference!”

‘Mama’ that is Kristensen’s long-time partner Hanne. As well as Oliver, the couple also have a five-year old daughter Carla. They cannot wait for the current season to finish, when the family finally return to Denmark from their current place of residence in Monaco. Denmark is where Tom Kristensen was born in July 1967, where he completed his training as a qualified banker and also briefly worked there.

Hanne is slowly changing the bungalow, situated in a quiet side road in Hobro, into a small dream house filled with style and fantastic ideas: an open-plan kitchen, a living room flooded by natural daylight, beautiful woods, light furniture and a garden for messing around in – this is how Tom Kristensen and his family’s new home will look.

However, before the boxes are packed and make the long trip north, Tom Kristensen sets himself two challenges. The first, his involvement in the DTM is his ‘permanent relationship’, which takes priority and in which he is in the thick of the championship battle after the first four races. Three times on the podium, in fourth position within striking distance of the championship lead – the ambition could hardly be greater. And on the other side his “mistress”, namely the Audi R8. He achieved four of his six Le Mans victories with the most successful Le Mans prototype ever – and not in cruise mode, but often under the most difficult of weather conditions around the unpredictable circuit in La Sarthe. “I’m happy that I’ve been given the chance within the Audi family to realise my dream of another win at Le Mans,” says Kristensen. “Le Mans is of great importance to me particularly as the race helped to establish my name in motorsport.”

It is almost eight years ago to the day that his telephone rang. At the other end of the line was Ralf Jüttner, then, as now, Technical Director at Reinhold Joest’s team. It was, to cut a long story short, obviously about a seat in the Le Mans squad. There was an agreement, they won together, they briefly went their separate ways, since 2000 they are united again: Joest Racing assumed responsibility for the Audi R8 works entry from the very beginning, and new Audi works driver Tom Kristensen has belonged to the core team ever since. This year he co-drives with Marco Werner and JJ Lehto in the Audi R8 entered by the American Team ADT Champion Racing outfit.

The new home in Hobro is prepared for anything: Six small Le Mans trophies have already found space on the shelves. It would by a pleasure for Hanne, Carla, Oliver and Tom to make space for a seventh, and then they can all enjoy many peaceful hours together at Café Adel.