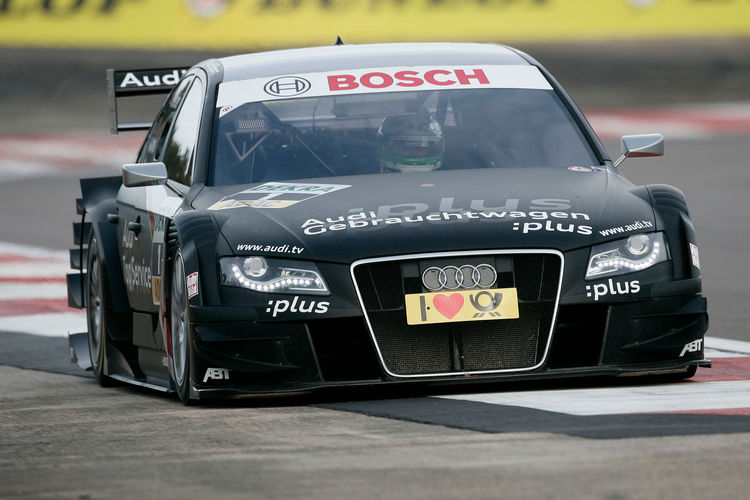 At the turbulent DTM debut at Dijon-Prenois, France, Audi driver Timo Scheider kept his cool and scored three important points by finishing in sixth place. The title defender will start to the finale at the Hockenheimring on October 25 with a seven-point lead over Gary Paffett (Mercedes).

This gives Scheider a cushion that is five points larger than the one he had a year ago when he secured his first DTM title by winning the race. This time, a fifth-place finish would even suffice for the 30-year-old in the event that Gary Paffett should win.

26,000 spectators (throughout the weekend) witnessed one of the most turbulent and curious DTM races of all time on the high-speed circuit of Dijon-Prenois at which tires played the crucial role. On the final laps many drivers had to drastically reduce their pace in order to finish the distance across the demanding track without risk. As a result, the first twelve vehicles crossed the finish line as a pack within just six seconds.

Audi was the front runner for the longest time at the DTM debut – in the form of the Red Bull Audi A4 DTM driven by Mattias Ekström. The Swede who had started from position four on the grid took the lead on lap 22 thanks to a good strategy of Audi Sport Team Abt Sportsline and subsequently held up to the pressure exerted by Gary Paffett despite the fact that Ekström was simultaneously trying to save his left rear tire that was subjected to particularly severe stress at Dijon. Nevertheless, the tire blew seven laps before the finish – and destroyed Ekström’s dream of a third DTM title in the process. A particularly bitter pill: At the Hockenheim season opener a tire puncture just before the finish had also deprived Ekström of victory.

But the Swede was not the only one to suffer misfortune at Dijon. Timo Scheider, Martin Tomzcyk, Oliver Jarvis and Tom Kristensen became victims of punctures as well. While Kristensen lost third place just before race end, Scheider was more fortunate despite the mishap: The leader of the standings was struck on lap 21, two turns before his first scheduled tire change. Consequently, Scheider’s time loss was not as severe. However, his Audi A4 DTM lost important aerodynamics components in the area behind the defective tire.

Prior to the puncture, Scheider had pushed forward into the points from position 16 on the grid by delivering a fantastic start and a strong early phase. “That really wasn’t bad on this difficult track,” commented Scheider. “In the end, I focused strictly on trying to take the car around the circuit and across the finish line. It was like walking a tightrope, but I managed it. Now I’ll be going to Hockenheim with a seven-point lead and ten kilograms less weight. That’s okay.”

Martin Tomczyk saved his tires in the final phase as well and thus took seventh place and two points across the finish line. Markus Winkelhock in tenth place was the best driver of a year-old A4.

“Of course that wasn’t the result we’d been hoping for,” said Head of Audi Motorsport Dr. Wolfgang Ullrich. “We knew that the track at Dijon would be critical for the tires, but thought we had the problem under control – there were no indications whatsoever even after the warm-up. But in the race we had a whole series of punctures, which is not helpful when you’re fighting for the championship. After the first defect we tried to control the pace to get through the race – unfortunately, not all the drivers managed doing that.”