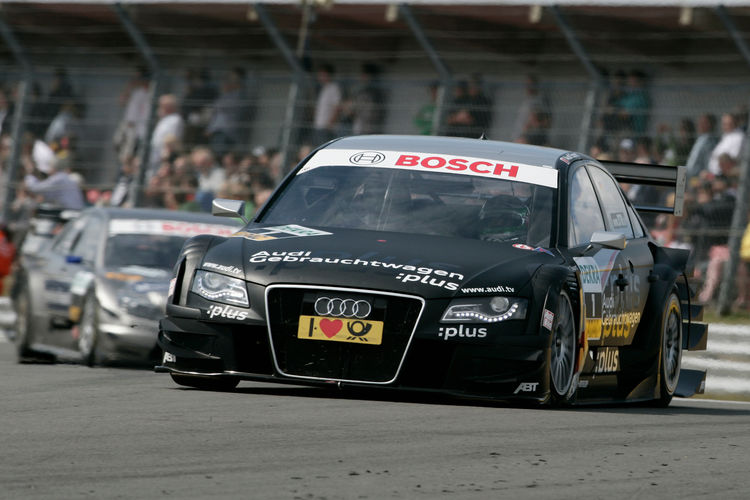 Audi has taken another small step toward achieving its big aim of becoming the first automobile manufacturer in DTM history to win a third consecutive DTM title: By clinching second place at Brands Hatch (Great Britain) after a fierce battle, Audi driver Timo Scheider extended his lead over the best Mercedes driver to nine points. Thanks to Mattias Ekström’s fifth place three races before the end of the season, two Audi drivers continue leading the standings.

On the shortest DTM track of the season, 20,400 spectators (throughout the weekend) witnessed a thrilling race with tough battles for positions, captivating overtaking maneuvers, collisions and two safety car periods in the final stage. Two Audi drivers, Timo Scheider and Martin Tomczyk, finished on the podium. A total of five Audi drivers scored points.

“We can live with this result very well,” said Head of Audi Motorsport Dr. Wolfgang Ullrich. “Of course you’d like to win every race, but that’s simply not possible. Paul (Di Resta) had a perfect weekend here. Still, we achieved the best outcome for Audi – particularly with a view toward the championship. I’m very happy that two of our guys are ranking at the very front.”

The big winner of the weekend was Timo Scheider, who managed to further extend his overall lead despite losing time at both pit stops. At the first stop, he got caught behind a slower vehicle at the pit lane exit. At the second stop, there was a problem with the right rear wheel. Nevertheless, Scheider was able to secure second place behind the winner Paul Di Resta.

“My goal had been to finish in front of Gary (Paffett) and Mattias (Ekström) and to extend my lead in the standings – fortunately I managed this although it was a difficult race, given the problems at the two pit stops,” said the leader of the standings after the race. “This cost a lot of time and was frustrating. Luckily I had a perfect car and was able to make up the lost time.”

Scheider received some support by his teammate Martin Tomczyk, who again drove a strong race. The Nürburgring winner prevailed against Mercedes driver Bruno Spengler in a tough duel from which Scheider benefited as well. He then voluntarily let the leader of the standings go ahead and settled for position three. “My car was outstanding,” raved Tomczyk. “But I think that all Audi vehicles were very quick today. I could have probably scored an even better result today but for me it’s clear that I let a team-mate pass who’s leading the championship.”

In view of position seven on the grid the race, as expected, was difficult for Mattias Ekström, who was bumped off the track on the first lap by Mercedes driver Jamie Green. With a good strategy, the Swede managed advancing to fifth place. Thanks to running on fresher tires the Audi driver made up ground to Gary Paffet in giant leaps in the dying laps of the race. Two safety car periods, however, destroyed Ekström’s hopes of still being able to overtake his rival for the title. Ekström, nevertheless, continues ranking ahead of Paffett in the standings.

Two other Audi drivers, Mike Rockenfeller and Oliver Jarvis, in places seven and eight, clinched points at Brands Hatch as well. Jarvis could have achieved a better result at his home race if he had not been turned around by Jamie Green. The Mercedes driver received a drive-through penalty for the incident.

Tom Kristensen and Markus Winkelhock became victims of attacks by rivals shortly before the end of the race as well: Winkelhock was bumped off the track by Ralf Schumacher, Kristensen by Bruno Spengler.

Alexandre Prémat received a drive-through for jump-starting. The Frenchman in the end finished in eleventh place. Katherine Legge finished 15th.