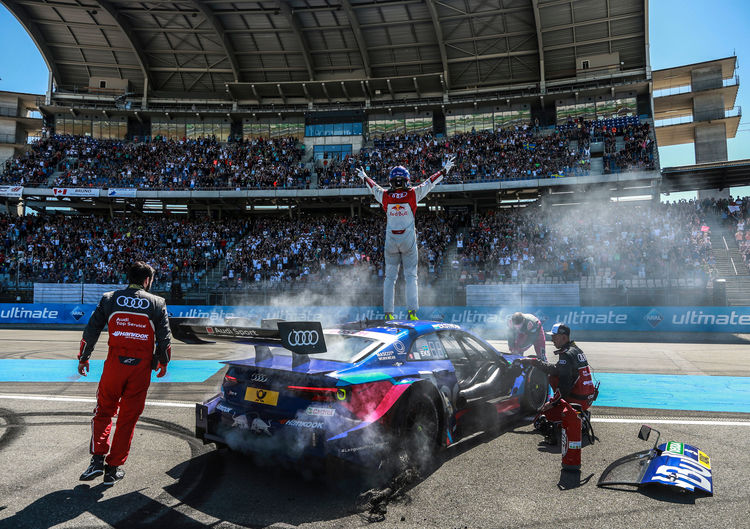 Picture-perfect weather, a fantastic crowd and arguably the most gripping DTM race of all time: The fierce on-track battles made it difficult for most of the spectators that had traveled to Hockenheim on Sunday to stay in their seats during the 36 laps. The principal performer for Audi was Mike Rockenfeller. In the final stage, the German profited from tough duels at the front of the field and in a fierce fight still managed to bump Saturday’s winner Gary Paffett in a Mercedes-Benz from second position. Only winner Timo Glock in a BMW was out of “Rocky’s” reach.

“That was an awesome race today,” said Rockenfeller. “My car was much better than yesterday. Qualifying wasn’t perfect, but the race was top. I was able to attack on both sets of tires. Because Timo (Glock) and Gary (Paffett) at the front kept overtaking each other Joel (Eriksson) and I came closer and closer. In the end, we had a four-way battle up until the last turn. It was mega fun and no doubt worth watching. I’m going to watch it myself again tonight. It’s been one of the coolest races I’ve ever driven.”

Head of Audi Motorsport Dieter Gass was only able to agree: “That was a fantastic show today, a superb race for the DTM in general. Those were incredibly thrilling battles from the beginning to the end. Simply fascinating! You could tell how the people in the grandstands enjoyed this. For us, it was also great to finish in second place today with Mike (Rockenfeller) after yesterday’s difficult opener. We didn’t expect this, so it’s even sweeter. I’d like to thank Mattias Ekström for all he did for Audi in 17 DTM years. I’m happy that we still have him as a driver in rallycross.”

The Swede enjoyed an emotional farewell from his DTM fans. After the checkered flag, it ended in donuts in front of the main grandstand and brought tears to the eyes of the two-time DTM Champion. Before the race started, his team had put on special jerseys in the Swedish national colors yellow and blue. Numerous fans and companions of the Swede, including Audi’s CEO Rupert Stadler, signed the hood of his Red Bull Audi RS 5 DTM. On Sunday morning, Ekström gave away 1,219 caps of his partner Red Bull – the Audi driver had scored exactly the same number of points in his unique DTM career. Many DTM fans wore masks with the Swede’s face and in Turn 1 across from the Audi Race Lounge a huge banner saying #AdjöMattias was displayed. The result (position 16) was of secondary importance.

Due to the gripping final stage of the race and Mattias Ekström’s farewell appearance, the performances of the other Audi drivers faded from the spotlight to some extent as well. Loïc Duval drove one of the best races in his still young DTM career that made him advance from twelfth on the grid to fifth position. Remarkably, the Frenchman this weekend was commuting between Hockenheim and Spa-Francorchamps where he contested the opening round of the FIA World Endurance Championship (WEC) as well.

Following the awesome season opener, the DTM will continue in just 14 days’ time, visiting the Lausitzring on May 19 and 20. There the series will be racing on the more demanding long version of the track again for the first time since 2004.