Audi driver Robin Frijns: “I have dreamed of the DTM for a long time” 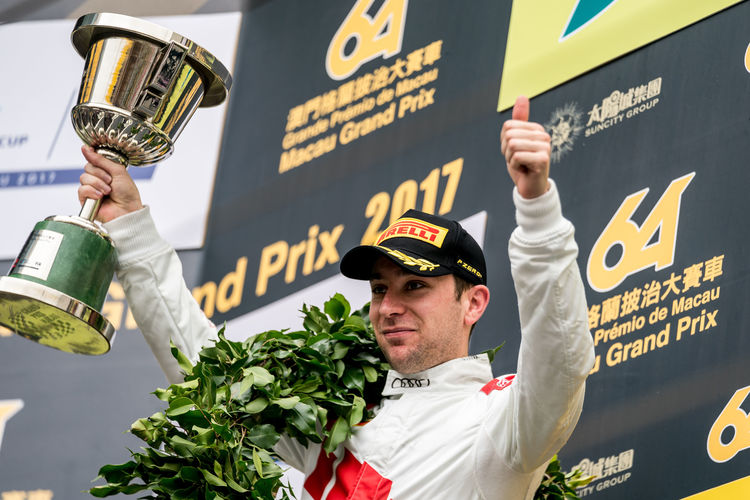 Robin Frijns recently became an Audi factory driver in the DTM. For the Dutchman it is a dream come true, which began during 2015 in the GT racing program of Audi Sport. In this interview, the 26-year-old looks back on his career and reveals his expectations for his rookie season in the DTM.

First of all: Could you please tell us how to pronounce your name correctly?
Frijns: “In real Dutch, my name gets pronounced as “Freijns” with a kind of long “e” sound. When speaking in English, the general pronunciation is “Frins” that has a short “i” sound. But, for me personally, it doesn't matter. As long as I know that it is me, everything is fine.”

Many young race drivers begin their career in karting, as you also did. From your point of view, is karting a good place to get started in racing?
“For me personally, it was definitely a good start for my motorsport career. In karting, I had the freedom to learn about motorsport, including all of the technical aspects. I very often worked on the cart and the chassis, in order to improve the set-up. One does not only learn about driving, but also all of the other aspects of racing.”

You have been active in single-seater racing before beginning your GT racing career with Audi Sport customer racing. How do you look back on this period of your career?
“I had three very successful years in single-seater racing, during which time I won titles against well-known names. I then had two years as a Formula One test driver with very limited driving time. I decided that I do not want that anymore and I took the chance to drive with Audi Sport customer racing and finally race again. I am very glad that I did that, we have had a lot of success together.”

You took part with Audi in the DTM Young Driver Test in 2013 and now five years later you have been selected as one of the Audi factory drivers and belong to the DTM squad. What was your reaction when you heard the news?
“I have dreamed of the DTM for a long time. It is an iconic championship with very exciting racing, exactly what I enjoy. So I was very happy and baffled at the same time when I received the news that I had been chosen as one of the Audi DTM drivers for the 2018 season. I cannot wait for the first race weekend!”

During your career in single-seater racing, you twice won titles as a rookie. What are your goals for your first season in the DTM?
“René Rast was very impressive last year and proved what is possible. But, I am remaining realistic. After all, I will be racing against drivers who have been active in the DTM for years, if not decades. My primary goal will be to get used to the car and the world of DTM as quickly as possible. I just want to have fun, because that makes me fast in the races as well. It will be even better if we can achieve podium results or even race wins.”

You have already chosen your starting number for the 2018 season. Do you have a specific reason as to why you chose the number?
“Yes, I will race with the number four on my Audi RS 5 DTM. It has accompanied me during my successful years in single-seater racing and brought me good luck. And hopefully it will continue to do so.”

Are you looking forward to racing in front of your home crowd in the Netherlands when the DTM takes place at Zandvoort later this year?
“Definitely! I attended the DTM race weekend at Zandvoort in 2017 and I was very impressed. The event is well attended with many local fans. I hope to see all of them there again this year! As the only Dutchman on the grid, I am very much looking forward to the event and local support.”

During your time as a GT racing driver, you have mostly had to share a car with one or more teammates, celebrating success on many occasions. At Macau, you were very successful driving alone and now in the DTM you will again be alone in the car. What do you prefer?
“I personally prefer to drive a race car by myself. Together with the team, I can work on the set-up step by step in order to suit it to me perfectly. It is of course a lot of fun to share a car with other drivers. But the set-up will always be a compromise. This is also a reason as to why I am looking forward to the DTM so much. It is a privilege to have your own car for your own preferences.”

What has been your best moment since beginning to drive Audi race cars?
“For me, my highlight so far was winning the Blancpain GT Series Sprint Cup title last year. Together with Stuart Leonard in an Audi R8 LMS from Belgian Audi Club Team WRT, we were not the favorites going into the final race weekend. But, I overtook many opponents during my stint and won the race, and in doing so, we won the title. Winning the drivers’ championship like that was amazing.”

What are your long-term goals?
“First of all my focus is on the DTM. For me it is simple. Whatever I do in motorsport, I want to be competitive and running at the front. I am looking forward to my first DTM season in order to do well, not only for myself, but also for Audi.”