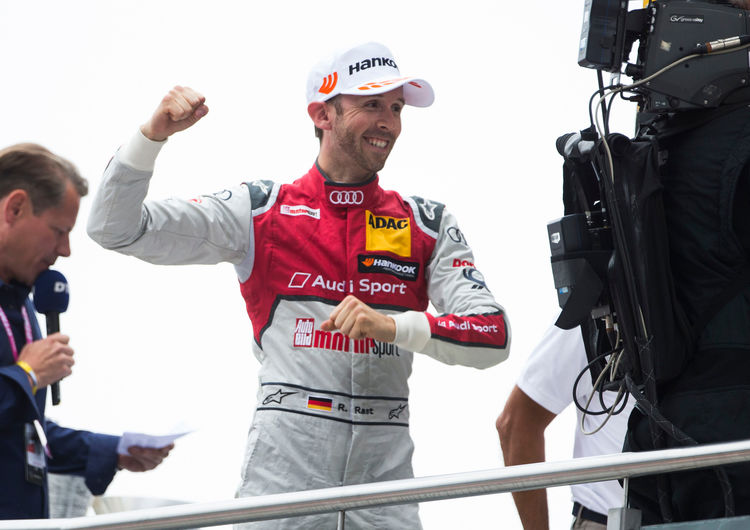 René Rast has made a long-held dream of his come true at the Lausitzring. The Audi driver came third in Saturday’s race, clinching the first ever podium in his still young DTM career.

Initial points in his second race, the front row in race five and now his first podium in his sixth event: René Rast proves why Audi has given him the opportunity to enter the DTM as a rookie at age 30. In qualifying at the Lausitzring, the German was the fastest Audi driver for the second time running. After starting the race from grid position four, he initially yielded to Timo Glock. Rast took it easy on his tires and passed the BMW again on lap 13. Following the pit stop, he overtook Maxime Martin’s BMW as well and went on to secure third place, trailing leader of the standings Lucas Auer and Robert Wickens (both Mercedes-Benz).

“I’m mega happy with today,” said the driver from Audi Sport Team Rosberg. “I was part of the DTM’s supporting program for a long time and always dreamed of mounting the podium in this series. Now the day has come. Getting there was a lot of work and a huge load has been taken off my chest.”

Head of Audi Motorsport Dieter Gass was full of praise for his protégé: “I’m tremendously happy for René (Rast) who delivered a podium here. He previously showed a superb performance in qualifying and then went on to up the ante. Mattias (Ekström) and Mike (Rockenfeller) were running well, too. Today, we have to settle for having put four cars in the points. Tomorrow, we’re going to attack again.”

Rockenfeller and Ekström pitted early to change tires, a strategy that allowed them to make up major ground. Rockenfeller (Audi Sport Team Phoenix) drove to position five from eight on the grid and Ekström (Audi Sport Team Abt Sportsline) from grid position twelve to position eight, while both drivers thrilled the crowd with numerous overtaking maneuvers. Particularly spectacular was Mattias Ekström’s feat of overtaking two BMW drivers, Augusto Farfus and title defender Marco Wittmann, in one go at the end of the long start-finish straight.

Jamie Green was forced to make a comeback as well. The Briton had received a grid penalty that moved him from the twelfth to the last position because in qualifying a used tire of his teammate René Rast had been mounted on his Audi RS 5 DTM by mistake. Not having anything to lose, the Briton ventured the most extreme strategy and pitted to change tires as early as on lap five, his bold move subsequently being rewarded with position ten.

Youngster Nico Müller was in the points too, but had to park his Playboy Audi RS 5 DTM nine laps before the end of the race due to a brake defect. Loïc Duval finished Saturday’s race in position 15. The Frenchman had received a five-second pit stop penalty for having jumped the start of the race. By setting consistently fast lap times, he subsequently showed that he is a campaigner to be reckoned with in the future as well.

Before race four of the season on Sunday (live coverage on “Das Erste” starting at 15:00, CEST), Mike Rockenfeller with 31 points to his tally in third place of the standings is the Audi driver with the best points score, trailed by Jamie Green with 27 points in position four and René Rast in sixth place.