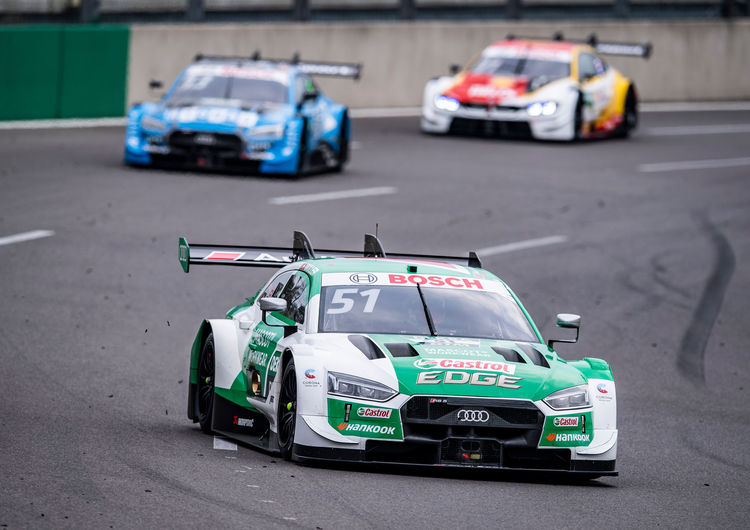 Three races, three victories: Nico Müller is the man of the hour in the DTM. After his double victory at the season opener at Spa, the Swiss driver also won Saturday’s race at the Lausitzring for Audi. Teammate Robin Frijns completed Audi Sport Team Abt Sportsline’s success with third place.

Müller is the first driver ever to win the first three races of a DTM season. Across two seasons, the Swiss is unbeaten for as many as four races. “Today’s success is largely due to my team,” said Müller. “Because I was racing in the Formula E finale in Berlin, I wasn’t able to be part of the usual preparation for the race weekend. The guys did a mega job, explained to me what I’ve got to look out for here and gave me a fantastic car. I had a good start, was able to stay in front afterwards and bring the victory home. I’m very happy.”

After setting the fastest times in both free practice sessions on Friday, Müller started the first of the two races at the Lausitzring from second on the grid. The Swiss immediately took the lead at the start and was able to extend it to 7.5 seconds. “Then there was a slow zone and two lapped cars in front of me drove so slowly that I almost lost my entire advantage. Sheldon (van der Linde) was almost hanging on my bumper afterwards. Fortunately, I was able to pull away again,” said Müller, who also set the fastest lap of the race.

Teammate Robin Frijns secured pole position just like at the season opener at Spa. “I didn’t expect that because on Friday I was four tenths of a second behind Nico, but we worked hard overnight,” said the Dutchman. “When you finish on the podium you can never complain. The first ten laps I felt really comfortable. I was able to put pressure on Nico. But after ten laps my tires seemed to drop more than the others’. We have to change that for tomorrow."

Third best Audi driver was Ferdinand Habsburg from the customer team WRT Team Audi Sport in sixth place. The Austrian vehemently resisted René Rast’s attacks in the final stages. The DTM champion from Audi Sport Team Rosberg experienced a difficult Saturday. “I can’t remember having had such a tough day in the DTM over the past two or three years,” said Rast, who finished seventh. “We just have no pace here so far.”

Audi Sport Team Phoenix had a lot of bad luck. Loïc Duval scored one point for third place on the grid and fought for a podium in the race before the Frenchman retired with a transmission issue. A post-race 30-second time penalty was imposed on Mike Rockenfeller for exceeding the speed limit in the slow zone.

“Nico’s performance today was really outstanding,” said Head of Audi Motorsport Dieter Gass. “Only the slow zone could slow him down. But even there he remained cool and confident. He clearly was the fastest driver in the field today and absolutely deserves the victory. It was the tenth victory in a row for the Audi RS 5 DTM. This has never happened before in DTM. Everyone at Audi Sport can be proud of this. But we’ve also seen a competitive race from everybody. There were many fights. This is exactly what the spectators want to see. Of course, we hope that we can maintain our good form tomorrow as well.”

The second race on the Lausitzring sprint circuit will start on Sunday at 1:30 PM. SAT.1 will be broadcasting live from 1 PM CEST.