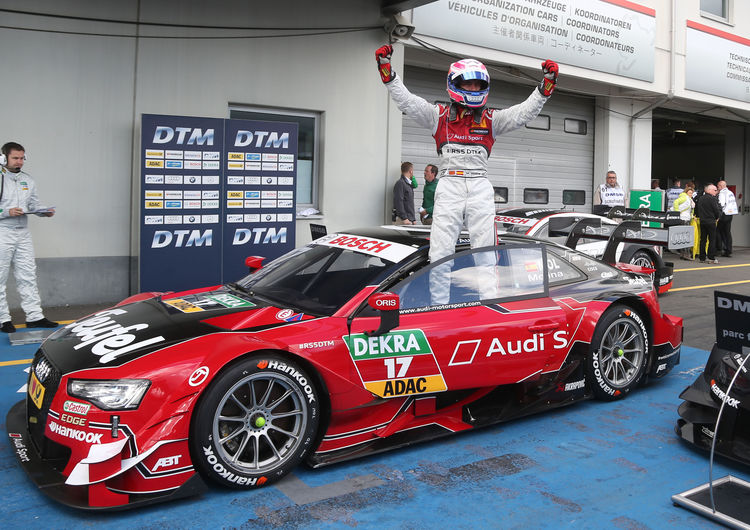 In his 67th DTM race, it finally worked out: the Catalonian Miguel Molina celebrated his first DTM victory at the Nürburgring. For Audi, it marked the eighth success in the 16th race of the season.

69,000 spectators witnessed two turbulent DTM races in the Eifel with a particularly high level of mid-field action that Miguel Molina, however, hardly noticed on Sunday. After clinching pole position in commanding style in the morning in the Teufel Audi RS 5 DTM of Audi Sport Team Abt Sportsline, he instantly pulled clear of the competition at the start in the afternoon race and ultimately crossed the finish line as the uncontested winner with a 7.5-second advantage.

“What a fantastic day,” Molina beamed following his victory. “I’ve been waiting so long for this moment and hope this was just the beginning. My RS 5 was simply perfect today. ‘Thank you’ to Audi and especially to my mechanics that did a fantastic job after my accident yesterday.”

The second-best Audi driver on Sunday was Mike Rockenfeller in the Schaeffler Audi RS 5 DTM of Audi Sport Team Phoenix in seventh place. The 2013 DTM Champion kept his first set of tires longer than most of the other drivers and following his pit stop was within striking distance of leader of the standings Pascal Wehrlein (Mercedes). Wehrlein, however, was backed by his brand colleague Maximilian Götz, so that Rockenfeller as a lone fighter had no chance against two Mercedes cars.

Mattias Ekström, in eleventh place, barely missed scoring points. From position 17 on the grid, the Swede in the Red Bull Audi RS 5 DTM advanced to eleventh place and was in the points for some of the time. However, a slow pit stop cost valuable time and subsequently deprived him of the opportunity to make up additional ground. In the final third of the race, Ekström was stuck behind the Mercedes of Daniel Juncadella.

Adrien Tambay in the Playboy Audi RS 5 DTM advanced from grid position 22 to twelfth place. Nico Müller (Audi Financial Services Audi RS 5 DTM) and Jamie Green (Hoffmann Group Audi RS 5 DTM/both Audi Sport Team Rosberg) had to settle for positions 16 and 17. In qualifying, Green had secured a good starting base for the race on clinching position three but stalled at the start, which caused him to hopelessly lose ground.

After second place the day before, Edoardo Mortara was forced to park his Castrol EDGE Audi RS 5 DTM early on Sunday following a collision with Timo Glock. For Timo Scheider (AUTO TEST Audi RS 5 DTM), the race ended in the gravel of turn one after being hit by Mercedes driver Robert Wickens.

Before the DTM finale at the Hockenheimring on October 17/18, Edoardo Mortara and Mattias Ekström with deficits of 37 and 38 points, respectively, still have a small mathematical chance of intercepting leader of the standings Pascal Wehrlein (Mercedes). The decision in the manufacturers’ classification will only be made at Hockenheim as well.

“I’m very happy for Miguel (Molina),” said Dieter Gass, Head of DTM at Audi Sport. “His first victory was simply overdue. Having clinched five pole positions, he repeatedly indicated his potential. Today, he was finally spared from suffering misfortune in a race. With a view towards the championship, of course, the way the race went was anything but optimal.”