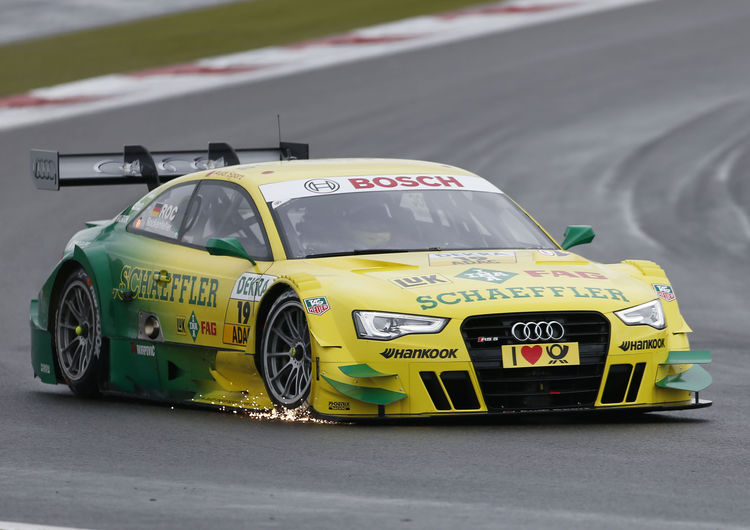 Thanks to a clever strategy of Audi Sport Team Phoenix and keeping a cool head Audi driver Mike Rockenfeller was able to extend his lead in the overall standings to 35 points at the Nürburgring.

84,000 spectators (throughout the weekend) experienced the most thrilling and spectacular DTM race of the year to date in which rain set in during the formation lap. Following a turbulent starting lap with numerous slips, spins and contacts, the safety car was deployed – and at that point in time Mike Rockenfeller in the Schaeffler Audi RS 5 DTM was running at the end of the field after having to evade a rival in turn one.

Audi Sport Team Phoenix based in Meuspath in immediate proximity to the Nürburgring opted for a risky strategy that in the end fully paid off.  The team called Rockenfeller to the pits for switching to rain tires while the safety car was still deployed. On optimal tires, ‘Rocky’ managed to battle his way forward from 20th place to the front of the field within just five laps and to commandingly achieve an advantage of nearly half a minute. Despite having to make an additional pit stop on account of the strategy, it was ultimately enough for him to take fourth place and another twelve points on a drying track. These points are particularly valuable as his so far fiercest immediate rivals, Bruno Spengler (BMW) and Gary Paffett (Mercedes-Benz, did not finish in the points.

“Today, I’ve got to express a special ‘thank you’ to my guys: This fourth place can be fully credited to Team Phoenix,” said the leader of the standings after the spectacular race. “Joey (Hand) almost ruined it for us in turn one but the team kept cool and did everything right. I want to thank the team for that!”

The other Audi drivers were entangled in numerous rough duels and thrilled the spectators at the Nürburgring with spectacular overtaking maneuvers. Adrien Tambay in the Audi ultra RS 5 DTM of Audi Sport Team Abt Sportsline in sixth place scored points for the second consecutive time. Rockenfeller’s team-mate Miguel Molina (Audi RS 5 DTM) in eighth place claimed the first points of the year despite the fact that the Spaniard, due to a slip at the race’s mid-point, suddenly lost seven positions. Jamie Green (Red Bull Audi RS 5 DTM), following a botched start, battled his way forward to ninth place.

The two drivers of Audi Sport Team Rosberg just barely missed scoring points. Filipe Albuquerque (Audi Financial Services RS 5 DTM/eleventh place) lost valuable time in the pits. Edoardo Mortara (Playboy Audi RS 5 DTM/twelfth place) spun in the starting commotion after contact with the BMW of Bruno Spengler and was subsequently hit by Robert Wickens (Mercedes-Benz), who ultimately finished the race as the winner. Mattias Ekström (Red Bull Audi RS 5 DTM/13th place) lost ground due to several tussles and incidents of body contact. And the string of misfortune suffered by Timo Scheider just doesn’t seem to want to end. The two-time DTM Champion had to park his AUTO TEST Audi RS 5 DTM after only eight laps after the rear of the car had been brushed on the straight and he spun off track.

“I think the spectators really got their money’s worth today,” commented Dieter Gass, Head of DTM at Audi Sport. “Mike (Rockenfeller), thanks to a clever move by his team, made another major step forward in the Championship today and now has a 35-point lead. The strategy of banking on three pit stops and changing to rain tires during the safety car period fully worked out and was rewarded in the end. With four Audi RS 5 DTM cars in the points we can be pleased on the whole even though we could probably have achieved even more.”

After a four-week break, the DTM will continue at Oschersleben on September 15. Prior to that, the FIA World Endurance Championship (WEC) at São Paulo (Brazil) is on Audi’s agenda, which Audi, with the R18 e-tron quattro hybrid race car, is leading as well.