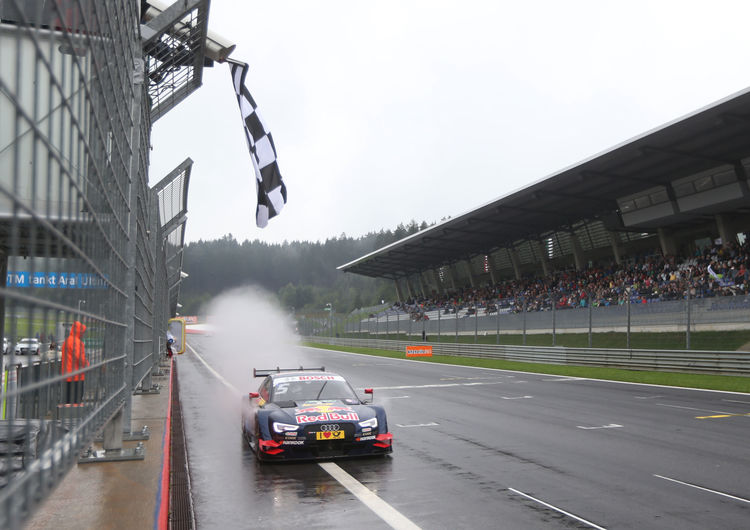 With an impressive performance in the wet race at Spielberg (Austria) Mattias Ekström (Audi Sport Team Abt Sportsline) took the lead of the DTM drivers’ standings at the Red Bull Ring. Following a victory on Saturday and third place on Sunday, his team-mate Edoardo Mortara is the runner-up in the standings.

52,000 spectators (throughout the weekend) watched two spectacular DTM races in highly different conditions. After perfect weather on Saturday, heavy rain on Sunday made for difficult conditions and numerous slips, with Mattias Ekström once more proving his class. The Swede in the Red Bull Audi RS 5 DTM secured the top spot on the grid, led the race from the first to the final lap and drove the fastest race lap as well.

“The conditions were extreme and that’s why the race was pretty exciting because it would have been easy to make a mistake,” the Swede said following the 21st victory in his DTM career with which he took the lead of the drivers’ standings as well. “I had to give everything because Gary (Paffett) came closer and closer towards the end. My aim was to finally mount the podium at the Red Bull Ring. That it became the top step right away is obviously twice as sweet.”

Following his victory on Saturday, Edoardo Mortara in the Castrol EDGE Audi RS 5 DTM achieved another podium result on Sunday. The Italian started from position six and advanced to third place. In the drivers’ standings, the Italian is now trailing Mattias Ekström in second place.

Drivers from Audi Sport Teams Phoenix and Rosberg – Mike Rockenfeller (Schaeffler Audi RS 5 DTM) and Nico Müller (Audi Financial Services Audi RS 5 DTM) – finished in the top five as well. Rockenfeller started from the front row, but first had to yield to Gary Paffett and subsequently to Edoardo Mortara. Müller recovered from grid position eleven to fifth place and, just like Rockenfeller, achieved his best result of the season.

In sixth place, Timo Scheider in the AUTO TEST Audi RS 5 DTM crossed the finish line. The two-time DTM Champion was cleverly slowed on the last laps by Mercedes driver Robert Wickens – presumably with the objective of helping his brand colleague Pascal Wehrlein. Following a fierce three-way battle, on braking, slight contact occurred between Scheider and Wickens, to which both Mercedes drivers fell victim.

“That was obviously not a nice ending of an otherwise tremendous race,” said Head of Audi Motorsport Dr. Wolfgang Ullrich. “What was done with Timo was not the proper way to go about things. But it was most definitely not my intention that Robert (Wickens) and Pascal (Wehrlein) end up in the gravel trap. I’m sorry that I shouted, ‘Timo push him out’ in my initial emotion at the command post. I do not communicate with the drivers by radio during the race and did not know that the radio was open. This was not an instruction for Timo by any means. I can only apologize to Mercedes for this remark. An expression like that does not reflect my idea of motorsport, but was strictly due to the adrenaline at that moment. I’m a racer and was fuming about the way Timo was dealt with. It’s a shame that due to this incident a shadow has been cast on the impeccable performance delivered by Mattias and the entire Audi squad. Our Audi RS 5 DTM was the strongest car here, both in dry and wet conditions.”