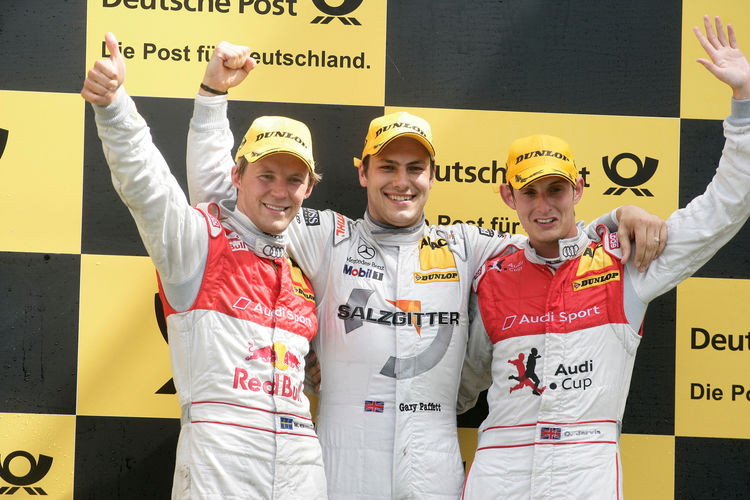 In front of 38,000 spectators (throughout the weekend) Audi driver Mattias Ekström showed why he is regarded as the “King of Zandvoort”: With an impressive recovery, the Swede fought his way forward from position nine on the grid to second place at the fourth round of the DTM. In the end, the two-time DTM Champion was just short of 1.431 seconds from achieving his fourth Zandvoort triumph.

The recovery was made possible by a perfect strategy of Audi Sport Team Abt Sportsline. Ekström only came in for his first mandatory pit stop on the 21st of 41 laps and picked up his second set of tires on lap 29 – later than any other driver. Consequently, Ekström had the freshest tires in the final phase which enabled him to reduce the gap to front runner and winner Gary Paffett from over six to under two seconds within just a few laps, despite the fact that the right rear wheel nut was jammed during the second pit stop.

On the final twelve laps of the thrilling race Ekström consecutively passed his brand colleagues Martin Tomczyk, Alexandre Prémat and Oliver Jarvis as well, who were running on considerably older tires and therefore had no reserves left to fight Ekström. “That they wouldn’t make life unnecessarily difficult for a quicker brand colleague in such a situation is natural at Audi,” explained Head of Audi Motorsport Dr. Wolfgang Ullrich. “There are no team orders required for this.”

In the final stage Oliver Jarvis had the oldest tires. The 25-year-old Briton started from the pole position for the first time in the DTM and defended his lead up to the first pit stop. However, a minor slip on lap 14 caused Jarvis to drop behind the later winner, Gary Paffett. “That was a stupid mistake which cost everything,” commented Jarvis, upset about his mishap. “Today I had the chance of winning – no question about that.”

Because the tires had been affected by his slip, Audi Sport Team Phoenix decided to call Jarvis to the pit lane again just six laps after his first tire change. As a result, the young Briton had to run 26 laps on the same set of tires. “In the end I had no chance left at all – I even thought I had a puncture,” said Jarvis. “On top of that, I had to save fuel.”

The Briton nonetheless clinched third place, and thus a podium result, as he had at the season opener at Hockenheim. Behind him, his team-mate Alexandre Prémat, Martin Tomczyk and Markus Winkelhock crossed the finish line. With Timo Scheider finishing in eighth place, a total of six Audi drivers scored points. Scheider had to park his Audi A4 DTM immediately after crossing the finish line because about two kilograms of fuel had remained in the fuel can during the pit stop.

Le Mans record winner Tom Kristensen had to settle for eleventh place. Mike Rockenfeller damaged a tie rod in a starting collision and retired nine laps before race end for safety reasons. The same was true for Katherine Legge, who parked her A4 DTM after 17 laps.

Note to editors:
Due to a subsequent investigation by the race stewards, the results are provisional.