{{ activeItem() }}
Twitter
05/06/21
A journey through time: Looking back on our first-ever overall victory at the @24hNBR 2012 with @MarcBasseng,… https://t.co/wCrvLxQSPs
05/06/21
Welcome to Monaco. 🇲🇨 Getting everything unpacked and set up. The fourth @FIAFormulaE Monaco E-Prix will be taking… https://t.co/q4kOQNhSA7
05/06/21
[1/2] Good luck to the Audi teams this week: 🇫🇷 @GTWorldChEu &amp; @ffsa_gt at @MagnyCoursTrack 🇩🇪 @24hNBR Qualifying… https://t.co/42uNnY8OMk
05/05/21
Monaco E-Prix 2021, round 7 of the 2021 @FIAFormulaE World Championship. &gt;&gt; https://t.co/ktQ0jlvX5F… https://t.co/WPedrsmwAh
Audi Sport on Twitter
{{ activeItem() }}
Facebook
05/06/21
Traveling through time with our history at the ADAC TOTAL 24h-Rennen Nürburgring: Join us on looking back at each of our five overall victories, starting the journey with our maiden victory in 2012. Audi Sport driver Frank Stippler recalls the race when he and his teammates won the 24-hour classic at the Nürburgring Nordschleife. #PerformanceIsAnAttitude #24hNBR
05/05/21
Monaco has hosted the ABB Formula E three times so far. Our highlights include two runner-up finishes for Lucas Di Grassi in 2015 and 2017. The 2021 Monaco E-Prix will take place on Saturday, May 8. >> audi.com/FormulaE #FutureIsAnAttitude #MonacoEPrix
05/03/21
Two podiums and the championship lead for Audi Sport Italia at Autodromo Nazionale Monza highlighted the past race weekend for our customers worldwide. Well done to all! 🇮🇹 🇦🇺 🇺🇸 >> audi.com/GT3 >> audi.com/TCR #PerformanceIsAnAttitude
05/03/21
RACE WEEK: 🇲🇨 ABB Formula E Monaco E-Prix on May 8. Strap in for a ride around the circuit with Lucas Di Grassi in the Audi RS e-tron GT*. >> audi.com/FormulaE #Audi #etronGT #FutureIsAnAttitude #MonacoEPrix -------------------- *Power consumption combined: 20.2-19.3 kWh/100km (NEDC); 22.5-20.6 kWh/100km (WLTP); CO2 emissions combined: 0 g/km. Information on fuel/electricity consumption and CO2 emissions in ranges depending on the equipment and accessories of the car. Further information: www.audi.com/dat.
Audi Sport on Facebook 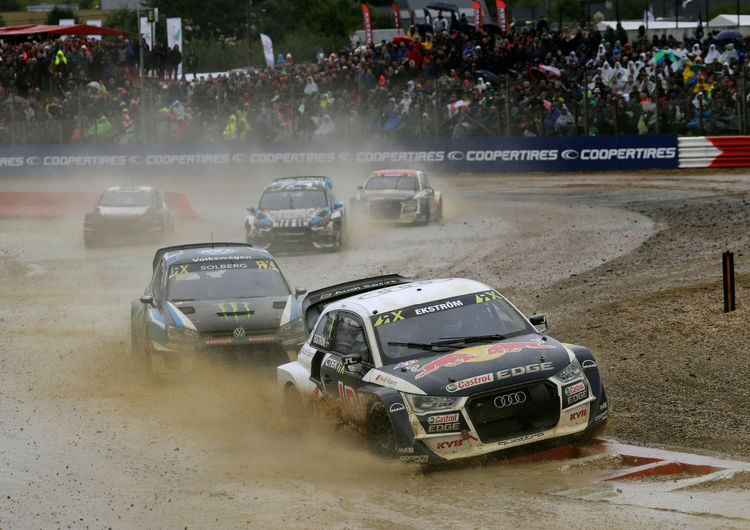 Mattias Ekström is back on the road to success in the FIA World Rallycross Championship. At the ninth round in Lohéac, the reigning World Champion finished third – the first podium result since his victory in Hockenheim last May. In front of 75,000 spectators, the Swede was only beaten in the final by his countryman Johan Kristoffersson and the French local matador Sébastien Loeb. In the overall standings, Ekström is third behind Kristoffersson and his team mate Petter Solberg – also like EKS in the team classification.

Following heavy rain, the final race in Brittany became a mud festival featuring many overtaking moves. “Saturday sun and Sunday rather more swimming and sliding, a varied weekend,” confirmed Ekström. “I’m actually quite satisfied with my third place, but I’m a little annoyed because we weren’t so far from the front. In the dry and in the rain we were just missing a tiny bit, but we can certainly build on the performance.”

In Lohéac, Ekström’s team mates Reinis Nitišs and Toomas Heikkinen once again made the semi-final races for the twelve fastest drivers, but drew the short straw at this stage. “After contact with Andreas Bakkerud my wipers stopped working, from there on I was running blind,” summarized Nitišs and added: “I’m disappointed with the result because it doesn’t show our real performance.” Heikkinen missed the final after a collision with Ken Block. “I initially had problems with the pace, but at least made the semi-final, but after skating through the gravel bed that was it.”

Audi DTM driver Nico Müller celebrated an impressive debut. In the fourth Audi S1 EKS RX quattro, the Swiss set fast laps from the very beginning on his rallycross premiere. Unfortunately he missed the semi-final after finishing 17th overall due to two collisions that were not of his making. “Even though the result is not what I’d hoped for, the weekend was great fun and I’d love to come back,” summarized the Swiss. After the weekend in France a long journey is on the schedule for Audi and EKS. The team must travel around 2,600 kilometers to the next round in Riga. The tenth of twelve World Championship rounds is held in the Latvian capital on September 16–17.