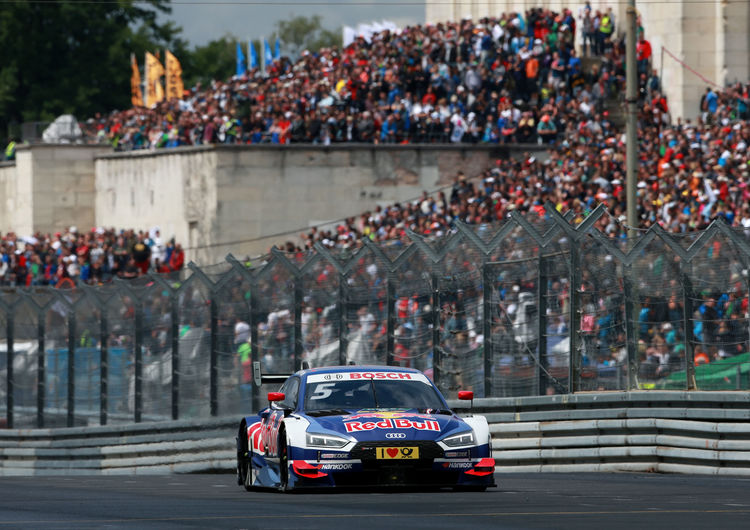 Mattias Ekström is the new DTM leader. The Swede from Audi Sport Team Abt Sportsline secured the top spot in the standings on finishing Saturday’s race at the Norisring in third place.

Following a heavy rain shower shortly before the start, all cars entered the race on rain tires. In the difficult conditions, seasoned campaigner Ekström immediately improved from sixth to second place and went on to battle with BMW driver Maxime Martin throughout the race. “In rain, Maxime was faster, so I let him pass,” said Ekström. “Then, on a dry track, I really fought hard, approached him again and even got past him once. Unfortunately, my pace in turn one was a little too fast, so he took second place again. But I have no reason to complain: I’ve clinched a podium, many points and the championship lead.”

Three Audi campaigners – Ekström, René Rast and Jamie Green (both Audi Sport Team Rosberg) – are in the top three spots of the drivers’ standings after race seven of the season. Rast secured a position on the front row for an amazing fourth time this year, which earned him two additional points. In the race, Rast drove his first DTM kilometers on a wet track, defending fourth place before crossing the line after the tire change on the still wet pit lane exit for which he received a drive-through penalty. In position twelve, Rast finished the race out of the points.

Rast’s teammate Jamie Green improved from ninth to seventh place. Nico Müller saw the checkered flag in position nine and, as a result, helped Audi extend its advantage in the DTM manufacturers’ classification to 70 points. In the teams’ classification, Audi Sport Teams Rosberg and Abt Sportsline are in the top two positions.

Audi Sport Team Phoenix scored no points in Nuremberg on Saturday. Mike Rockenfeller in the early stage was running in position six, but was ordered by race control to let three rivals pass for having left the track on the inside during the commotion in turn one. Further into the race, he received a drive-through penalty due to a collision with Mercedes-Benz driver Edoardo Mortara. Rockenfeller finished 13th and his teammate Loïc Duval 15th in his first DTM race on a city street circuit.

“I have somewhat mixed feelings today,” said Head of Audi Motorsport Dieter Gass. “Mattias (Ekström) drove a clean race and, with a podium finish, took the championship lead. I’m happy that he’s here. However, in terms of points, we had greater potential today. The incident with René (Rast) was very frustrating because he could have easily scored points.”

The second DTM race at the Norisring will start on Sunday at 5:20 PM CEST (live on “Das Erste”).