{{ activeItem() }}
Twitter
03/05/21
.@abtmotorsport is returning to the @DTM in 2021 with two Audi R8 LMS entries. The driver line-up includes two Audi… https://t.co/NEgKa5fmQB
03/04/21
Wishing good luck to all of the Audi teams racing this week: 🇺🇸 @GT4America at @RaceSonoma 🇺🇸 @gt_america_ at… https://t.co/8Il0DLQdlH
03/02/21
Team Rosberg will run two Audi R8 LMS entries in the 2021 @DTM season. The team’s line-up includes Audi Sport drive… https://t.co/28Jii1M4dW
03/01/21
Wishing a happy birthday to Audi Sport driver @weerts_charles. &gt;&gt; https://t.co/lBfInLStG8… https://t.co/AvDY6qdG5B
Audi Sport on Twitter
{{ activeItem() }}
Facebook
02/27/21
We are saddened to hear the news about the passing of Hannu Mikkola, a longtime friend of Audi Sport and the World Rally champion with Audi in 1983. We send our sincere condolences to his family and friends.
02/26/21
Strong pace for the Audi e-tron FE07 in Diriyah: Fourth place for René Rast and Lucas Di Grassi moved forward seven places to ninth. Both cars in the points and tomorrow we race again. >> audi.com/FormulaE #FutureIsAnAttitude #DiriyahEPrix
02/25/21
Audi Sport ABT Schaeffler in the 2021 ABB Formula E World Championship. First-ever Formula E night races coming up on Friday and Saturday at 20:03 local time (18:03 CET). Broadcast info >> fiaformulae.com/watch #FutureIsAnAttitude #DiriyahEPrix
02/24/21
Three E-Prix so far in Diriyah since 2018 with our highlight in 2019: Lucas Di Grassi on the podium with a runner-up finish. Aiming for more this week in the first two night races in ABB Formula E history, February 26–27. >> audi.com/FormulaE #FutureIsAnAttitude #DiriyahEPrix
Audi Sport on Facebook 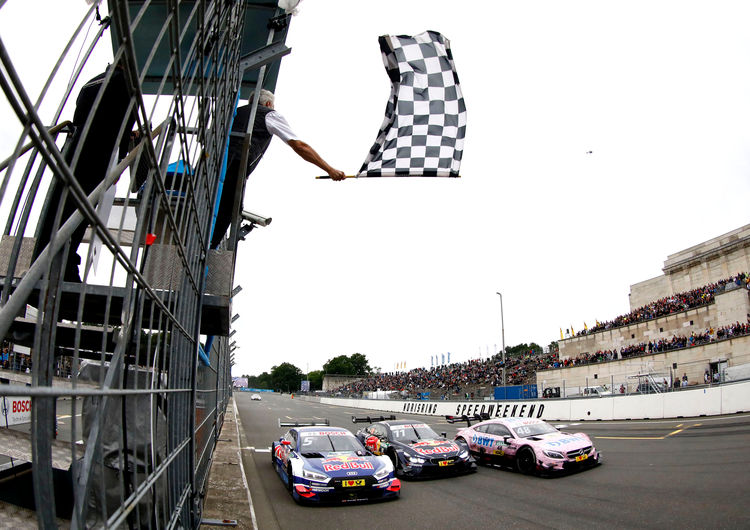 Following a third place on Saturday and a fourth place on Sunday, Audi driver Mattias Ekström from Audi Sport Team Abt Sportsline is leaving the Norisring as the leader of the DTM’s overall standings.

Sunday’s highly dramatic race on the DTM’s only city street circuit was overshadowed by a severe accident in which Audi driver Mike Rockenfeller was involved, but not at fault.At the end of the start-finish straight, Rockenfeller’s Audi RS 5 DTM was hit by the out-of-control Mercedes-Benz of the Briton Gary Paffett. In the heavy collision, Rockenfeller sustained a fracture of the fifth metatarsal bone of his left foot.

“We’re happy that nothing more serious happened to Mike (Rockenfeller) and also to Gary (Paffett) in this really horrible-looking accident,” said Head of Audi Motorsport Dieter Gass. “This proves once again how high the safety standards are in the DTM. Generally, this was a difficult race for us today with a disappointing outcome – especially when I look at the last turn. Marco Wittmann was a little too motivated today because he already overtook Mattias (Ekström) off-track in the beginning and even hit his car in the process.”

Following a hectic early stage with numerous collisions, the race was red-flagged on lap 33 after Gary Paffett and Mike Rockenfeller’s accident. Following the restart, Mattias Ekström initially defended fourth place before the Swede overtook Marco Wittmann’s BMW on the penultimate lap, taking third place. Ekström, however, lost his deserved third place again when Wittmann hit him in the rear in the final turn and Mercedes-Benz driver Edoardo Mortara benefited from this in a spectacular photo finish.

“My race was very entertaining,” said Ekström, who is ranking in the overall standings with a two-point advantage in front of Lucas Auer (Mercedes-Benz) and eleven points ahead of Sunday’s winner Maxime Martin (BMW). “My start wasn’t so great and my stint up until the red flag was very wild. Following the restart, I was running in fourth the whole time. Then I benefited from the battle in front of me. Unfortunately, Marco Wittmann pushing me in the last turn caused me to end up in fourth place again. Still, it was a good weekend with many points and the championship lead.”

Besides Mattias Ekström, only Jamie Green from Audi Sport Team Rosberg scored points for Audi on Sunday. After a difficult qualifying, the Briton started from position 14, changed tires after just one lap and with this strategy advanced to eighth place. His teammate René Rast retired after a collision with Robert Wickens (Mercedes-Benz).

Last year’s winner Nico Müller, after a strong performance in qualifying plus one point for grid position three, had to settle for 13th place in the race. Loïc Duval from Audi Sport Team Phoenix was the only driver not to have pitted yet when the race was interrupted. While Duval collected his first kilometers as the race leader in the DTM this way, he dropped to position 15 following the tire change.

“Today, we were a little unfortunate,” said Head of Audi Motorsport Dieter Gass, summing up the race. “But that’s how it goes in racing at times. We continue to lead all three classifications and are going to leave no stone unturned to strike back at Moscow in three weeks’ time.”