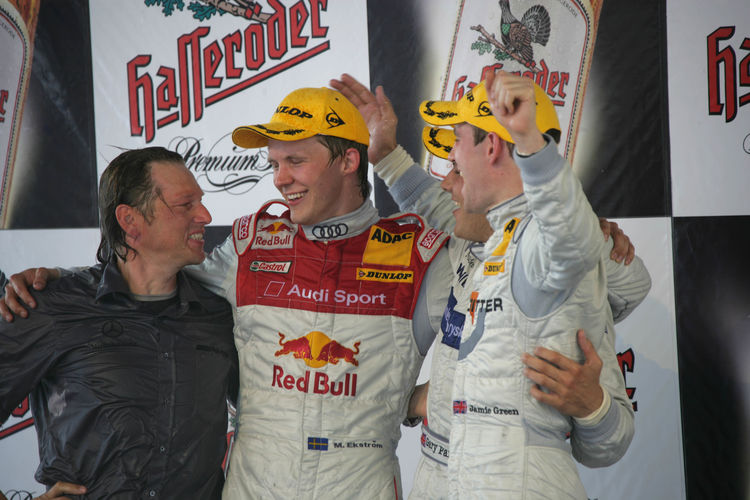 In front of a record turnout of 88,000 spectators, Audi driver Mattias Ekström successfully defended the lead in the DTM standings at Motopark Oschersleben. At a circuit on which overtaking is extremely difficult, the Swede from Audi Sport Team Abt Sportsline fought his way forward from fifth position on the grid to second place. This meant that, for the first time in his career, Ekström achieved a podium finish in a race at Oschersleben.

That it is definitely possible to overtake at the Motorpark was proved by Tom Kristensen as well. The Le Mans record victor, who had captured his first pole position in the DTM in Saturday’s Qualifying, stalled at race start and had to re-start the engine of his Audi A4 DTM, thus falling behind to 19th place. During the 44-lap race, the Audi driver managed to advance to fifth place in a remarkable run to make up ground. In the final phase, the Dane had a thrilling duel with ex-champion Bernd Schneider.

Allan McNish finished the race in sixth place, thus scoring points for the second time in a row. Martin Tomczyk, who had started from the first row, was running in front of his team-mate Mattias Ekström in the beginning but, after two thirds of the race, had to park his Audi A4 DTM due to a defect on the right front suspension.

Best driver of a 2004-spec car at Oschersleben was Frank Stippler, who finished ninth in the A4 DTM entered by Audi Sport Team Joest and missed scoring a point by merely 0.572 seconds. Rinaldo Capello, Christian Abt and Pierre Kaffer claimed places ten, twelve and 17.

Mattias Ekström (Audi Sport Team Abt Sportsline #1)
2nd place, + 3.169s
“I’m satisfied with my result. If you want to move forward from the fifth position on the grid to second place, you mustn’t make a single mistake, and the pit stops have to be perfect – we successfully met both of these challenges today. Although I was able to catch up with Gary (Paffett) on the final laps, it was too late for an attack. It’s a nice feeling to be able to go to Audi’s home race at Nuremberg as the leader of the standings.”

Tom Kristensen (Audi Sport Team Abt #5)
5th place, + 25.219s
“During the start, I stalled the engine and that was strictly my fault. Afterwards, I pushed, pushed and pushed until I was running behind Bernd Schneider, who was very clever. My team did a fantastic job, my Audi colleagues were very helpful – thanks to them! This result was alright at the end of a great week. Yet in terms of the Championship, it was a step in the wrong direction.”

Allan McNish (Audi Sport Team Abt #6)
6th place, + 26.131s
“It was a good, clean race, and I collected additional points. On the whole, I’m satisfied. Right after the start, I was able to make up a few positions, driving a very long first stint that wasn’t easy. But it enabled me to move forward. In the end, it was all about maintaining my position behind Tom and in front of Laurent (Aiello).”

Frank Stippler (Audi Sport Team Joest #19)
9th place, + 40.322s
“For me, it was a great race, even though I barely missed scoring a point. Before the start, I wasn’t sure if I’d be able to stick it out because I had some problems with my right arm. And that’s why I’m all the more satisfied now. The car was super, the team did a fantastic job, the pit stops worked out perfectly.”

Rinaldo Capello (Audi Sport Team Joest #18)
10th place, + 42.430s
“I think that, today, I would have really deserved scoring a point. I drove a very good race and was very quick. At the start, however, I was a bit unfortunate: I got off very well but then had to brake because of Tom and that cost me quite a few places. Then there was a problem during the pit stop. This meant a few handicaps too many for me.”

Christian Abt (Audi Sport Team Joest Racing #14)
12th place, + 45.175s
“Even before the race, I said that it would be impossible for us to move up to the front of the field unless we had a good grid position. The second pit stop was a bit unfortunate, yet we wouldn’t have been able to score points anyway.”

Pierre Kaffer (Audi Sport Team Joest Racing #15)
17th place, + 51.541s
“That was a tough race today. All the way through to the end, I drove at the very limit. In the beginning, I got stuck in traffic for a while, shortly before the end of the race, I briefly slid off the track behind Alesi, which cost me a few places. Actually, it was a good race, it’s just that the position wasn’t right.”

Martin Tomczyk (Audi Sport Team Abt Sportsline #2)
Retired (suspension)
“Of course it’s disappointing if you have to retire from a race due to a damaged suspension. We need to analyse the cause of the problem. In the beginning, things weren’t going quite the way I’d imagined but our strategy was good. I think a satisfactory result would have been possible.”

Hans-Jürgen Abt (Team Director Audi Sport Team Abt Sportsline): “Basically, we lost all our chances as early as at the start. Considering this, we can be very satisfied to be going home as the leaders of the standings. Yet again, we saw a strong team performance. And ‘Eki’ drove another fantastic race.”

Ralf Jüttner (Technical Director Audi Sport Team Joest): “Unfortunately, there are no points awarded for ninth place. Today, we just couldn’t have done any better, our cars from last year were not quick enough. That’s little reward for lots of work.”

Dr Wolfgang Ullrich (Head of Audi Motorsport): “At the start, we lost everything we had achieved in Qualifying. Still, we made the best of that. Everyone saw that we had the quickest cars. The team did a super job and had the right strategy for a race track on which overtaking is difficult. Considering this, the result can be seen as a perfect example of successful damage control.”