{{ activeItem() }}
Twitter
07/16/20
Good luck to the Audi teams this week: 🇺🇸 @IMSA WeatherTech SportsCar Championship &amp; Michelin Pilot Challenge at… https://t.co/cUAb0Pb5mR
07/16/20
“12 races in 23 days is a very big challenge” – @ReneRastRacing, who, together with @RFrijns and @nico_mueller, wil… https://t.co/UmXcGLeEnQ
07/15/20
[1/3] Belgian Audi Club Team WRT Audi R8 LMS in 2020: @GTWorldChEu Endurance #31 @M_Bortolotti 🇮🇹, Rolf Ineichen🇨🇭… https://t.co/sYOwDkXylK
07/15/20
NEW on https://t.co/OQuS3VLVKJ: Historic race marathon for @ReneRastRacing, @RFrijns and @nico_mueller &gt;&gt;… https://t.co/UUcmESi2ee
Audi Sport on Twitter
{{ activeItem() }}
Facebook
06/30/20
10 races with thrills, spills, banter and more: Looking back on the first season of the RCCO #RaceHome charity racing series with our DTM factory drivers competing for a good cause. #RaceHome #AudiTogether #etron #StayHome #PerformanceIsAnAttitude #RaceAtHome
06/29/20
From the virtual RCCO #RaceHome season finale, to picking up his new ride and racing at the Green Hell – a fun week for Nico Mueller in his latest #DriversDiary. >> audi.com/DTM >> audi.com/GT3 #RaceHome #AudiTogether #etron #StayHome #PerformanceIsAnAttitude #RaceAtHome -------------------- Audi RS 6 Avant: Combined fuel consumption in l/100 km: 11,7 (20.1) – 11,5 (20.5); combined CO2 emissions in g/km: 268 (431.3) – 263 (423.3); Information on fuel consumption and CO2 emissions as well as efficiency classes in ranges depending on the tires and alloy wheel rims used. // www.audi.com/dat
06/25/20
“That was the car I really loved to drive. I felt really confident in the new A4.” Together with Mattias Ekström, we’re looking back on the era of the Audi A4 DTM – the car that scored 5 DTM drivers’ titles for us. >> audi.com/DTM #PerformanceIsAnAttitude #AudiTogether
06/24/20
The first season of the RCCO #RaceHome charity racing series is in the books. Check out our race highlights and broadcast from WeatherTech Raceway Laguna Seca: >> bit.ly/2Vb03ww #RaceHome #AudiTogether #etron #StayHome #PerformanceIsAnAttitude #RaceAtHome
Audi Sport on Facebook 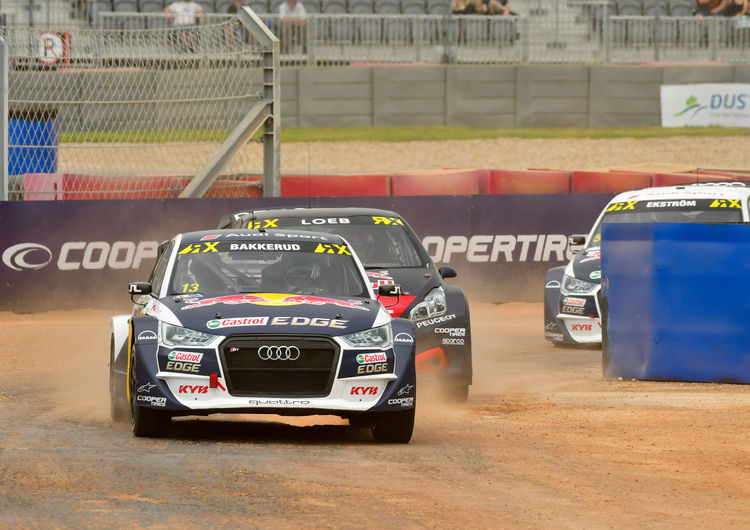 Podium on US debut: during the first outing for the FIA World Rallycross Championship (World RX) in the USA, EKS Audi Sport scored its seventh top 3 result of the season. With temperatures over 30 degrees Celsius in Austin (Texas), both drivers in the Audi S1 EKS RX quattro reached the final for the best six. The Norwegian Andreas Bakkerud took third overall while team mate Mattias Ekström finished the final in fifth place after contact with an opponent.

Both EKS Audi Sport drivers had made their way into the final with strong performances in the preliminary races: team owner Mattias Ekström held second in the intermediate standings after the first day, and won third qualifying as well as the semi-final on Sunday. With consistently good times in the qualifying sessions and a third place in the semi-final, Andreas Bakkerud also made the final. In the decisive race for the best six, the Norwegian drove a flawless race in the hot and humid temperatures of over 30 degrees to finish third behind the two Volkswagen drivers Johan Kristoffersson and Petter Solberg.

“I’m delighted about the podium because the weekend was really hard. I started in the difficult outside lane in all the qualifyings and we did our best together with EKS Audi Sport,” said Bakkerud. “Unfortunately here we were unable to beat Volkswagen. But it’s great to compete against the world’s best drivers. Congratulations to Johan Kristoffersson, who won the World Championship title here with races to spare. I’m looking forward to the next race in Buxtehude where I’ll continue to fight with Mattias (Ekström), Petter Solberg and Sébastien Loeb for the World Championship runner-up title.”

Mattias Ekström was not totally satisfied: after his victory in the semi-finale, the Swede started the decisive race from the front row, lost valuable seconds after a touch from Timmy Hansen and crossed the finish line in sixth place. After Hansen was given a time penalty, Ekström moved up to fifth place. “I’m definitely disappointed that I couldn’t get on the podium, we landed in the wall in a hard fought final and didn’t score many points,” said Ekström, who is still defending second place in the World Championship.

After the trip to the US, Audi travels in second place in the teams’ classification to Germany, where in only two weeks (October 13 – 14) the eleventh and penultimate round of the season is held at the Estering near Hamburg.