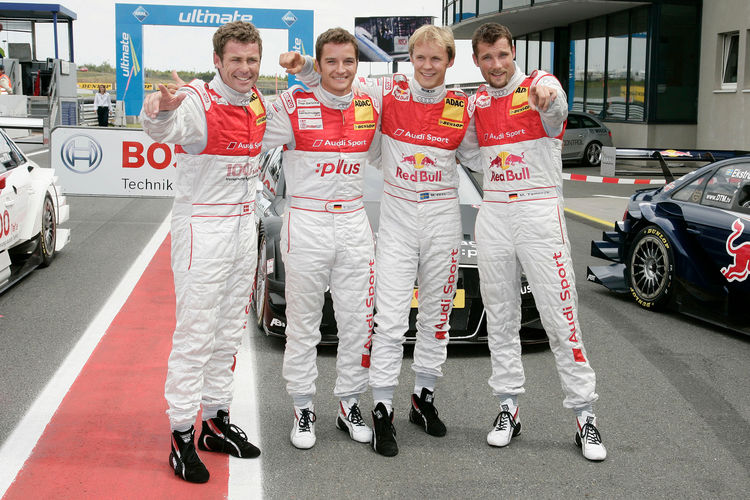 With an impressive showing in qualifying Audi achieved a perfect starting base for the fifth round of the DTM at the Motorsport Arena Oschersleben. Five Audi A4 DTM cars will start from the top five grid positions to the race on Sunday (starting at 1:45 pm – local time – live on “Das Erste”). The Dane Tom Kristensen (42) confirmed his nickname “Mister Oschersleben” yet again.

The eight-time Le Mans winner who contests his last DTM season in 2009 emphasized the fact that he gets along with the 3.696-kilometer circuit in the “Börde” flatlands near Magdeburg particularly well by posting a surprising fastest time. His fifth DTM run at Oschersleben again sees Kristensen start to the race from the front row – and from the pole position for as much as the third time.

“Oschersleben is a fantastic track for a driver, which simply suits the DTM cars really well,” explains the Dane after clinching his eighth pole position in the DTM. “I was always fast here. The work of my team today was super. I’m hoping to manage a good start tomorrow and to drive in front. I want to win here.”

Kristensen had driven the fastest lap as early as in free practice in the morning. In qualifying in the afternoon he was then in a class by himself: With his fastest time of 1m 21.352s, he outperformed last year’s winner Timo Scheider by 314 thousandths of a second and the fastest Mercedes even by as much as 0.897 seconds – a world of difference in the DTM.

Like last year, title defender Timo Scheider will start to the race from the front row alongside Tom Kristensen. Martin Tomczyk and Mattias Ekström share the second row. In the fight for the pole position, the four drivers of Audi Sport Team Abt Sportsline were amongst themselves in the crucial fourth qualifying segment. Oliver Jarvis, Alexandre Prémat and Mike Rockenfeller on positions five, seven and eight completed the strong Audi team performance in their year-old cars. Just one Mercedes driver managed the leap into the top eight.

“This was a great team performance,” praised Head of Audi Motorsport Dr. Wolfgang Ullrich. “Seven cars in the top eight show that we’re in a strong position here – and, no doubt, not just because we’ve got a weight advantage. In the DTM the field is always close and such a result first needs to be put into action. After the fantastic qualifying we want to show a strong race tomorrow, take home as many points as possible and clinch Audi’s 50th win in the DTM.”

The prerequisites for this are optimal: The DTM last saw seven vehicles from one manufacturer start from the four front rows of the grid in the 2007 season at the EuroSpeedway Lausitz.

For Audi, this was the seventh consecutive pole position in the DTM and the fifth at Oschersleben in factory-fielded runs. For as much as the fourth time, the first row on the grid in “Magdeburger Börde” flatlands belongs strictly to Audi.