Audi dominates at Zandvoort as well 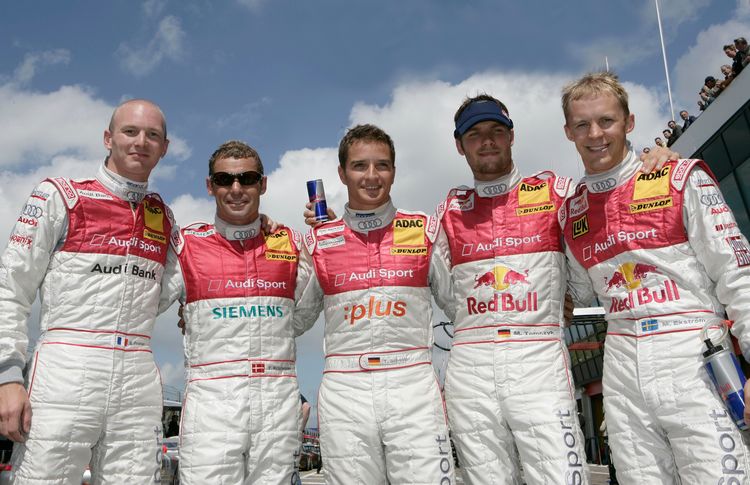 For the second time in a row, Audi has dominated the qualifying in the DTM. Just like a fortnight ago at Mugello (Italy), five Audi drivers will be starting from the top five grid positions at Zandvoort (the Netherlands) as well. The pole position on the dune circuit near Amsterdam was secured by the German Timo Scheider (Audi Sport Team Abt Sportsline). DTM leader Mattias Ekström will start from the front row alongside his teammate at 1 p.m. (local time) on Sunday, thus having the best prerequisites for a further expansion of his advantage in the overall standings.

Straight from the beginning, the Audi A4 DTM was in a class of its own on the 4.307-kilometre circuit at Zandvoort. After the Audi drivers had already dominated the two tests on Friday, they set the pace as well on Saturday. Timo Scheider managed clocking the best time in all practice sessions – a feat that is seldom achieved in the fiercely competitive DTM.

That the Zandvoort circuit obviously suits Scheider particularly well he had previously demonstrated back in 2003 when he clinched his first pole position in the DTM there. Now – four years later – he captured his second pole and his first as an Audi factory driver.

An impressive performance was yet again shown by Alexandre Prémat as well: The Frenchman in last year’s A4 of Audi Sport Team Phoenix was the only driver to penetrate the line-up of the 2007-spec cars, pushing himself between Martin Tomczyk and Tom Kristensen on position four. The quickest five Audi drivers were merely separated from each other by 262 thousandths of a second.

Mike Rockenfeller was another driver to again manage the leap into the last qualifying segment of the eight front runners. With Lucas Luhr on position ten, both drivers of Audi Sport Team Rosberg made it into the top ten for the first time this season. Claiming positions eleven and twelve, Christian Abt and Markus Winkelhock completed what was another impressive qualifying performance of the Audi squad.

Vanina Ickx, who lost control of her vehicle in a fast right-hand turn and rolled over in the gravel trap, was fortunate, nevertheless, as she sustained no injuries in the incident – proof, yet again, of the good passive safety of the Audi A4 DTM. However, as the car can not be repaired at the venue Vanina Ickx will not contest the race on Sunday.

The race at Zandvoort will start one hour earlier than usual, i.e. at 1 p.m. (local time). ARD will broadcast live on “Das Erste” from the Netherlands starting at 12:45.

Dr Wolfgang Ullrich (Head of Audi Motorsport): “Our qualifying performance was very good. Six Audi cars in the top eight, that’s an excellent result. You almost couldn’t wish for more. Now we all need to concentrate on turning this into a really good race result tomorrow.”

Timo Scheider (Gebrauchtwagen:plus/Top Service Audi A4 DTM #8)
1st place, 1m 32.823s
“Being in first place in all practice sessions, from the first test all the way to qualifying, is definitely exceptional – I don’t know if this has happened before this year. And what’s more, here at Zandvoort, on a circuit where I still have a score to settle after my pole position in 2003 and leading the race at that time. I truly relish this moment and hope to be able to follow up tomorrow with the leading laps that were missing in 2003! My thanks to the Abt boys for the perfect car. Now we need to keep a cool head.”

Mattias Ekström (Red Bull Audi A4 DTM #3)
2nd place, 1m 32.870s
“The qualifying was good. It was a hot battle. In the second session I was at the limit because the car wasn’t totally perfect. Then my engineer made a few minor changes. On the last trial the car was a dream. Then I made a small mistake in the middle sector, otherwise we could have been all the way at the front. I’m satisfied being second, because it was important to make it onto the first row. A big compliment to the team that has been good all weekend.”

Martin Tomczyk (Red Bull Audi A4 DTM #4)
3rd place, 1m 32.903s
“We’re absolutely happy with the first five grid positions for Audi. We had the same constellation before, at Mugello – tomorrow we want to prove that we can achieve a strong final result from this starting base as well. Personally, I’m satisfied with my third place. Perhaps I could have been even a bit faster, but as long as I’ve only got teammates in front of me, I don’t mind the result.”

Alexandre Prémat (Audi Bank Audi A4 DTM #17)
4th place, 1m 33.036s
“I’m very satisfied because I was quick on all of my trials. I was even able to fight for the pole position. Unfortunately, I made a small mistake on my second outing – this can happen when you’re driving at the limit. Nevertheless, I’m happy about my position on the second row of the grid. Now I want to help the 2007-spec cars in their fight for the Championship as best I can.”

Tom Kristensen (Siemens Audi A4 DTM #7)
5th place, 1m 33.085s
“It was incredibly tight. That will be another great result for Audi. Of course, personally, I’d rather be a bit further towards the front. My first trial was perfect. Although I was quicker in individual sectors later I didn’t manage another better lap time anymore.”

Mike Rockenfeller (S line Audi A4 DTM #11)
8th place, 1m 33.617s
“Being eighth like at Mugello isn’t bad, basically, but after third place in free practice this morning I’d been hoping for a better result. Now we need to try and make the best of it in the race with a good strategy and good stops. I’m hoping that, like at Mugello, the boys will manage this and I’ll be able to move further towards the front. Points are possible in any event.”

Lucas Luhr (Philips Audi A4 DTM #12)
10th place, 1m 33.691s
“I’m not unhappy, even though I would have liked finishing among the top eight, but I was lacking one and a half tenth. I suppose that was my own fault as I spun in the fast turn 5. After yesterday’s results things are clearly looking up today.”

Christian Abt (Playboy Audi A4 DTM #16)
11th place, 1m 33.746s
“Luck was not on my side today. In the last sector I made a small mistake, which is why I didn’t manage achieving a result among the top eight. Too bad.”

Markus Winkelhock (Audi A4 DTM #20)
12th place, 1m 33.849s
“The result is okay. Up to the red flag I was running in ninth place because I was able to make pretty good use of the tyres. In the second part the first sector was very good, but in the second sector I made a mistake that cost me two or three tenths. A better result would have been possible, but in a 2005-spec car there’s no reason to be unhappy with twelfth place.”

Vanina Ickx (Audi A4 DTM #21)
20th place, 1m 35.723s
“We’d already lost a lot of time in practice and had to make up for what we missed on Friday. We had to risk quite a bit and that means that an accident can happen. I’m particularly sorry for the team that already had to do a lot of work the day before.”

Hans-Jürgen Abt (Team Director Audi Sport Team Abt Sportsline): “Things went sensationally for us. That’s a huge motivation for Sunday. The car is very good. Now we need to continue working hard for the race in order to achieve a respective result. Clearly, that’s what we’ve got to do! ”

Ernst Moser (Team Director Audi Sport Team Phoenix): “With the result achieved by Alex (Prémat) we’re very satisfied. With Christian (Abt), a better result could have been possible, including a place among the top eight. Unfortunately, he lost two tenths in the final corner. Otherwise, we might have had both cars make it into the last qualifying round, which we’d been shooting for as well.”

Arno Zensen (Team Director Audi Sport Team Rosberg): “We managed getting both cars into the top ten – albeit not on the positions I’d been expecting. But at Mugello quite a bit was possible from position eight as well, and we were running in third place at some point in time. So there are definitely possibilities for us on Sunday.”

The starting grid at Zandvoort