Audi defends lead in the DTM 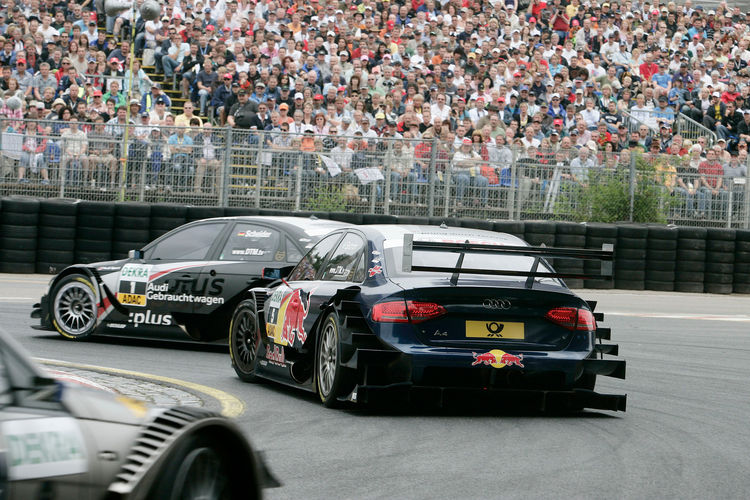 With a fourth-place finish at the Norisring Audi driver Timo Scheider defended his lead of the DTM standings. His teammate Mattias Ekström clinched a podium result for Audi in one of the most thrilling races in DTM history held in front of 132,000 spectators (throughout the weekend).

Timo Scheider was the tragic hero of the race. From the pole position, the reigning DTM Champion was setting the pace during the first two thirds of the race with his Audi A4 DTM despite the fact that he had started the race suffering from a high fever. In a dramatic final phase, however, he came under increasingly heavy pressure from the two Mercedes drivers behind him, Bruno Spengler and Jamie Green.

Up to the 75th of the 80 laps Scheider defended his lead. The Audi driver was able to counter a first overtaking maneuver by Bruno Spengler one lap later. On the second last lap, though, Jamie Green squeezed past the leader of the standings and slightly touched him in the process. Due to this attack Scheider lost so much momentum in the chicane that he dropped behind Spengler and Ekström.

“Of course I’d have wished surviving these last two laps at the front of the field too,” Scheider said after the race. “In the final third of the race, though, I had major problems with the handling at the rear. I’m glad the race is over and that I’m still at the top of the standings. The first thing I’ll do now is hit the bed.”

Mattias Ekström, as well, had a realistic chance of winning the Norisring race. The Swede had opted for a setup with extremely low downforce and was right on target with his choice. He managed overtaking Timo Scheider as early as on the starting lap. However, because the safety car’s appearance almost coincided with his overtaking maneuver Ekström let his teammate pass again after the race was re-started in order to not risk a penalty.

After the first pit stop Ekström lost a lot of time behind Gary Paffett’s Mercedes. In the final stage, though, he was able to make up a gap of about five seconds, join the front runners again and, ultimately, secure third place. “Without the time I lost behind Gary I could have won today,” the Swede was convinced. “My car was really good. In the end, I was clearly faster than the front of the field.”

The first seven vehicles crossed the finish line after 80 laps within just 3.807 seconds. “That was good advertising for touring car racing and the DTM,” said Head of Audi Motorsport Dr. Wolfgang Ullrich. “Never before were we as close to winning the Norisring race as we were today. Of course it’s too bad that we fell short of achieving this by such a narrow margin. But in the end, the small things count. Next year we’ll try again.”

With Tom Kristensen in eighth place, another driver from Audi Sport Team Abt Sportsline finished in the points. Mike Rockenfeller (Audi Sport Team Rosberg) in ninth was the best driver of a year-old A4. Martin Tomczyk, Katherine Legge and Markus Winkelhock took places eleven, twelve and 13.

After her fifth place in qualifying Katherine Legge again caused a sensation. The Briton posted the fastest race lap at 48.620 seconds which makes her the first woman in the history of the new DTM to have achieved this feat. Legge, however, gambled away her chances of scoring points by a totally bungled start that caused her to drop from fifth to 14th place.

Audi Sport Team Phoenix had to accept a total retirement. Alexandre Prémat retired on the 37th lap after body contact with Mercedes driver Paul Di Resta. His team-mate Oliver Jarvis was hit by the spinning A4 of Czech driver Tomas Kostka as early as on the starting lap.

A major effort by Audi Sport Team Rosberg’s crew of mechanics, who prepared Markus Winkelhock’s Audi A4 DTM overnight after the free-practice accident in which he was blameless, went unrewarded. The car was back on its wheels at six in the morning – but the race did not produce the points the crew had been hoping for after performing this outstanding feat.

After three of ten rounds Timo Scheider – now with a score of 17 points – continues leading the overall DTM standings. Mattias Ekström, with 14 points, ranks in fifth place. The next DTM race will be held on July 19, at Zandvoort (the Netherlands). Audi celebrated one-two-three-four victories there the last two years.