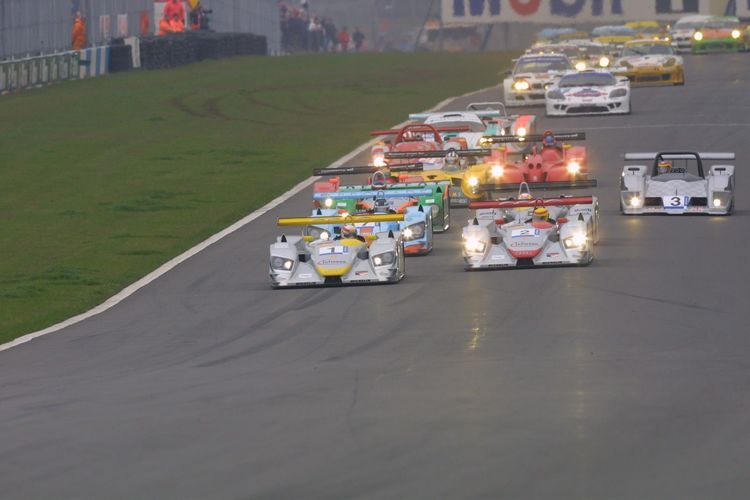 The two Infineon Audi R8 sportscars and the customer R8 of Stefan Johansson’s team were setting the pace on the challenging track of Donington from the very beginning. Pole setter Tom Kristensen led from the start, but lost his lead temporarily when he had to come in for a stop-and-go-penalty after touching a lapped car.

Frank Biela had dropped behind Stefan Johansson at the start, and it took him a while to find a way around the customer R8. He took advantage of Kristensen’s stop-and-go only for a very short period after clashing with a slower GT car which caused the right rear tyre of the Infineon Audi R8 to puncture making the #2 car lose a complete lap.

While Tom Kristensen and Rinaldo Capello went on to take an unchallenged victory, Frank Biela and Emanuele Pirro had to fight fiercly for second position with Stefan Johansson and Guy Smith. A perfect pit stop strategy decided the battle for Biela and Pirro in the closing stages of the race. Johansson/Smith, however, scored their first ALMS podium and completed the Audi success at Donington.

With his third victory in the third race of the season, Italy’s Rinaldo Capello kept his lead in the American Le Mans Series (ALMS).

Rinaldo Capello (#1): “The car was very good and Tom did a great job in the first two stints. I just brought the car home without taking any risks. With last year’s finale at Adelaide I have won four races in a row - that is really something special.”

Tom Kristensen (#1): “We have been quickest in all free practices and in qualifying. So I think, we deserved this victory. My only mishap was the stop-and-go-penalty. I accept things like that, but the drivers have to be aware of each other and understand how to behave in traffic.”

Frank Biela (#2): “Our curse could finally stop. We all have the problem to go through the traffic. What happened to me, however, was really strange. I did not try to brake into the corner on the very last moment, but passed him more or less on the straight then he turned in. The collision cost us a lot of time. For that, the second place is okay.”

Emanuele Pirro (#2): “For sure this was not one of our best races. When we lost one lap, the situation looked pretty bad. The only chance to catch second place was to save fuel and to do one less stop. At least the strategy worked.”

Stefan Johansson (#7): “Of course we are happy to be on the podium for the first time, but we are also a little bit disappointed. I thought for a moment we would be able to finish second but we misjugded the pitstops a little bit. That"s the way it goes. “

Guy Smith (#7): “It"s nice to be on the poduim and I"m very grateful that the Audi is such a good car. We were pretty good, just lost the second place on strategy. We were not far away from becoming second. “

Dr Wolfgang Ullrich, Head of Audi Sport: “It was very tight until the end for Emanuele. We took the risk to calculate lap times which allowed him to finish the race without another pit stop. That’s how he passed the Johansson car again. The calculation was quite complicated, but it was worth the risk.”

Reinhold Joest, Team Director Audi Sport North America: “Thanks to our pit strategy we were able to bring car number two back to second position. To reach the finish line with the very last drop of fuel is a great thing. It was an interesting and challenging race.”