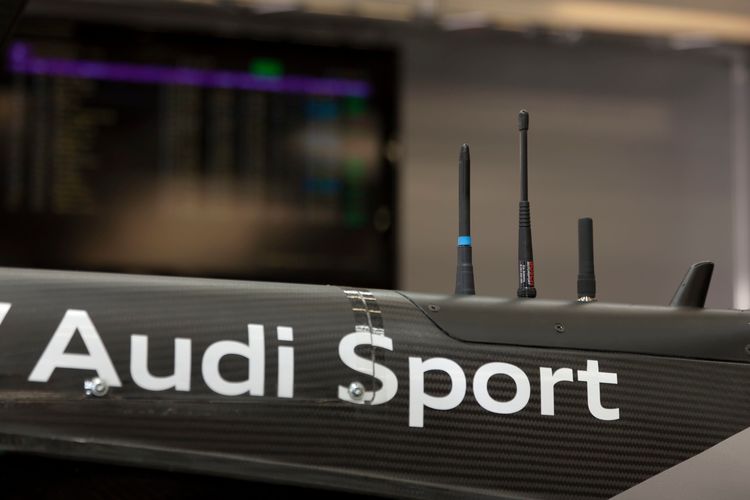 The brand with the four rings bundles all applications and developments connecting today’s and future Audi models with the internet, the owner and the infrastructure under the term “Audi connect.” Motorsport is also a pioneer in the area of connectivity solutions.

Communication between the car and pits is of great importance – especially at the 24 Hours of Le Mans. Audi connect also plays an important role in the active safety in the new Audi R18 TDI fighting for overall victory at Le Mans on June 11/12.

As early as 2001 Audi Sport developed, in cooperation with tire partner Michelin, a system that warns the driver of pressure loss in a tire. A sensor fitted to every Audi R18 TDI wheel constantly monitors the tire pressure and transmits this data to the car’s central electronic unit. If the pressure falls, a red warning light illuminates on the high-tech steering wheel. The engineers in the pits are also warned immediately. “Since the introduction of this technology, tire failures due to pressure loss and subsequent potential accidents, have been completely avoided,” says Joachim Hausner, Head of Complete Vehicle at Audi Sport.

No less than 1,005 data channels are permanently recorded on the Audi R18 TDI, monitored and transmitted to the pits by telemetry. At Le Mans, about 16 Megabytes of data are accrued every lap which are then evaluated with the help of state-of-the-art computer technology. Additionally, each time a car passes the pits high frequency “burst” data recorded during the previous lap is transmitted which helps engineers in their analysis thus guaranteeing the vehicle parameters are always correct.

Theoretically the technicians could also control the most important vehicle functions by telemetry from the pits with Audi connect. However, the Automobile Club de l’Ouest (ACO) regulations prohibit this. For this reason radio traffic between driver and pits plays an important role. Based on this data, which is studied and interpreted by data and engine engineers, the race engineer gives the driver instructions by radio. The brake balance between the front and rear axles, traction control (ASR) and the engine maps (MAP and MIX) are changed the most frequently while driving. These functions are all integrated into the steering wheel on the R18 TDI. “We don’t have to take our hands off the steering wheel while driving,” says Le Mans record winner Tom Kristensen.

“Switch to MAP 3” or “Use ASR 10” are typical instructions given to the drivers from their race engineers during the race. Every member of the crew is also connected by radio and is therefore ready in a flash should the car make an unscheduled pit stop. Audi connect is also used during pit stops: after an incorrectly fastened wheel nut cost Dindo Capello, Tom Kristensen and Allan McNish almost certain victory at Le Mans in 2007, a system that monitors the wheel gun tightening torque was developed with partner Megaline. “In this way it’s guaranteed that no car leaves the pits with the wheel nut torque too low,” confirms Joachim Hausner. Audi connect helps active safety here as well.

The organizers are also permanently connected with the Audi R18 TDI: they monitor the maximum permitted turbo boost pressure and compliance with the maximum cockpit temperature. The fans also benefit from connectivity solutions: Three LED modules fitted to the side of each car indicate which cars currently hold one of the top-three positions in each class. The identity of the driver currently sitting at the wheel is transmitted directly from the car to the electronic timing system and is visible on the monitors.

Audi goes one step further: guests of the brand have been able to view the most important telemetry data for years – and like the engineers in the pits also follow the car on a digital image of the track which shows exactly where each car is at that moment. The images from the onboard cameras are also broadcast live. For the future Audi is also working on making the data and images available via Apps for users of smartphones, iPads and internet websites – this also stands for Audi connect.