Audi comes as favourite to Zandvoort 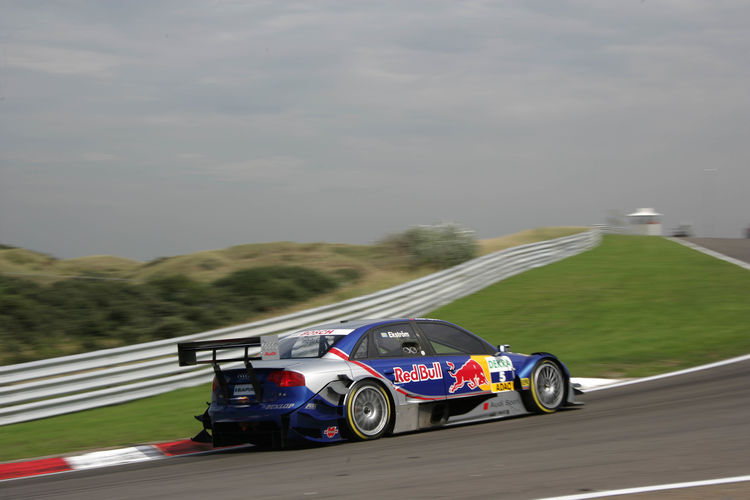 More than two million television viewers followed German TVs live broadcast on “Das Erste” of the DTM race at Mugello – a record this season. The next highlight is now on the agenda: the race at Zandvoort on the Dutch North Sea coast, to which Audi driver Mattias Ekström comes as overall leader on the last weekend in July.

The Swede has a 6.5 point lead over defending Champion Bernd Schneider (Mercedes) going into the final four races of the year. The Audi team will do everything possible on the 4.307 kilometre circuit through the dunes to strengthen its lead in the most popular international touring car race series.

The foundations are good for this: Mattias Ekström is the only driver to have won more than one DTM race to date at Zandvoort (2002 and 2004). The Audi A4 DTM also has a particularly good track record at Zandvoort with two wins from three starts (2004 and 2006). The latest generation
A4 DTM demonstrated impressively just how fast it is around fast, swooping tracks last time out at Mugello.

The majority of the Audi drivers have good memories of the race on the North Sea coast: Mattias Ekström celebrated his first DTM race win on the North Sea coast. Both Christian Abt and Timo Scheider took their maiden DTM pole positions there. Tom Kristensen won last year. Alexandre Prémat won the 2004 Formula 3 Masters, and Martin Tomczyk mounted the podium twice at Zandvoort.

Almost 80,000 fans are expected to flood through the gates and, like every year, ensure the unique Zandvoort atmosphere. Tickets for the race can be ordered by telephone by dialling +49 (0)841/9047777. Further information can be found in the Internet at www.audi-dtm.de. “Das Erste” broadcasts qualifying and the race live and in full length directly from Zandvoort.

Quotes before the race at Zandvoort

Dr Wolfgang Ullrich (Head of Audi Motorsport): “The Audi A4 DTM was the fastest car at Mugello. The circuit at Zandvoort has very similar characteristics to Mugello, which means we should be just as quick there. We want to make much more out of the race there than we did in Italy. We will do everything possible to win again at Zandvoort.”

Mattias Ekström (Red Bull Audi A4 DTM #3): “I have many fond memories of Zandvoort: We clinched the DTM title for Laurent (Aiello) there five years ago, and, at the same time, I won my very first DTM race. My victory in 2004 was particularly important on the way to the title. I’m very comfortable with my car at the moment, which is why I can hardly wait to drive at Zandvoort.”

Martin Tomczyk (Red Bull Audi A4 DTM #4): “I’m looking forward to Zandvoort; the races have always been good there in the past. I want to produce a good performance, finish in the points again and claw back some lost ground in the championship.”

Tom Kristensen (Siemens Audi A4 DTM #7): “There is absolutely no doubt that we will be strong at Zandvoort. However, we saw in Mugello that simply having the fastest car sometimes isn’t enough. Everything has to be perfect. The motivation within the team is even greater after Mugello. Every single one of us will do everything to make sure that ‘Eki’ and Martin get the points they need in the title fight.”

Timo Scheider (Gebrauchtwagen:plus/Top Service Audi A4 DTM #8): “I look forward to Zandvoort every year – it’s very special to me. I took my first pole position in the DTM there. The track through the sand dunes is very challenging from a driver’s point of view, and has a unique flair because of the passionate fans and its location on the coast. Audi’s performance at Mugello was fantastic. We all want to make much more out of it at Zandvoort.”

Mike Rockenfeller (S line Audi A4 DTM #11): “Zandvoort is a great circuit, of which I have fond memories from my days in the Carrera Cup. It’s a driver’s circuit just like Mugello. I hope that I can score another good result for Team Rosberg.”

Lucas Luhr (Philips Audi A4 DTM #12): “Zandvoort is another fantastic race track which I’ve been looking forward to. It’s almost certainly just as much fun to drive as Mugello. Audi has been very strong there over the last few years, so a good result is more than possible.”

Christian Abt (Playboy Audi A4 DTM #16): “Zandvoort is my all-time favourite race track, which I’ve been looking forward to all year. My team mate Alex Prémat also loves the circuit; he won the Formula 3 Masters there. A top team result should be possible for us there.”

Alexandre Prémat (Audi Bank Audi A4 DTM #17): “I love Zandvoort because I’ve won a lot of Formula 3 races there. My biggest victory was winning the Formula 3 Masters. I’m delighted to be returning to Holland. It’s a fantastic country. I’m convinced that we’ll be just as fast there as we were at Mugello. I will do everything possible to support the 2007 cars in the championship battle and collect as many points as possible in the process myself.”

Markus Winkelhock (Audi A4 DTM #20): “Zandvoort is a superb circuit, technically very demanding and varied: There are fast corners, slow corners, banked corners, and blind crests. Zandvoort really has a little bit of everything that makes racing so much fun.”

Vanina Ickx (Audi A4 DTM #21): “I qualified well at Zandvoort last year, but my race was too short. I really want to see the chequered flag this time.”

Hans-Jürgen Abt (Team Director Audi Sport Team Abt Sportsline): “We arrive in Zandvoort with a solid base from which to attack: Our cars are fast and light. The Mugello chapter is closed. We have a 6.5 point lead in the championship and aim, not only to increase it at Zandvoort, but also in the following races.”

Ernst Moser (Team Director Audi Sport Team Phoenix): “The circuit at Zandvoort is ideal for both of our drivers and the Audi A4 DTM. Our goal is therefore to get both cars in the top eight in qualifying and score points in the race.”

Arno Zensen (Team Director Audi Sport Team Rosberg): “As before, our aim is to finally get both drivers into the top eight in qualifying and score points with both cars in the race. Lucas Luhr’s run of bad luck must, quite simply, come to an end at some time or another. With Mike (Rockenfeller) things ran really well at Mugello. We want to repeat this performance.”

The schedule at Zandvoort

Point standings after 6 of 10 rounds