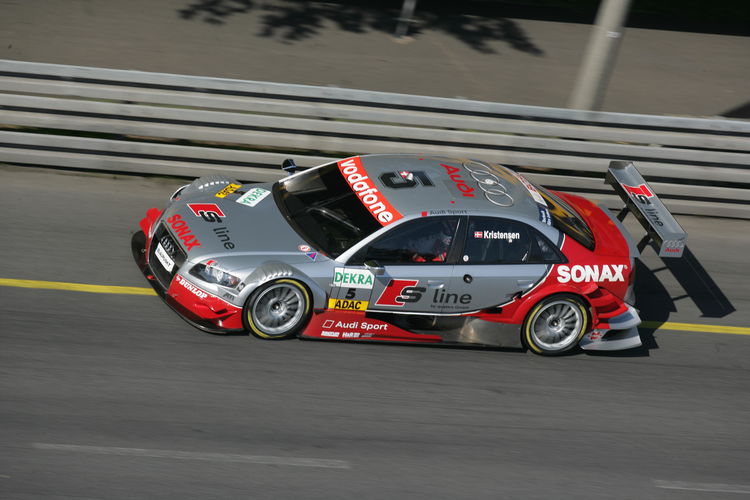 Audi fans at the Norisring broke out in loud cheers: Tom Kristensen in the Audi A4 DTM entered by Audi Sport Team Abt Sportsline was the quickest in the Super pole qualifying lap on Saturday evening. The Le Mans record winner from Denmark clinched his second DTM pole position in a row. Leader of the standings Mattias Ekström was merely 0.096 seconds slower on his lap and will start to Audi’s “home game” from the third row on Sunday.

At high summer temperatures of nearly 30 degrees in the shade the single timed laps of the top ten in the qualifying could have hardly been more thrilling. In the end, the quickest five were within one hundredth of a second. With an extremely small lead of 0.009 seconds, Tom Kristensen captured the top position on the starting grid.

The quickest driver of a car from last year entered by Audi Sport Team Joest was Frank Stippler, who had finished in 13th place, barely missing the Super pole by as little as 0.163 seconds.

Due to German Television´s broadcast of the Tour de France the DTM race at the Norisring will not be held until late Sunday afternoon. ARD will start to broadcast live at approximately 5:30 p.m. (local time). A total of 72 laps are on the agenda – particularly on account of the expected hot temperatures , the race will subject the drivers and vehicles to an unusually tough test.

Tom Kristensen (Audi Sport Team Abt #5)
1st place, Super pole, 48.446s
“We made a few more changes to my A4 DTM between yesterday and today, and they worked out perfectly. Things were going well for me as early as in the qualifying practice, and in the Super pole simply everything ‘fit’. When I saw that Mattias had made a small mistake braking in the first corner, I held myself back a little and braked two metres earlier. Now I’m happy that the many Audi fans here can see an A4 on the pole position. And tomorrow I want to stay in front longer than I did at Oschersleben...”

Mattias Ekström (Audi Sport Team Abt Sportsline #1)
5th place Super pole, 48.542s
“I made a small mistake in the first sector, but then gave everything. Finishing fifth and missing pole by merely one tenth of a second shows how tight the DTM field is. Today every hundredth counted. Still: an Audi is on pole – and that’s always a good thing.”

Allan McNish (Audi Sport Team Abt #6)
12th place, 48.861s
“Overnight, we made some changes to the car, which paid off. I’m now better able to deal with the pitfalls of the Norisring. After my first lap in the qualifying practice I was sure that I’d be able to make it into the Super pole, but then I was slowed down by another car. On this circuit, though, a lot is possible, even when you start from twelfth place.”

Frank Stippler (Audi Sport Team Joest #19)
13th place, Super pole, 48.880s
“My lap was good, but not perfect. And a perfect lap, with one hundred percent, is exactly what you need to make it into the Super pole at the Norisring. During my first attempt we tried something, which unfortunately didn’t work out quite the way we’d expected. That’s why the pressure was particularly high during my second outing. Considering this, I’m quite satisfied.”

Martin Tomczyk (Audi Sport Team Abt Sportsline #2)
14th place, 48.968s
“P14 is certainly not what I’d expected. My idea had been to be among the top ten, and I didn’t manage that. That’s why I’m a bit disappointed. Nevertheless, I’m going to try and drive to the front tomorrow. Last year, I was on position 14 as well and then moved up to fifth place. Let’s see if that’ll work again this time.”

Rinaldo Capello (Audi Sport Team Joest #18)
15th place, 49.018s
“We knew that it would be difficult for us to make it into the Super pole. I think that in the race we’ll have better chances than we did today. In the qualifying session, my car felt a lot different with the two sets of tyres – once I had oversteer, then understeer. At least, I was able to repeat my time from the free practice, and now I’m looking forward to the race.”

Christian Abt (Audi Sport Team Joest Racing #14)
17th place, 49.106s
“Particularly at the Norisring things are difficult with a 2004-spec car. Although we’re quicker here than last year, we’re lacking a bit of top speed. Over the whole distance tomorrow though your physical condition comes into play as well, and that’s where I still have an ace up my sleeve.”

Pierre Kaffer (Audi Sport Team Joest Racing #15)
19th place, 50.578s
“Honestly, I had different ideas of how the qualifying would go for us after the strong performance we showed in the beginning here at the Norisring. I cannot really tell what our problem was at this time. This means that we still have a lot of work to do to analyse and evaluate all the data. My team and I are now looking ahead. On 72 laps with two pit stops a lot can happen.”

Hans-Jürgen Abt (Team Director Audi Sport Team Abt Sportsline): “Clinching pole with a lead of merely 0.009s is simply fantastic. But I wouldn’t have minded either if it had just been 0.001s – pole is pole. I’m absolutely elated and extremely happy for Tom, who confirmed his strong performance at Oschersleben yet again.”

Ralf Jüttner (Technical Director Audi Sport Team Joest): “We hadn’t expected too much for the qualifying, and that’s why we focussed our work on the race throughout the weekend. I hope that we’ll be able to benefit from this tomorrow by fighting our way into the points. At least, our starting position isn’t bad: our four cars are all lined up behind one another on the pole side.”

Dr Wolfgang Ullrich (Head of Audi Motorsport): “Having the pole position in our ‘home game’ is a very good feeling – particularly since we only had two cars in the Super pole and have always had a rather difficult time at the Norisring so far. This time it worked out: Tom managed a perfect lap, and Mattias drove a great lap as well. Now we want to show a good performance to the large turnout of Audi Fans at the Norisring tomorrow as well. But the race will be tough and, no doubt, very thrilling.”