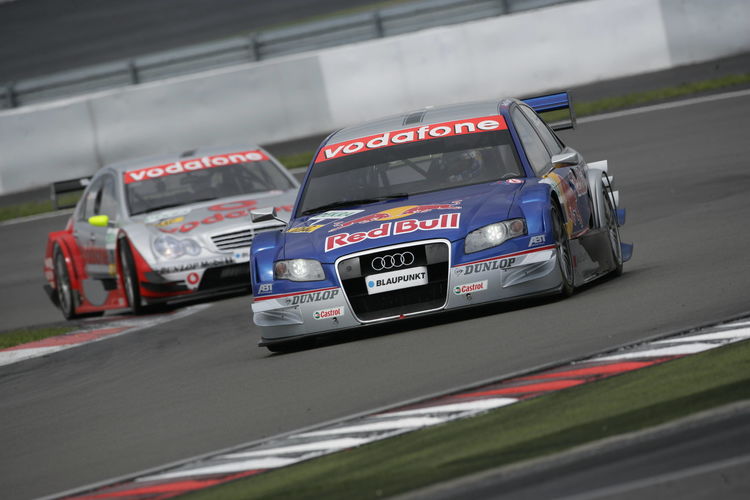 The DTM remains thrilling: with his second victory of the season, Audi driver Mattias Ekström re-captured the lead in the overall standings at the Nürburgring. After seven of eleven races, the Swede from Audi Sport Team Abt Sportsline now has a one-point advantage again over the runner-up, Gary Paffett. The Dane Tom Kristensen, who finished in second place, completed Audi’s one-two victory. Allan McNish – finishing in sixth place – scored points for the fourth time in a row, thus helping Audi to further expand its lead in the DTM manufacturers’ standings.

In typical “Eifel” weather with a mix of rain and sunshine, 112,000 spectators witnessed another thrilling DTM weekend. A heavy shower just before race start created extremely difficult conditions. In the wet starting phase, Mattias Ekström skilfully defended his third place against the vanguard chasing him and changed to wets just in time. With his second pit stop being timed just as perfectly, the Audi driver managed to reduce his 7.5-second gap to Gary Paffett to 2.6 seconds within just a few laps. When the Brit made a mistake, Ekström had pocketed his second victory of the season. Tom Kristensen, too, was able to overtake Paffett to claim second place after remarkably pushing forward from sixth place on the grid.

Martin Tomczyk was in the points as well but after his second tyre change, he drove across the white line at the pit lane exit, which earned him a drive-through penalty.

Yet again, the best driver of a car from last year was Christian Abt, who crossed the finish line in tenth place in the Audi A4 DTM entered by Audi Sport Team Joest. However - like his team-mates – Abt had lost his chance of scoring points as early as the start, conducted in flying style following a safety car lap.

Mattias Ekström (Audi Sport Team Abt Sportsline #1)
1st place
“That was a tough race. The biggest pressure I was under was at the beginning – in the rain - against Bernd Schneider. At that time, he was a bit quicker than I was. But then I managed to overtake him on slicks. Later, my tyres began degrading, and that was the reason for the duel with Mika Häkkinen. He then made a braking mistake and spun. That was good for me. I’m happy that we’ve clinched a double victory for Audi.”

Tom Kristensen (Audi Sport Team Abt #5)
2nd place, + 1.088s
“I needed this result. It’s nice to be on the podium again for a change after two pole positions in the past two races. In these conditions, the race was very difficult, it was a good thing that the race directors decided to start behind the safety car. Of course there was a lack of grip at the beginning, but we changed to slicks at the right time and this enabled me join the front runners. The second stop helped me to move further to the front of the field as well. We were quick and had the right strategy – I hope that’s a good omen for the remainder of the season.”

Allan McNish (Audi Sport Team Abt #6)
6th place, + 17.706s
“Our set-up for rain was a bit of a gamble. At the beginning of the race, this worked out quite well, I was directly behind Tom Kristensen and even managed to overtake him. But then, after the track had dried off, I was lacking grip.”

Christian Abt (Audi Sport Team Joest Racing #14)
10th place, + 28.673s
“This race was fair to middling. Unfortunately, our team was unaware of the race being started behind the safety car, otherwise I wouldn’t have finished the first lap with a 31-second gap. The fact that I crossed the finish line with a gap of barely 29 seconds, shows that my speed in the race was okay.”

Martin Tomczyk (Audi Sport Team Abt Sportsline #2)
11th place, + 32.883s
“In the beginning, things went quite well in the rain, even though I wasn’t quick enough. After changing to slicks, Allan’s (McNish) speed was higher on the first lap. After my second pit stop, I made this inexcusable mistake of crossing the white line. I’m very angry at myself.”

Frank Stippler (Audi Sport Team Joest #19)
14th place, + 56.317s
“Considering the fact that we probably made a mistake with the rear suspension set-up and that the resulting lack of stability probably made my car the slowest in the field, I’m satisfied. 14th place and the second-best 2004-spec car – under these circumstances, this is a respectable result.”

Pierre Kaffer (Audi Sport Team Joest Racing #15)
18th place + 1m 22.787s
“My ‘home game’ didn’t go the way I’d expected it to. At the start I was a bit confused. I braked in the last corner, was ready to go to my position on the grid, and suddenly there were almost no cars in sight any more . What’s more, we decided to take a risk starting on slicks, and that didn’t work out. The race, including the stops, really went well, but with the loss of time at the beginning, a better result was impossible.”

Rinaldo Capello (Audi Sport Team Joest #18)
19th place, - 1 lap
“Alright, hindsight is 20/20 vision. But – let’s face it - the decision to start on slicks, which I had taken together with my engineer, might just as well have worked. Yet as early as on the formation lap I knew this wasn’t the case. When the track dried off, I was as quick as the top three. The set-up for dry conditions worked perfectly. That consoles me a little.”

Albert Deuring (Technical Director Audi Sport Team Abt Sportsline): “I think Hans-Jürgen (Abt) can be satisfied with our performance. After his appendix surgery he watched the race from his hospital bed and certainly kept his fingers crossed for us. The choice of tyres before the start wasn’t easy. Yet wets proved to be the right choice, and then we also changed to slicks at the right time. The starting phase in the rain was difficult because our cars were out with a dry-weather set-up. That paid off later.”

Ralf Jüttner (Technical Director Audi Sport Team Joest): “Before the race we decided to have Pierre and ‘Dindo’ (Capello) start on slicks. At the time, that was a justified decision. This could have become our trump card, but then we had three more minutes of heavy rain. Unfortunately, those of us who were at the back of the grid were not informed about the race being started behind the safety car. That cost us 30 seconds and probably points as well.”

Dr Wolfgang Ullrich (Head of Audi Motorsport): “This victory is dedicated to Hans-Jürgen Abt, whom we’re wishing a speedy recovery. In the race we managed to re-gain the speed we’d had up to the qualifying practice. In the rain we had some difficulties at first, but in dry conditions things were balanced again. All in all, it was a good result for the Audi squad. We are pleased about our double victory and the fact that we’ve re-captured the lead in the drivers’ standings. It’s true that today we benefited from the mistake of a competitor. But if you want to win in the DTM, you mustn’t make any mistakes.”