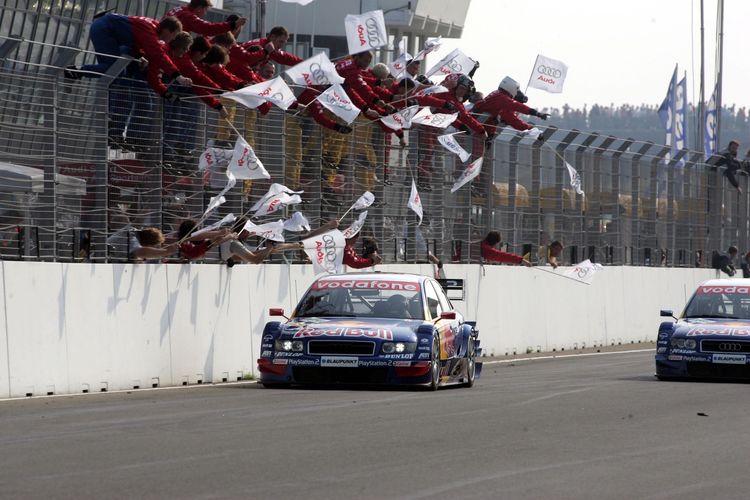 In front of a record turnout of 73,000 spectators Audi celebrated their second one-two victory in a row in the DTM. Having clinched his third victory in the season, Audi driver Mattias Ekström took another step towards winning the DTM title this year. With two races remaining, the Swede in his Audi A4 DTM now has a 13-point lead. This means that as early as in the penultimate round at Brno on 19 September he will be playing his first “matchball”. At Zandvoort, Ekström was the dominant driver: having gone into the race from pole and having pulled off a perfect start, he took the lead right away. The Swede was setting the pace at the front of the field until the race was stopped due to a crash and restarted later. Following the restart, the Audi driver mastered the decisive ten-lap sprint with a superior performance as well, clinching a start-finish victory.

Martin Tomczyk – having worked his way up from fourth to second place after the start – was the second driver to lock in Audi’s 1-2 victory at Zandvoort. Tom Kristensen finished sixth, although a spin that was no fault of his own had caused him to fall behind considerably. Emanuele Pirro – finishing seventh – scored points, too, and Frank Biela barely missed scoring a point. Christian Abt in his Audi A4 DTM was also fighting at the front of the field, but had to retire early because his fire extinguisher went off during the second pit stop.

Mattias Ekström (Audi Sport Team Abt / Audi A4 DTM #5)
1st place
“The toughest thing today was the race being stopped. A new start always harbours a new risk, but everything went perfectly. I made no mistakes, and – as always – the pit crew did a fantastic job. The only critical thing was the first lap after the second start: my tyres were dirty, that’s why things got really tight in the first turn. Today means a major step towards the Championship title, thanks – also – to Martin, whose second place-finish took valuable points away from those chasing me.“

Martin Tomczyk (Audi Sport Team Abt / Audi A4 DTM #6)
2nd place, + 0.805s
“This was a thrilling race with a happy ending. Everything was running perfectly. I had a good start and was able to work my way up quickly from fourth to second place. I was able to keep this position after the restart as well. In that respect, the last ten laps were relatively easy. The important thing was that in the first part of the race I was able to overtake Bernd Schneider right after his second pit stop. The fighting was very tight but very fair as well. All the more delighted I am about this fantastic result.”

Tom Kristensen (Audi Sport Team Abt Sportsline / Audi A4 DTM #12)
6th place, + 4.981s
“Considering the fact that I was forced into a spin, the result is quite okay. It was an action-packed day, and – basically speaking – we drove two races today. The first part of the first race was good, but in the second stint I was too hard on the tyres. After the second pit stop I was forced into a spin. To the second race I started from tenth place. My start was very good, and in the first corner I was able to overtake a few cars on the outside line. Later, Emanuele allowed me to pass. The fight with Schneider was tough. When he decided to let Paffet overtake him, he almost stopped.“

Emanuele Pirro (Audi Sport Infineon Team Joest / Audi A4 DTM #44)
7th place, + 8.022s
“This was a very hectic race. During the second start I was in a difficult situation. I didn’t want to interfere with the fight between the contenders for the title and so I had a pretty bad start, falling back from third to sixth place. Later, I let Tom overtake me and simply finished my race. I did score points, though, and that’s important for the team. In that respect, it’s been a positive weekend.“

Frank Biela (Audi Sport Infineon Team Joest / Audi A4 DTM #45)
9th place, + 15.121s
“I had some bad luck during the first pit stop. There was a problem at the right front and that cost a lot of time. Overall, I had to wrestle with oversteering today. During the restart, the brake valve didn’t work. The wheels started spinning, and I lost two places. Then I got caught behind Schneider for a long time, which caused me to lose my place behind Emanuele and Tom. Nevertheless, today I clinched my best result of the season so far.“

Christian Abt (Audi Sport Team Abt Sportsline / Audi A4 DTM #11)
retired (fire extinguisher)
“Until my retirement, I was very satisfied with my race, and the performance of the car was very good. After the first pit stop, I was probably a bit too aggressive with the tyres, that’s why I wasn’t able to keep Albers and Paffett behind me. After the second tyre change, though, I could have probably been fighting at the front again. Unfortunately, my fire extinguisher went off during the pit stop.“

Hans-Jürgen Abt (Team Director Audi Sport Team Abt Sportsline): “Today truly put everyone’s nerves to the test, and our boys kept cool. Mattias rendered another absolutely brilliant performance, and the whole squad did a super job. All I can say is, I’m simply happy.“

Ralf Jüttner (Technical Director, Audi Sport Infineon Team Joest): “This was a highly eventful race, and there were a lot of discussions. We probably had a bit of luck, but our racing speed today was quite okay, too. After a long, unsuccessful period we have finally scored two points again, and that inspires hope for the last two races.“

Dr Wolfgang Ullrich (Head of Audi Motorsport): “Aside from Peter Dumbreck’s accident it was a super race. The fact that nothing happened to him shows how safe the DTM cars are. We have achieved a great result here and have every reason to be highly satisfied. Our A4 handled Zandvoort extremely well, and we were strong here during the whole weekend. The crews did a great job, the pit stops were perfect. Our goal for this race had been to expand our lead, and we have achieved this. Now, we’re going to do everything we can – through good work – to secure the title in the last two races.“