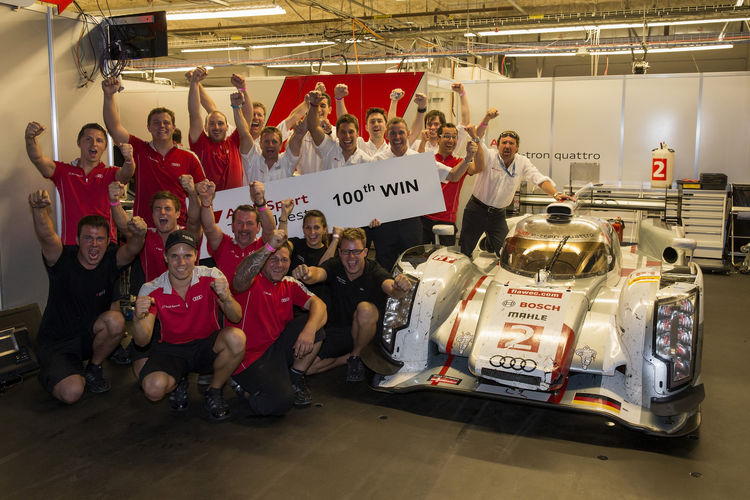 Audi achieved a historic milestone on the Texan debut of the FIA World Endurance Championship (WEC) at Austin. The squad of Head of Audi Motorsport Dr. Wolfgang Ullrich celebrated the 100th overall victory of an LMP sports car of the brand. The event has a parallel, as Audi had clinched its first-ever victory in America as well – at Sebring, on March 18, 2000. Back then and today, it was Audi Sport Team Joest that fielded the victorious race car and, back then and today, Le Mans legend Tom Kristensen was part of the successful Audi driver squad.

With an air temperature of 28 degrees centigrade and track temperature of 45 in Texas, Audi managed the next top performance, as the brand remains unbeaten in the current WEC season. Loïc Duval/Tom Kristensen/Allan McNish (F/DK/GB) celebrated their third WEC victory this year on the demanding ‘Circuit of the Americas.’ The trio had previously won the season opener at Silverstone and the Le Mans 24 Hours. The number ‘2’ Audi R18 e-tron quattro crossed the finish line with a 23.617-second advantage in front of challenger Toyota. For the brand with the four rings, this marked an amazing fifth victory in an equal number of WEC rounds this year and the sixth LMP win in succession, if the triumph at the Sebring 12 Hours in March is included in the tally.

In addition to driving skills, tactical intelligence was crucial, as – contrary to common practice at other events – not every tire change was accompanied by a driver change. As a result, the Audi drivers remaining in the cockpit immediately and consistently converted the reserves of the tires from partner Michelin into excellent lap times, as they were able to continue their race rhythm unchanged.

The successful run of car number ‘2’ was contrasted by massive misfortune of the number ‘1’ car driven by Marcel Fässler/André Lotterer/Benoît Tréluyer (CH/D/F). Right in the early phase of the six-hour race, Fässler became entangled in several tough position battles. Among others, the number ‘8’ Toyota received a warning for the action. This subsequently resulted in a whole series of setbacks. Audi was forced to change the damaged rear diffusor of the R18 e-tron quattro. The hard impact following a collision additionally caused an electrical fuse to come loose. As a result, the electrical gearshift of the transmission could not be operated at times and the problem had to be corrected during an additional stop. To top things off, a piece of loose artificial turf got stuck on the car’s underbody during an evasive off-track maneuver in the commotion. The mechanics removed it during a pit stop, as the piece of turf obstructed the flow of cooling air. Benoît Tréluyer subsequently started a recovery, drove the fastest race lap but, in the process, ran over the track boundaries once. Thus, to make matters worse, car number ‘1’ received a drive-through penalty. In the end, last year’s World Champions had to settle for third place at Austin.

In the standings, the Austin winners increased their lead. Duval/Kristensen/McNish had arrived in Texas with a 22-point advantage and are now traveling to the next round in Japan with a 33-point advantage. On October 20, the sixth of eight rounds in the FIA World Championship (WEC) will take place at Fuji.

Dr. Wolfgang Ullrich (Head of Audi Motorsport): “This was quite literally a very hot race today. It was only decided in the last 80 minutes. But we again managed to be in front. The 100th victory of an Audi LMP sports car is definitely something special. I’m happy for the whole team that has made all this possible.”

Chris Reinke (Head of LMP): “On a race track that was completely new to us we achieved a great result in a thrilling race. For Audi, it’s a very special result because it was the 100th victory in LMP racing. We celebrated the first victory in the USA as well, in 2000. What could be sweeter than achieving this milestone here?”

Ralf Jüttner (Technical Director Audi Sport Team Joest): “Sincere congratulations to Audi on its 100th LMP victory and to our victorious drivers. Audi Sport Team Joest was involved in a whole string of this success. Today, we won a particularly hot and long race. Toyota presented themselves stronger than they had the day before in qualifying. That was a nice battle. Our car number 1 suffered a lot of misfortune today. After sustaining damage, the rear bodywork had to be changed and, apparently as a consequence of a flying excursion, a fuse came loose. Thus, more than third place wasn’t possible.”

Loïc Duval (Audi R18 e-tron quattro #2): “That was a perfect weekend for us. The battle with Toyota was great fun. A wonderful result on a fantastic race track in a beautiful city that we visited for the first time. Plus we extended our lead of the standings.”

Tom Kristensen (Audi R18 e-tron quattro #2): “I’m proud of the whole squad that mastered all the challenges. Winning on the Circuit of the Americas was fantastic. The 100th LMP victory by Audi is a nice tribute to the entire team, also at home in Ingolstadt and Neckarsulm. I’m proud to be part of this team. And, after the first victory in 2000, it’s great to be on the winning team again on the 100th success.”

Allan McNish (Audi R18 e-tron quattro #2): “The result is fantastic. Our car was outstanding straight from the start. The pace was right in the race and we were very consistent. Toyota fought a nice battle with us. The decision came only after the last stop. That makes the 100th sports car victory by Audi even sweeter. I’m proud of having achieved this milestone for Audi together with Tom and Loïc.”

Marcel Fässler (Audi R18 e-tron quattro #1): “At the beginning of the race, I battled with Toyota driver Sébastien Buemi and overtook him. Then I hit traffic while lapping and a GT race car bumped into me. My car lifted and landed hard. This resulted in consequential damage that set us back and thus we finished only in third place.”

André Lotterer (Audi R18 e-tron quattro #1): “Congratulations to car number 2 and to Audi on winning here in America. We had an absolutely fast car, but too much happened today. We’ve got to settle for third place. But in Japan we’re going to attack again.”

Benoît Tréluyer (Audi R18 e-tron quattro #1): “Unfortunately, our race was off to a difficult start with the tussle and the consequences. We had a very fast car but were lacking racing fortune. Congratulations to Audi on winning with our sister car. Next time, we want to be better again.”