Audi celebrates 1-2-3-4 victory at the Nürburgring 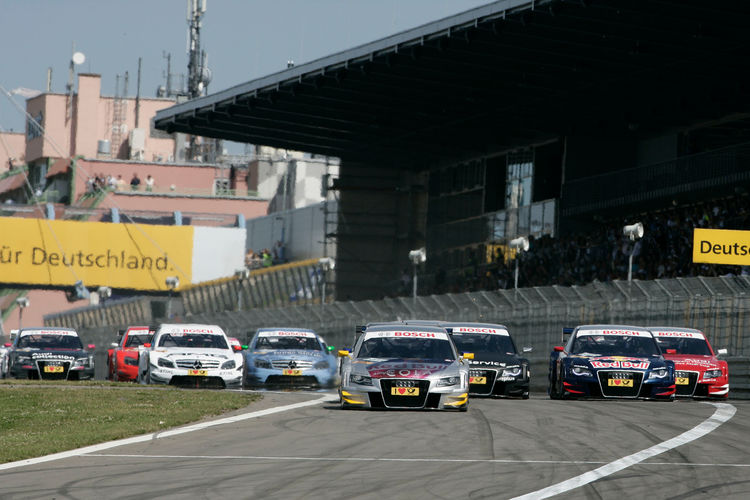 By scoring an impressive 1-2-3-4 win at the Nürburgring, Audi re-captured the lead in the DTM at the beginning of the second half of the season. With title defender Timo Scheider (35 points) and Mattias Ekström (34 points), as many as two Audi drivers are ranking at the top of the standings after six of ten rounds.

The dominating man at the Nürburgring, however, was Martin Tomczyk: The 27-year-old German was in a class by himself throughout the whole weekend. After posting the fastest times in free practice, qualifying and the warm-up, Tomczyk set the pace from the outset in the race as well. With a commanding and flawless drive, he repeated his Nürburgring victory from the year 2007. In total, this was Tomzcyk’s fourth exploit at a DTM race, enabling him to advance to fifth place in the standings.

“Everything worked out perfectly here straight from the start,” he said. “The pace was right throughout the whole weekend. It was a nice, rather calm race for me – almost like at my victory in 2007 – simply perfect. I want to thank Audi and the Abt team for this fantastic car.”

Audi’s 1-2-3-4 win was perfected by Timo Scheider and Mattias Ekström as well as Markus Winkelhock as the best driver of a year-old car. Title defender Timo Scheider finishing the race as the runner-up re-captured the lead of the standings. After his fifth consecutive podium finish, Mattias Ekström is just one point behind his teammate and five points ahead of Gary Paffett (Mercedes).

Ekström collided with Mercedes driver Bruno Spengler on the starting lap and damaged the front of his Audi A4 DTM in the process. Despite the damage he was able afterwards to drive almost the same lap times as his two team-mates in front of him. “After the collision with Bruno (Spengler), my car was a little slower on the straights, but except for that it was okay,” said the Swede. “That was not intentional. I was completely caught by surprise about Bruno braking so early. I’m happy that I was able to continue the race and still finish in third place.”

Right at the beginning of the race and after the first pit stop, Ekström also fought captivating duels with Timo Scheider, which the reigning champion managed to decide in his favor each time. “Of course I’m happy to have re-captured the lead of the standings,” said Scheider. “The duel with Mattias (Ekström) was fair and okay. We’re both fighting for the championship. That means you use your elbows – of course in the case of a teammate not quite as heavily as with other rivals.”

The three Audi A4 DTM cars of Audi Sport Team Abt Sportsline drove a lonely race in front of 86,000 spectators (throughout the weekend) at the front of the field and thus underscored Audi’s commanding performance at the Nürburgring, which was completed by Markus Winkelhock’s fourth place in the year-old A4 fielded by Audi Sport Team Rosberg.

“That was a really nice quattro victory – albeit without quattro drive – and a superb team performance,” said Head of Audi Motorsport Dr. Wolfgang Ullrich. “We were strong throughout the weekend here and now have the 1-2 lead in the championship. That’s a good base for the second half which started here at the Nürburgring. Everyone did a great job. And I’m also very happy that Martin Tomczyk made such an impressive comeback.”

For the other five Audi “factory” drivers, the Nürburgring race was less fortunate. Katherine Legge had to park her Audi A4 DTM after a collision with Gary Paffett in the commotion in the first turn. Tom Kristensen was “turned around” by a rival on the first lap and retired after 13 laps because his car was too heavily damaged on the left-hand side. Mike Rockenfeller, as well, was hit on the starting lap and in the process lost all chances of scoring further points. Oliver Jarvis and Alexandre Prémat (both Audi Sport Team Phoenix) were forced to retire after a team-internal collision on lap seven.

After a three-week break, the DTM will visit the circuit at Brands Hatch in Great Britain on September 6.