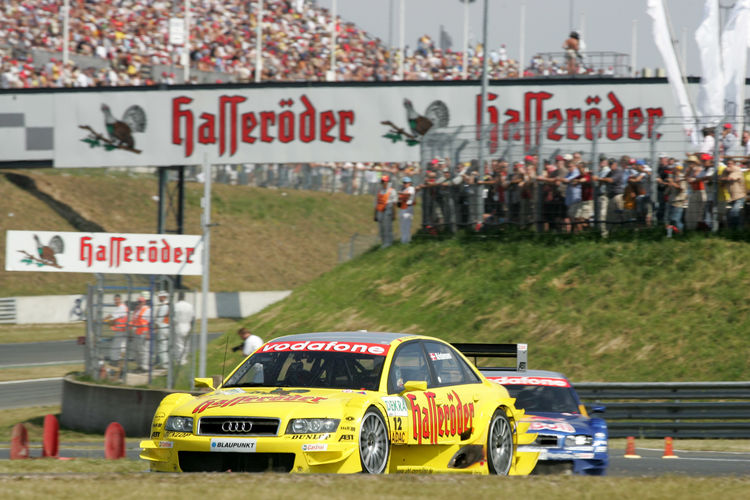 Tom Kristensen and Martin Tomczyk clinched a superior one-two victory for Audi in blazing heat at the DTM’s seventh round at the MOTOPARK Oschersleben. At the same time, Audi driver Mattias Ekström – finishing the race in fifth place – expanded his lead in the overall DTM standings to nine points. Right after the start, Martin Tomczyk, the quickest driver in the qualifying session, had taken the lead ahead of team-mate Tom Kristensen. Yet the crucial decision favouring the six-time winner of Le Mans was taken in the pit lane: Kristensen came in for his second pit stop two laps earlier than Tomczyk, thus clinching his first ever DTM victory. Christian Abt, who finished ninth, barely missed scoring a point. Frank Biela and Emanuele Pirro finished the hot battle in 13th and 15th place respectively.

Tom Kristensen (Audi Sport Team Abt Sportsline / Audi A4 DTM #12)
1st place
“For me, the DTM is the toughest racing series in the world, and this makes me even happier about today’s victory. I didn’t have a single minute to relax, because Martin was ’larger than life’ in my rear view mirror throughout the whole second half of the race. I want to thank Audi and my pit crew, who have made this exploit possible. It was pretty hot inside the cockpit. But when you’re fighting for victory, you quickly forget that.“

Martin Tomczyk (Audi Sport Team Abt / Audi A4 DTM #6)
2nd place, + 2.696s.
“My congratulations to Tom on his first victory. Of course I would have loved to overtake him today as well, but my happiness about the best result in my DTM career so far is more important than such thoughts. Tom and I were clocking identical times during the whole 42 laps, so the race had to be decided in the pit lane. Third place at Estoril, second place here at Oschersleben – and there are still a few races to go...“

Mattias Ekström (Audi Sport Team Abt / Audi A4 DTM #5)
5th place + 13.242s
“This was was a very tough race, to be sure. I have every reason to be satisfied with my fifth place and am delighted about the one-two victory of my team-mates. What happened in the first lap was exactly what I’d expected. After the scuffle with Schneider, something was bent on my car. I felt some vibrations, and my A4 was understeering as well. Particularly in the final laps, the car was very difficult to drive. Still, I believe it was the right decision to attack immediately.“

Christian Abt (Audi Sport Team Abt Sportsline / Audi A4 DTM #11)
9th place, + 31.360s
“It’s a pity I came so close to scoring points and then missed. I could have probably outrun the cars in front of me by one second in each lap, but overtaking was simply impossible. I didn’t want to force the issue either in order to – finally – achieve an exploit again.“

Frank Biela (Audi Sport Infineon Team Joest / Audi A4 DTM #45)
13th place, + 56.183s
“I stayed away from the pushing and shoving right after start, where a lot of dust was kicked up again. I fell back by one place from the starting order, but for me it was important to finish the race. I think we can learn a lesson from this in terms of how the car and the tyres are performing over the whole distance. The second set of tyres was okay, but with the first and third set, my A4 was oversteering.“

Emanuele Pirro (Audi Sport Infineon Team Joest / Audi A4 DTM #44)
15th place, + 1m 08.730s
“The race was extremely rough. My start was really good, but then I was hit from behind and fell back to the penultimate place. Then there was an incident in the pit lane that cost me additional time. What’s more, there was an extremely large amount of dirt in my cockpit, so I could hardly see anything. During the second pit stop, there were problems as well. What we definitely need now is a little luck – finally – because the car was very good in the race.“

Hans-Jürgen Abt (Team Director Audi Sport Team Abt Sportsline): “My boys can often be heard singing the tune, ’There’s only one Team Abt Sportsline’. Today, they’ve shown once again what that means: perfect pit stops, a one-two victory, and all four cars among the top ten. I’m proud of ourselves having achieved this exploit with and for Audi. ‘Well done’ to both Tom and Martin – and to Mattias, too, who put on a fantastic fight, now having locked in his position as a ‘hot’ candidate for the title.“

Ralf Jüttner (Technical Director Audi Sport Infineon Team Joest): “I’m happy for Audi, but highly disappointed about our result. Basically speaking, the race was finished for us right after start, once again. Emanuele had a super start, but was touched by another car right in the second corner. Then there were incidents during both pit stops that cost us additional time. Frank drove a respectable race, but starting from 15th place, he simply had no chance of scoring a better result than he did.“

Dr Wolfgang Ullrich (Head of Audi Motorsport): “This was a truly fantastic race. Tom and Martin set the pace, proving – once more – how good the Audi A4 DTM is. Mattias has shown yet again that he’s capable of achieving a great result even from a less favourable starting position and has scored valuable points. The whole squad can be proud of these exploits, and I’m highly satisfied.“