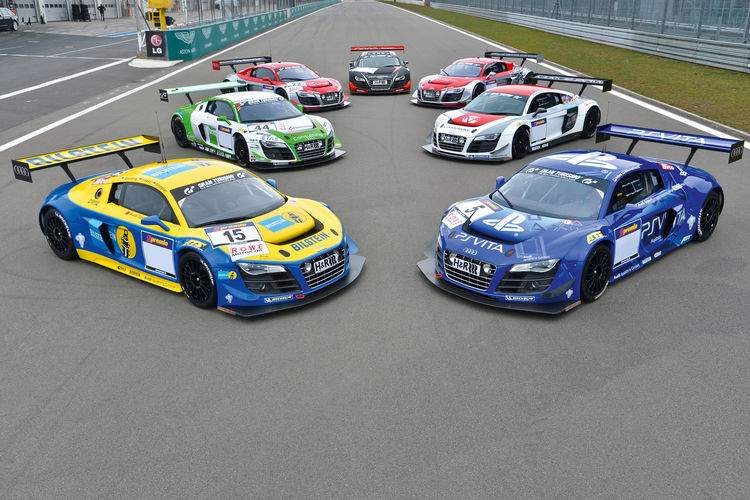 Audi is contesting three 24-hour races as factory commitments within the space of ten weeks this year – at the Nürburgring and at Spa with the R8 LMS ultra GT3 sports car and at Le Mans with the R18 LMP sports car. The classic Eifel event on May 19/20 that will be held for the 40th time and at which seven Audi R8 LMS ultra cars meet with strong competition marks the beginning of this marathon.

Audi is starting into the Nürburgring 24 Hours with a carefully orchestrated new formation. For the first time, Audi Sport Team Phoenix as the exclusive factory team is representing the brand with the four rings with two Audi R8 LMS ultra cars. In addition, four other teams with support from Audi Sport customer racing will line up on the grid. They all are relying on the latest generation of Audi’s GT3 sports car, the R8 LMS ultra that has been clearly revised for the 2012 model year. This gives Mamerow Racing, Raeder Motorsport, Speedhunters Team WRT and the Audi race experience the chance of scoring top results as well.

The Audi R8 demonstrated its capabilities at the Nürburgring 24 Hours on as many as three previous occasions. On its debut in 2009 and in the two subsequent years the race car with the V10 mid-engine was always the car to be beaten in the GT3 class. Yet in those years only more complex and higher-powered GT2 models were in contention for overall victory. This year, the SP 9 class for GT3 vehicles with no less than 30 vehicles of eight renowned brands in the field is regarded as the top category.

The changes of the 2012 season include single timed laps of the 40 top contenders in qualifying on Friday. This guarantees clearly higher equality of opportunities than in the past. Another welcome new feature that also encompasses the Spa 24 Hours on July 28 and 29: For the first time, there is a joint trophy by the organizers of both events to be won by the teams that achieve the best aggregated results in the Eifel and in the Ardennes.

From May 18 to 20, Audi Sport is tackling a double race weekend. Whereas Head of Audi Motorsport Dr. Wolfgang Ullrich coordinates the activities at the third DTM round at Brands Hatch Dieter Gass, Head of Racing Commitments at Audi Sport, is responsible in the Eifel.

The fans on location are not the only ones who can look forward to the major German endurance race. TV audiences will also have excellent opportunities to watch the action. The TV channel Sport1 will provide a total of 23:10 hours of on-air Nürburgring coverage from May 17 to 20. ARD on “Das Erste” is planning to air two live reports of 15 minutes each from the Eifel before and after the DTM race on Sunday afternoon and on Saturday will carry reports in two of its “Sportschau” programs. www.audi.tv will be broadcasting the race by live streaming as well and offering additional coverage of its own.

Dieter Gass (Head of Racing Commitments Audi Sport): “In recent years, we celebrated major successes with the Audi R8 LMS at the Nürburgring in the GT3 class. This year, the big aim is to shoot for overall victory. We’ve got a very strong line-up of teams and drivers plus an updated vehicle. The Nürburgring is even more unpredictable than Spa where we clinched overall victory last year. The weather is hard to judge and you can easily find yourself in the wrong place at the wrong moment. But we’re broadly poised with the factory team and the factory-supported customer teams.”

Werner Frowein (quattro GmbH): “The 40th running of the 24-hour race this year is very special for me. 42 years ago, at the inaugural event in 1970, I participated as a race mechanic in the team of Hans-Joachim Stuck and Clemens Schickentanz and clinched the first ever overall victory. Naturally, there’s nothing I wish for more than an overall victory of the Audi R8 LMS ultra that has won so many endurance races and champion’s titles all over the world. This great endurance classic at the Nürburgring is the only one that’s still missing.”

Romolo Liebchen (Head of Audi Sport customer racing): “This year, the GT3 class at the Nürburgring is playing an even more prominent role than before. Even the overall winners from recent years are now relying on such vehicles. Our factory-supported customers are receiving vehicles that are technically identical to those of the factory team. And they are completely integrated with the network in terms of organization, spare parts logistics, team support and information flow through to radio communications. They can profit from the information of the factory team and vice versa.”

Ernst Moser (Team Director Audi Sport Team Phoenix): “Our preparations have been completed. We did everything that was possible. Our drivers have perfectly adjusted to the new car in the VLN races. 24-hour races are our passion, and this particular one is our home round. With the new Audi R8 LMS ultra and our driver squads we’ve got every chance this time of finishing at the very top after several attempts.”

Vincent Vosse (Team Director Speedhunters Team WRT): “We’re intimately familiar with the Audi R8 but are competing with it on the Nordschleife for the first time. For our team, this is not new territory, though. Last year, many of our employees were involved in the Volkswagen factory commitment at the 24-hour race. Still, we’ve got a lot of respect for this event and the track. We know that our drivers can handle this challenge well. They’re drawing on many years of experience in professional racing and have all contested this event before.”

Peter Mamerow (Team Director Mamerow Racing): “The Nordschleife is our home and now we’re getting to know the Audi R8 LMS ultra for the first time. With our driver line-up we’ve got a good mix of experience and youth on the grid. They can all drive the same pace and get along well with each other. I’m eager to see what we can achieve this year.”

Nicki Raeder (Team Director Raeder Motorsport): “Expectations are high. After clinching class victory last year with the TT RS it’s nice to take the next step with the R8 LMS ultra. We’ve fielded GT3 models on previous occasions and started from the pole position in 2009. The drivers are one of our fortes. In addition to good team spirit and cohesion, they have the skills to handle this race very intelligently.”

Josef Haider (Sporting Director Audi race experience): “The Audi race experience is competing at the Nürburgring 24 Hours in the second year. Audi has taken the top spot in the group of automobile manufacturers by offering customers with a sporting orientation the opportunity to contest races. This race is the absolute pinnacle of the season for us. Besides the customer car we’re entering a car strictly driven by professionals. For the many loyal fans, this is a nice opportunity to meet international drivers and to experience them on this challenging track.”

Marcel Fässler, Audi R8 LMS ultra #2 (Audi Sport Team Phoenix): “I’m happy to be able to race at the Nürburgring 24 Hours again. It’s a great race track. We’ve already won a few VLN races but have not been able to take overall victory at the 24-hour race yet. I’m convinced that we’re well prepared and thus have the chance to win the 24 Hours. But as everyone knows such races are always a challenge to ‘man and material.’ You can’t afford to make any mistakes and the pace has got to be right.”

Frank Stippler, Audi R8 LMS ultra #3 (Audi Sport Team Phoenix): “I’m again extremely excited about the race coming up this year. In winter, we worked hard on the efficiency of the R8 LMS and continued to develop the car’s ultra evolution. I believe that we’ve got a good base to be in contention for overall victory after three consecutive class wins. It’s a long-cherished dream and wish of mine to win this endurance classic once. It would also be a very nice farewell gift to Werner Frowein, who has been driving this project with a lot of passion for years and will begin his well-deserved retirement at the end of the year.”

Allan Simonsen, Audi R8 LMS ultra #4 (Speedhunters Team WRT): “I’m very happy to be able to compete with Audi. Two years ago I was on podium. Now a victory would be perfect. Our driver line-up is good, the car is quick and the team is top-notch. There’s a strong brand behind us. In this race it’s crucial to minimize your pit stops. To do so, you’ve got to use your brains at the wheel.”

Thomas Mutsch, Audi R8 LMS ultra #9 (Raeder Motorsport): “We’ve got a good chance of finishing the 24-hour race among the top five with the Audi R8 this year. Obviously, the weather and a bit of fortune are important too. We’ve thoroughly prepared for this marathon. Raeder Motorsport has done a very good job and I’m confident.”

Warren Luff, Audi R8 LMS ultra #24 (Audi race experience): “It’s a nice opportunity to compete on the Nordschleife again with Audi. Last year I already drove a VLN race and the 24-hour race was my goal even then. Now I’m competing with the Audi race experience. Our chief aim is to run without any problems throughout. If we do, then a good result will be possible too.”

Marco Werner, Audi R8 LMS ultra #25 (Audi race experience): “I’m really looking forward to the Nürburgring 24 Hours because it’s my second race this year. There’s almost nothing better than driving on a challenging track like the Nürburgring and a fascinating car like the R8 LMS ultra. That’s a challenge. I’ve got a lot of ties to the Nordschleife, after all, that’s where I drove my first race.”

Christian Mamerow, Audi R8 LMS ultra #26 (Mamerow Racing): “The Nordschleife is our territory. We’ve been active in endurance racing there for many years. With Audi a totally new opportunity has materialized for us. I’m hoping that right in the first year with the R8 LMS ultra we’ll be able to demonstrate this car’s potential. Our whole squad is looking forward to this.”

The Audi teams at the 2012 Nürburgring 24 Hours