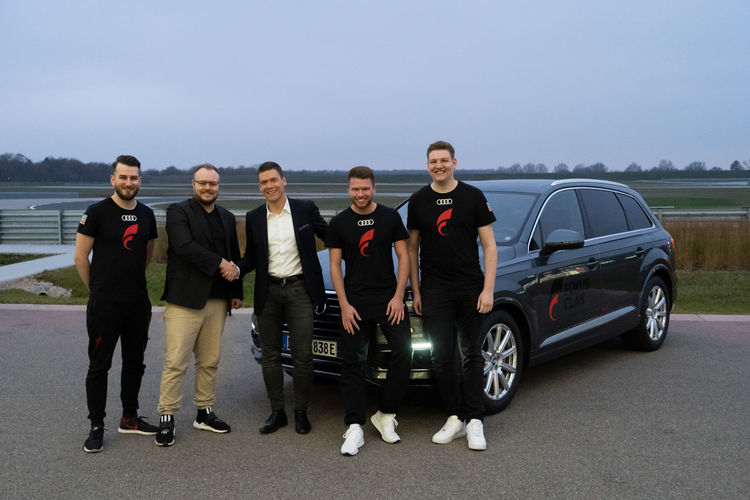 Audi is taking the next step in its commitment to sports sponsorship and has concluded two new partnerships in the field of esports. The premium brand is now cooperating with the esports organisation FOKUS CLAN and intends to position itself in the professional gaming environment over the long term. The cooperation is initially planned to last three years. Together with Media Markt, Audi will also become a partner to the esports team of FC Ingolstadt 04.

Audi has been an active sponsor of traditional sports for many years. With the new partnership in esports, Audi is expanding its sponsorship portfolio and creating a close connection to gaming and entertainment. The brand with the four rings is thus complementing its communication strategy on a digital level with an accompanying increase in its presence on social networks and in the electronic sports environment. The growing importance of esports over the years has also brought new and innovative opportunities for brand communication. For the Ingolstadt-based company, this new partnership is an important addition to its successful integration in racing simulations such as the Gran Turismo computer game series.

FOKUS CLAN is a professional esports team that plays the FIFA football simulation from EA SPORTS. The team consists of the three German e-athletes Matthias ‘STYLO’ Hietsch, Lukas ‘Sakul’ Vonderheide and Danny ‘Proownez’ Liepolt, who recently qualified for the international “FUT Champions Cup” in Bucharest (30 November - 2 December 2018). Under the leadership of STARK eSports, the still young organisation wants to develop into the best FIFA team in the world.

“We want to continue the impressive development of esports and are delighted to have gained Audi as a strong partner,” explains Dennis Andreas Nirtl, Managing Director of STARK eSports. “We are proud to have Audi on board as a very experienced player in sponsorship and are convinced that we can deliver sustainable added value for all those involved.

As part of the partnership, initiated in cooperation with STARK eSports, Audi will be present on the team clothing and social channels of FOKUS CLAN, among other things. Numerous joint activities are also planned. Among other things, the premium brand will provide the esports team with a specially branded Audi Q7 e-tron with integrated Sony PlayStation 4 for the first six months for joint promotional activities.

“esport opens up new and exciting marketing opportunities for us. esport is dynamic and far more flexible than many traditional sports. This enables us to shape many things and actively participate in their further development,” says Thomas Glas, Head of Sports Marketing at AUDI AG. “The young and, above all, digital and technology-savvy target group with an enormous reach and strong global networking is interesting. This makes a commitment to esports particularly attractive for Audi and ideally complements our digital communication strategy.”

Together with Media Markt, Audi will also support the esports team of FC Ingolstadt 04 with the professionals Hasan ‘hasoo19’ Eker and Andreas ‘ANDY’ Gube. The two professionals will be managed by STARK eSports. With the help of a scouting event on 9 December at the Audi Sportpark Ingolstadt, further local talents will be found who will have the opportunity to complement the team. After a planned coaching phase, they, together with ‘hasoo19’ and ‘ANDY’, will represent the Ingolstadt team in national and international competitions.

The car manufacturer is not a newcomer to esports. The premium brand sponsors Bayern Ballers Gaming (NBA2K), the esports team of FC Bayern München Basketball. In addition, Audi Denmark has already supported the Astralis esports clan as part of a product campaign.

The first professional esports club that focuses 100 percent on digital football. An esports brand that lives according to the values of real sports. One of the team’s goals is to be a role model for young gamers and the next generation of FIFA esports athletes. FOKUS CLAN was founded in January 2018 by professional FIFA e-athletes and influencers and offers an attractive content platform with a large digital reach. (https://fokusclan.gg/)

The company with offices in Bochum and Zurich is one of the leading esports agencies in Europe. Founded in 2015 by former professional players and esports enthusiasts with an almost 20-year track record in the gaming industry, STARK eSports is now the lead agency responsible for the eSports involvement of numerous national and international brands, associations and top clubs. STARK works with clubs such as VfL Wolfsburg, Hertha BSC, VfB Stuttgart, SV Werder Bremen, FC Schalke 04 and FC Ingolstadt in Germany. (http://www.starkesports.com)