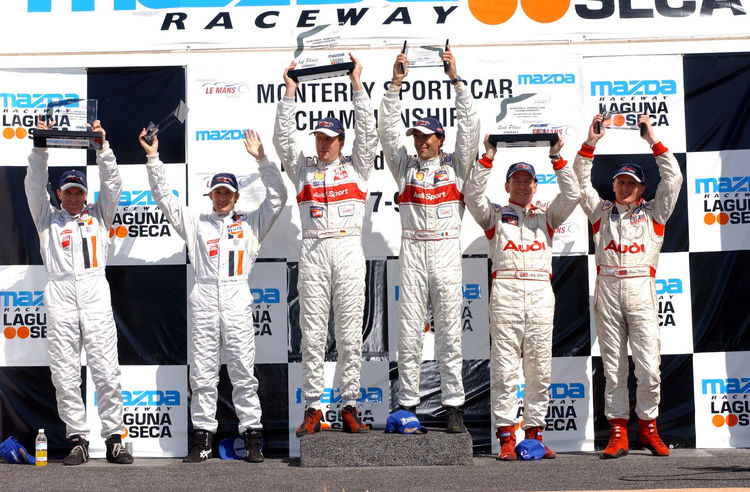 For the second time in a row Audi has won the title in the American Le Mans Series (ALMS). After a 1-2-3 victory at Laguna Seca (California), Audi has already clinched the Manufacturers championship. Also Team Audi Sport North America cannot be overtaken in the Teams championship in the finale at Road Atlanta. And only the four Audi works drivers Frank Biela, Rinaldo Capello, Tom Kristensen and Emanuele Pirro can win the Drivers title.

Team Audi Sport North America, however, had to fight hard once more for success at Laguna Seca. Pole sitter Rinaldo Capello spun at the first corner and found himself at the back of the field with the #1 Infineon Audi R8. Driving the #2 sister car, Frank Biela had a tough battle with Jan Magnussen´s Panoz and Johnny Herbert´s Champion Audi R8, switching the lead more than once.

The preliminary decision came just before mid-distance: Magnussen retired after clashing with Herbert, Tom Kristensen had to park the #1 Infineon Audi R8 due to clutch failure.

As the second Panoz retired following collision damage shortly afterwards, only the remaining Infineon Audi R8 of Frank Biela and Emanuele Pirro and the customer R8 of the Champion team remained in the frame for victory. A 20 second penalty against Herbert because of the collision with Magnussen and the fact that Team Audi Sport North America changed tyres only once, decided the race in favour of the Audi works team.

The Audi works team, however, had to wait for its seventh ALMS victory of the season until the very end: A 38-second advantage Pirro had after his last pit stop, shrinked rapidly because Andy Wallace had fresher tyres. In the end, Pirro crossed the finish line just 1.6 seconds ahead of the customer R8.

The team of Stefan Johansson completed the total Audi success at Laguna Seca finishing third despite Patrick Lemarié being involved in a start collision dropping him to 26th position at the end of the first lap.

Frank Biela (#2): “This was a tough race. I had a good start, the Panoz, however, had a little advantage in the beginning because its front tyres were reaching the correct temperature quicker. It took me four / five laps to speed up and then I was faster. From that moment on everything went well and we could control the race more or less. It was close in the end, but we did it.”

Emanuele Pirro (#2): “In the final laps there was no more rubber on the front tyres, because we changed the tyres a bit early. I tried to be very safe, because there was no more grip, so I could only try to make it to the end. I am so happy we did it and it is a good lesson for life: You should never give up. We looked to be out of the picture halfway through the championship, now we are back.”

Rinaldo Capello (#1): “I did not want to take any risks at the start. Maybe I was a little bit too conservative. When I saw Frank inside I could not close the door because otherwise our two cars would have touched. I came a little bit off the line and lost the car under acceleration. I had the feeling somebody touched me at the rear. We have really bad luck in recent races.“

Tom Kristensen (#1): “The championship is almost gone for Dindo and I. When I got in the car, I immediately felt the clutch slipping more and more. In the end it broke. This has never happened before.”

Stefan Johansson (#18): “Patrick was unlucky at the first corner which put us to the back of field and then the engine mysteriously cut out and I coasted in to the pits losing more time. We filled it with fuel and it fired up again. In many respects we were fortunate to finish third.”

Patrick Lemarié (#18): “There seemed to be four cars abreast at the green flag and then Herbert bumped me in to a spin at the first corner. The rear diffuser was broken from that moment which made it difficult to drive so after starting from the front row, I"m a little disappointed.”

Johnny Herbert (#38): “The start was hectic with cars touching each other at Turn 2 and further around the opening lap but I survived. The car was handling well and I quickly settled in to third place. It was a harsh decision to penalise me when Magnussen and I made contact. It"s my best ALMS result in
five starts so hopefully we can go one better in Atlanta.”

Andy Wallace (#38): “The car was good which enabled me to push hard. We took tyres on while Pirro did not at his last stop and so that helped our cause but as it turned out we needed just another couple of laps. The Champion Audi team have done a great job in recent races.”

Reinhold Joest, Team Director Audi Sport North America: “After a thrilling start, a tough fight and thanks to a perfect pit stop strategy we finally made it. We are very happy to be on top of the podium after we had a long haul. Dindo and Tom had bad luck with the mechanical failure of their car. In motorsport, a change in form sometimes happens very quickly. Now it looks like either Frank or Emanuele will become champion.”

Dr Wolfgang Ullrich, Head of Audi Sport: “It was a very good race. Too bad we had the clutch failure in our car number one. Tom could not make it up the hill and therefore couldn"t come back to the pits. Frank and Emanuele drove a faultless race and also our customer teams produced a very good performance. We are happy to have defended our titles in the Manufacturers and Team championship. That was important for us. Now the last race will bring the decision who of our drivers will get the drivers title.”