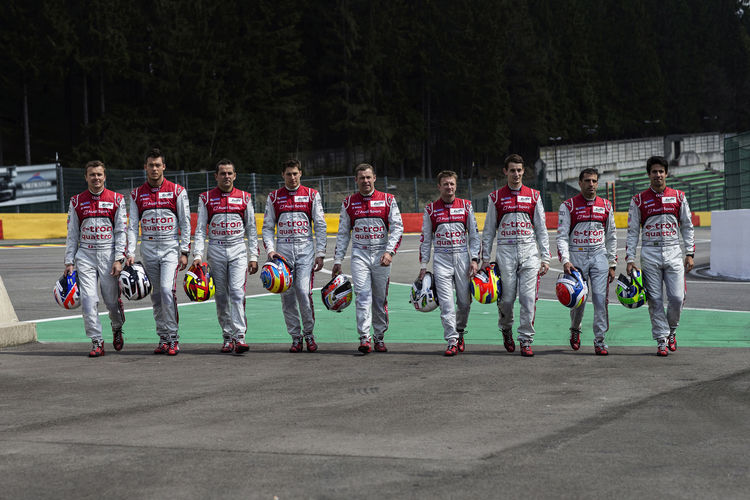 Since 2000, Audi has been celebrating great successes in the world’s most important endurance race with technological innovations. But none of the eleven victories would have been possible without a compelling driver squad.
Download PDF (160 KB)
Facebook
Twitter
LinkedIn
WhatsApp

Three more weeks until the Le Mans 24 Hours celebrates its 90th anniversary. Since 2000, Audi has been celebrating great successes in the world’s most important endurance race with technological innovations. But none of the eleven victories would have been possible without a compelling driver squad. Head of Audi Motorsport Dr. Wolfgang Ullrich explains his personnel strategy.

“For us, it’s important to have race drivers in the squad who also fit the Audi brand well in terms of their personalities,” stresses Dr. Ullrich, who has been at the helm of Audi Sport since November 1993. The first driver signed by the Austrian was Emanuele Pirro. He remained under contract for 15 years and today is a brand ambassador for the company. His compatriot Dindo Capello, who has since acquired shareholdings in three Audi centers in Italy, was an Audi factory driver even for 19 years, and Frank Biela for 18. All of these are unusually long and successful top-caliber careers – particularly in the service of one and the same brand. All three have won the Le Mans 24 Hours with Audi as well. Frank Biela and Emanuele Pirro did so together five times.

The outstanding successes of Tom Kristensen, who with eight triumphs under his belt is the record holder at Le Mans, will always be linked to the Audi brand as well.  Allan McNish at the wheel of Audi sports cars has shaped the race at La Sarthe just like Marco Werner has. And the next generation of drivers is leaving no stone unturned to become equally successful: Marcel Fässler, André Lotterer and Benoît Tréluyer (CH/D/F) have been unbeaten at La Sarthe since 2011 and are the current FIA World Endurance Champions.

“We’ve always managed to make our drivers feel like ‘Audians,’” says Dr. Ullrich. “The brand with the four rings supports us in this. Audi has always clearly indicated how important successes in motorsport are and that the brand likes to see the race drivers as ambassadors. Our drivers are proud to be able to compete for the Audi brand that is so successful.”

While the Le Mans challenge has always been a great one, the requirements profile has changed. “The talent has got to be very strong, but it’s not strictly about sitting in a car for a longer period of time and driving consistent lap times anymore,” says the Head of Motorsport. “Today, we need drivers who manage to complete a real 24-hour sprint in the team without making any mistakes. That’s why we’ve always signed driver personalities who caught our attention with their performance potential and ability to assess risks, and who thus rarely had accidents.”

In addition to these traditional traits, there is a lot more involved for Dr. Ullrich: “Our drivers have to be team players and identify with the brand. Then they will form a unit together with the Team Director and the Head of Sport. Everyone pursues their aims together and everyone supports each other, especially in difficult moments. The drivers have to be willing to put individual interests aside.”

Driver pairings for Le Mans have repeatedly had to be recombined. Dindo Capello, Tom Kristensen and Allan McNish were driving together for seven years since 2006 – there is arguably no other professional endurance racing team that can claim such longevity. “Accordingly, finding a successor for Capello after the end of his career was a major challenge,” says Dr. Ullrich. “We were seeking someone who was driving at a very high level and who was well-matched with the personalities of the other two. In Loïc Duval, we found a superb solution.” A third team was newly formed as well: Marc Gené (E) competes with Lucas di Grassi (BR) and Oliver Jarvis (GB). “You can only tell how good a driver squad functions after it’s driven together. A single race is typically not enough for this.”

The Head of Motorsport regularly grants approval to his drivers to participate in other events as well – Mike Rockenfeller, for instance, won the Daytona 24 Hours in 2010 at the wheel of a Daytona prototype. “I’m convinced that it’s good for a race driver to have a wish like this fulfilled,” says the Audi manager with certainty. “He can work on his range of driving skills and receives new impulses concerning the approaches used by other teams. And this has always had a motivating effect, and thus in the end paid off for Audi as well.”

At the moment, Marcel Fässler, André Lotterer and Benoît Tréluyer are celebrating great success – from two consecutive Le Mans victories to the FIA WEC World Champion’s title in 2012. Prior to being signed by Audi in 2010, none of the three drivers had ever been on the podium at Le Mans. “This is a combination of three exceptional talents,” praises the Head of Motorsport. “Here, a squad has formed that has absolute trust in each other. And every member is on a great performance level. This means we’ve got three absolute sports car stars together in one car. And they’ve personally grown so close together that they’re extremely united and thus exceptionally strong.”

Marcel Fässler, André Lotterer and Benoît Tréluyer are not the first successful trio of Audi – and certainly not the last.