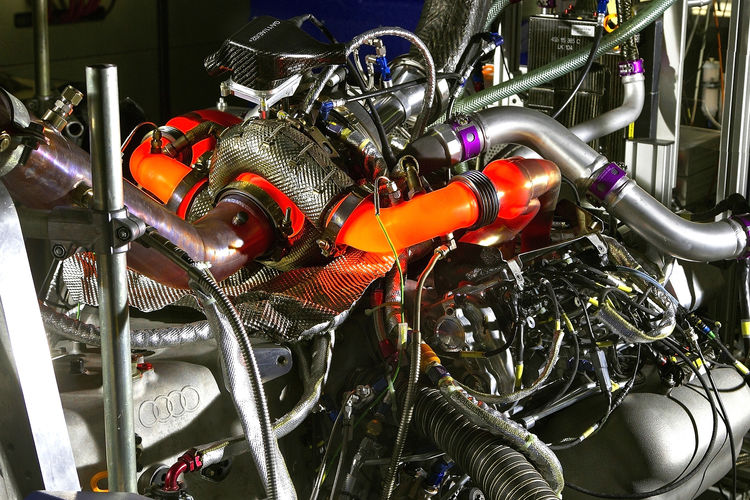 One more week before the Le Mans 24 Hours celebrates its 90th anniversary. 15 years of engine development have been shaping Audi’s prototype racingcommitment. Through intensive development work the engineers have repeatedly compensated for the restrictions imposed by the regulations while consistently enhancing efficiency of the engines fielded.
Download PDF (159 KB)
Facebook
Twitter
LinkedIn
WhatsApp

One more week before the Le Mans 24 Hours celebrates its 90th anniversary. 15 years of engine development have been shaping Audi’s prototype racing commitment. Through intensive development work the engineers have repeatedly compensated for the restrictions imposed by the regulations while consistently enhancing efficiency of the engines fielded.

Two major eras have shaped Audi’s commitment at Le Mans from the perspective of Ulrich Baretzky, Head of Engine Development at Audi Sport: Until 2005, gasoline engines powered Audi’s LMP race cars, since 2006 the engines have been diesel units. For Audi, this is linked to numerous innovations.

-The Le Mans project began with a 3.6-liter gasoline engine that delivered around 400 kW (544 hp), and over 449 kW (610 hp) only a year later. A major stride achieved in 2001 was TFSI gasoline direct injection being used for the first time. It significantly reduced fuel consumption while drivability and response behavior substantially improved. At the pit stops, the time for starting was shortened by up to 1.3 seconds because the directly injected fuel was burned more directly. The Audi team transferred the technology that was tested in racing into production cars when the first models with FSI and TFSI engines delivering fuel economy benefits of up to 15 percent were launched.

-Only five years later, Audi celebrated a pioneering achievement with the TDI engine at Le Mans. After Audi, as the inventor of the TDI, had offered its first production model with this technology in 1989, the brand immediately clinched the first victory of a diesel-powered sports car at Le Mans in 2006. From 5.5 liters of displacement, the V12 engine of the Audi R10 TDI developed more than 478 kW (650 hp). Particularly impressive was its torque of over 1,100 Nm. This was the first Audi diesel engine with an aluminum cylinder block.

-Audi’s diesel engine development directly benefited from Le Mans technology. Experiences gained in pre-development were fed into the first racing pistons. The injection system with two high-pressure pumps and piezo injectors has been refined by Audi for maximum specific performance and best efficiency in racing. The injection pressures of the hydraulic system and the ignition pressures in the cylinder have continually been increasing to this day. This way, combustion and power output could be optimized, which has been beneficial to production development as well. Today, injection pressures of 2,800 bar are achieved in racing and 2,000 bar in production cars.

-Variable turbine geometry (VTG), which has long been in standard use in volume production, was introduced into racing by Audi in the V10 TDI in 2009, following several years of development. The biggest challenge was posed by the high temperatures of over 1,000 degrees centigrade. VTG technology clearly improves response behavior. In 2010, Audi with the R15 TDI not only celebrated victory at Le Mans but, after completion of 397 laps and 5,410 kilometers, broke the absolute distance record, which had existed for 39 years.

-The most incisive change, as well as a major technical achievement by the Audi motorsport engineers, was brought about by the engine regulations for 2011. For diesel engines, the regulations forced the engineers to reduce the volume by 1.8 to 3.7 liters. Audi developed a V6 TDI engine packed with innovations. The exhaust side is located inside the V with its 120-degree angle (‘hot side inside’). A double-flow mono-turbocharger is fed with the exhaust gas from both banks and its compressor is of a double-flow design as well.

-The Audi engineers respond to ever more limitations by making continuous progress. For example, the diameter of the air restrictor in the diesel era since 2006 was reduced by 34 percent. Boost pressure decreased by 4.7 percent and cubic capacity by almost 33 percent. Absolute output dropped from over 478 kW (650 hp) to around 360 kW (490 hp) today, in other words by 24 percent. Considering this, the increases achieved with respect to specific outputs are particularly noteworthy. For instance, the engine output per liter of displacement went up from 87 kW (118 hp) in 2006 to 107 kW (146 hp) in 2011 – a gain of nearly 24 percent. The piston area output – which is the measure for the output delivered by each individual cylinder – during this period of time grew from 40 kW (54 hp) to an amazing 66 kW (90 hp), in other words by 65 percent. Even more impressive is the development of fuel consumption. Audi has improved consumption per lap in racing operations at Le Mans from the first to the most recent generation of diesel engines by more than 20 percent, while the engine’s output per liter has clearly increased.