Audi are DTM manufacturers’ champions and win all three titles 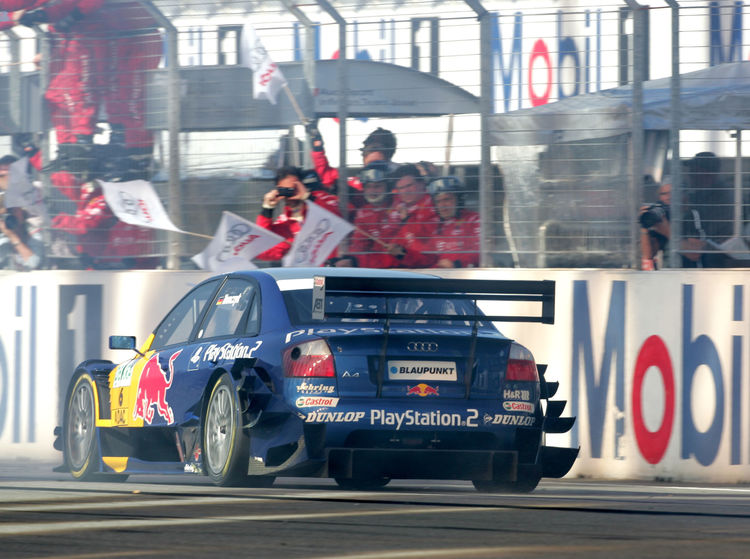 In the DTM finale at Hockenheim Audi have successfully put the finishing touches on the brand’s aim to achieve a total triumph in Europe’s most popular touring car series: in front of a record audience of 133,000 watching the event throughout the weekend, and after having locked in both the drivers’ and teams’ titles early, AUDI AG also claimed title victory in the DTM manufacturers’ competition. Best driver of the Audi squad at Hockenheim was Martin Tomczyk, who throughout the race fought a thrilling battle for victory with DTM record champion Bernd Schneider to come in second, merely 1.635 seconds behind the winner. With a fifth place overall, Tomczyk finished the season as the best German driver. Tom Kristensen clinched fourth place both at Hockenheim and overall, thus being the best rookie of the year. Christian Abt – finishing eighth – scored his first point at Hockenheim. Frank Biela came in eleventh, Emanuele Pirro retired after a collision in the starting lap.

Martin Tomczyk (Audi Sport Team Abt / Audi A4 DTM #6)
2nd place, + 1.635s
“First of all, congratulations to Audi and to my team. I’m proud to have contributed my part to our exploit of clinching the manufacturers’ title as well. But I’m also proud of my own performance. During the whole race I had a tough but fair fight with Bernd Schneider. Today’s race has been one of the best in my career so far.“

Tom Kristensen (Audi Sport Team Abt Sportsline / Audi A4 DTM #12)
4th place, + 12.454s
“My thanks to Audi for a fantastic year. I also want to thank my team, my crew and – above all – my race engineer, Frano. My car was quick here the whole weekend. In the first lap, I was able to move up by a few places. After the second pit stop, though, I lost a lot of time behind Mücke and Reuter. That deprived me of the chance to overtake Paffett. With Alesi, Mattias’ help came in perfectly. He was able to take a bigger risk than I.“

Mattias Ekström (Audi Sport Team Abt / Audi A4 DTM #5)
6th place, + 13.010s
“I think we’ve put on another spectacular show for the audience today to close the season – and literally all the way through to the final corner at that. In the beginning, my car was feeling unstable, and I wasn’t able to keep up with the pace at the front of the field. But in the second half of the race, my A4 was again as perfect as usual. I overtook Albers and, in the end, was quicker than Jean Alesi, who put up a strong fight though. The way we outfoxed him in the last turn – that’s something Tom and I won’t forget for a long time.“

Christian Abt (Audi Sport Team Abt Sportsline / Audi A4 DTM #11)
8th place, + 27.891s
“That was a good race, and the performance of the car was super. With a better starting position, there could have been more in it for me, because I got caught behind Timo Scheider for a long time. But – I did score my first point. All four cars from our team finished in the points and we’ve won the manufacturer’s title – what more do we want?“

Frank Biela (Audi Sport Infineon Team Joest / Audi A4 DTM #45)
11th place, + 51.011s
“My car was oversteering extremely, and there was a excessive wear on the tyres. Things simply weren’t going well. My start was not good and so was the first lap, and then there was also the tyre problem – more than 11th was not possible.”

Emanuele Pirro (Audi Sport Infineon Team Joest / Audi A4 DTM #44)
Retired (accident)
“After the warm-up, I was looking forward to score points. My start was pretty good. But after the hairpin – in the first lap on the straight – I was hit on a very bad way several times. The suspension was damaged in these incidents, and that was a great disappointment.“

Hans-Jürgen Abt (Team Director Audi Sport Team Abt Sportsline): “This has simply been a super sporting event. We’ve achieved the goal we set for ourselves brilliantly. Although it may not have looked that way in the beginning, at the end of the day, our strategy proved to be the better one. ‘Well done’ to all. I’m happy that Audi are bringing home the manufacturers’ title to Ingolstadt.“

Ralf Jüttner (Technical Director Audi Sport Infineon Team Joest): “The spectators got to see a thrilling race. Congratulations to Audi on winning the manufacturers’ competition as well. Claiming all three titles right in the first year is a fantastic achievement. Unfortunately, our team was not very lucky here: Emanuele was sandwiched right in the first lap, and Frank suffered excessive tyre wear.“

Dr Wolfgang Ullrich (Head of Audi Motorsport): “The fact that we’ve claimed the manufacturers’ title is the icing on the cake of a fantastic season. I’m very happy for the whole Audi squad, and every single team member can be proud of what we’ve achieved this year. After the race at the Norisring, we didn’t necessarily expect to clinch the manufacturers’ title, and this makes our joy even greater. The finale was a thrilling race through to the end and a nice close of the season.“