Audi and Ekström from hunted to hunter 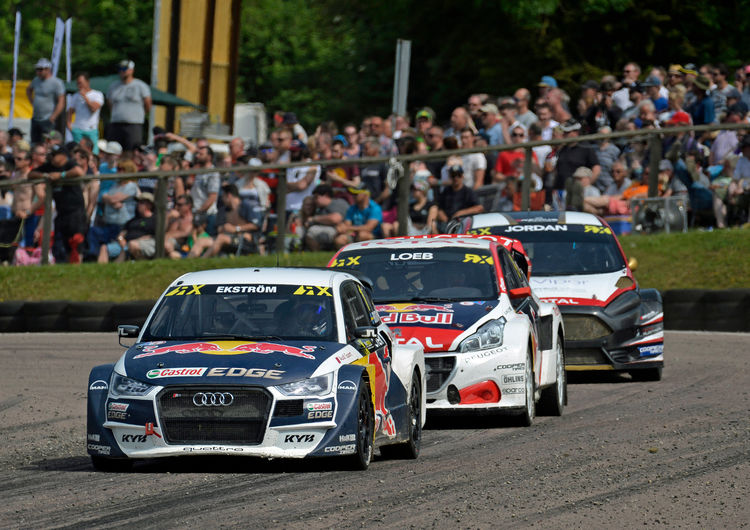 Mattias Ekström finished fifth in the fifth round of the FIA World Rallycross Championship 2017. At the birthplace of rallycross in Lydden Hill, the reigning World Champion missed a podium finish and was forced to surrender his overall championship lead to Volkswagen driver Johan Kristoffersson. EKS holds third place in the team classification.

To mark the 50th anniversary of rallycross at the Lydden Hill Race Circuit, Ekström and his team mates Toomas Heikkinen und Reinis Nitišs experienced a weekend with several obstacles. “I started well and held third place consistently in the qualifying sessions behind the strong Polos,” said Ekström. “In the semi-final, things weren’t quite right, which is why I had to start the finale from the third row.” After making a good start and a thrilling battle with Sébastien Loeb, a tire failure dropped the Swede down the order. At the end, he finished fifth. “We have to be honest. Winning here was never on the cards, but a podium finish was. But to achieve this, everything would have had to run perfectly."

Ekström also lost the overall lead in South East England. The Swede had topped the standings for 253 days across two seasons. The former hunted has now become the hunter. “I’m only four points behind Johan Kristoffersson,” said Ekström. “In rallycross things can change very quickly. It’s possible to score 30 points on a weekend. We’ll be back and will attack from the word go at the next round in Norway.”

Toomas Heikkinen qualified for the semi-final for the fifth time this season, but missed the final after finishing sixth. “The semi-final is always the minimum goal. It’s disappointing that it wasn’t quite enough again this time, but the engine failure on Saturday had me playing catchup immediately,” explained the Finn. Nitišs fared much worse and as 16th overall was demoted to spectating after qualifying. “I’ll have to forget this weekend quickly and look forward. I have fond memories of Norway.” In Hell in 2014, Nitišs at the age of 18 years and 181 days became the youngest driver to date to win a World Championship round in the Supercar Class. The sixth round of the season is held on June 10–11.