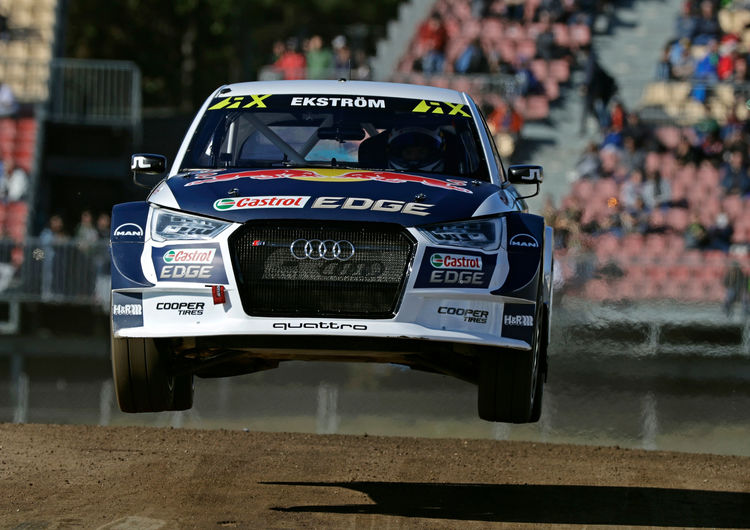 The FIA World Rallycross Championship will be entering round two at Montalegre, Portugal, next weekend (April 22 and 23). The town near the Spanish border merely has a population of 1,800, but motorsport fans have been flocking to the venue in large numbers in recent years.

Following his victory in the season opener at Barcelona, World Champion Mattias Ekström is traveling to Portugal as the front runner in the drivers’ championship. “The start could hardly have gone better. Now we have to up the ante at Montalegre,” says Ekström. “I have good and bad memories of last year. Everything was going according to plan up until the semi-final, but then a mistake in turn one cost me the final. As a result, the Circuito Internacional de Montalegre, besides the new track in Cape Town, is the only one on the World RX calendar on which the Swede has never made it into the final – unlike his Finnish teammate Toomas Heikkinen, who in his first race for EKS in 2016 immediately took third place there.

At first glance, the track layout featuring a 250-meter long start-finish straight promises few challenges, but the devil is in the detail. The long Joker section every driver has to complete once per race hardly offers grip. In the subsequent weave of turns, the extremely high curbs do not forgive any mistakes. In addition, overtaking is extremely difficult because, except for turn one, there are few opportunities to “brake past” rivals on the 945-meter track which is the shortest one on the calendar.

Unpredictable as well is the weather. In 2015 and 2016, following torrential rainfalls, the races at Montalegre were more akin to a mud festival than to a motorsport event. “The difficult weather conditions made driving extremely difficult, but if you want to mount the very top of the podium on Sunday, you need to have the right setup for any weather,” says Ekström, adding with self-confidence. “And we do!” In addition to the lead in the drivers’ championship, Ekström, together with Heikkinen, would like to defend the top spot in the teams’ standings as well, which EKS is leading tied on points with Team PSRX Volkswagen Sweden. The EKS team with Ekström and Heikkinen is completed by Reinis Nitišs from Latvia, who is on the grid at all twelve rounds of the season in the team’s third Audi S1 EKS RX quattro.