Audi and EKS: points instead of podium 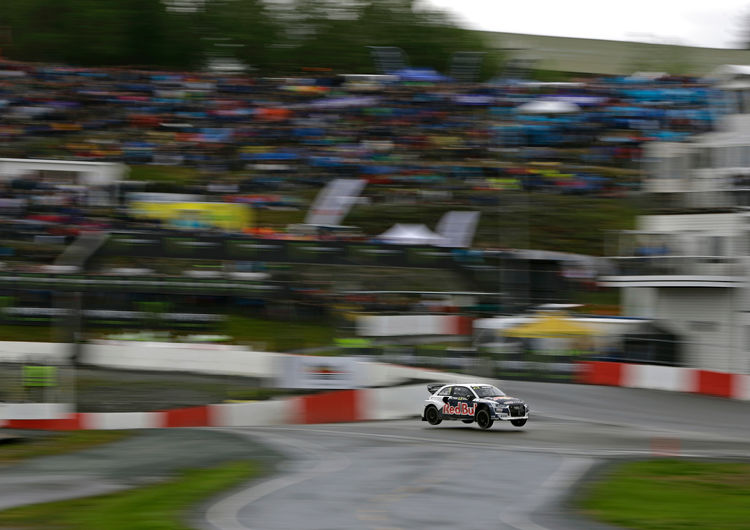 Mattias Ekström took fourth place at the sixth round of the FIA World Rallycross Championship 2017 in Hell. In his tenth World Championship finale in a row, the defending rallycross World Champion missed yet another podium finish by 0.4 seconds. In the overall standings, the Swede still holds second behind compatriot Johan Kristoffersson. In the teams’ classification EKS is third at the half-way stage of the season.

Ekström made a flying start around the rollercoaster track in Norway. Despite torrential rain, the Swede coped the best with the slippery track at the wheel of his Audi S1 EKS RX quattro, and led the overall classification after the first day. “I was a little surprised that we were so fast in the wet, but that was quattro weather,” joked Ekström after the final. “In the dry conditions on Sunday, we struggled again to match the pace of the competition. In the final we lost crucial ground right at the start. This was our own mistake and this ultimately cost us the podium finish.” Although Ekström leaves Norway without a trophy, he still scored 23 important points for the overall standings. After six of twelve rounds, the World Champion is eight points behind the leading VW driver Johan Kristoffersson.

Ekström’s team mates Toomas Heikkinen (FIN) and Reinis Nitišs (LV) also made the semi-final runoffs for the twelve best drivers. However, with fifth and sixth places the two EKS drivers had to bury any hopes of making the final. For the first time all three Audi S1 EKS RX quattro competed together in the same semi-final. “I have reached the semi-final in all six rounds this season, but only once the finale,” says Heikkinen deflated. “This is not my goal.” Nitišs summarizes similarly: “I had a weekend with several setbacks – a puncture in qualifying 2, Ken Block made a hard move on me in the semi-final and then it’s simply not enough,” analyzed the disappointed Latvian. For Audi and EKS the World Rallycross Championship continues on July 1–2 in Höljes. The race weekend in Sweden is not only something very special because it is the EKS home race. During the so-called WRX ‘Magic Weekend’ in Höljes Motor Stadium, the team also celebrated victory here in 2014 and 2015.